I am SO glad that you said Priests have supernatural power. Obviously, random people can't run around consecrating and blessing things, but it's so nice to have it in words. I think people have forgotten that! Seriously! Which leads me to my question... in my parish, every time there is an anniversary of note, at the end of mass he asks the couple, e.g. 'Ed and Myrtle', celebrating their 70th anniversary, to stand for a special blessing. He then asks ALL OF US to raise our hands over the couple. WHAT??? I refuse to do it, and sit there feeling dejectedly creepy for the duration of the blessing. Is this okay? Should the priest be doing this? Is there something I'm missing here? I just feel that it's demeaning to the priest's authority, his specialness, his, yes indeed, SUPERNATURAL POWERS for every Tom and Jane in the building to do it, too. What do you think?

We can be thankful that no one names their beautiful little baby girl Myrtle any more. Don't you want Myrtle to have your blessing? Doesn't she have enough to bear running around with the name Myrtle? Hasn't she had to endure years and years of turtle jokes?

You do say, "Bless you" when someone sneezes, right? It's okay for you to bless them. At the anniversary Mass, you are just giving this old couple your blessing. It is not a supernatural blessing. It is just you praying for God to bless them. You're just raising your arms is prayer is all. If nothing else, the arm raising helps you focus and stop giggling because the poor woman is named Myrtle. The priest is giving a special blessing using his supernatural powers to bestow the blessing of God and you are praying for the blessing of God. 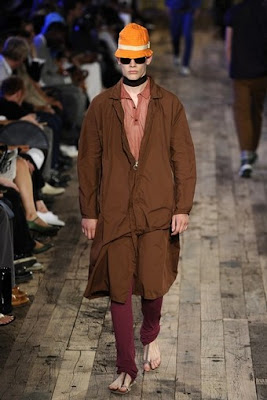 A lot of people feel uncomfortable with the raised arms praying thing. I think they feel it's too, well, separated brethen-y. I'm a 'when in Rome' type, as long as what they're doing in Rome isn't sinful or scandalous. You do have to be a little careful with that. But just because something seems silly or uncomfortable doesn't make it sinful. Case in point, this picture from a fashion show in Rome.

Perhaps we should all put our arms in the air and pray for this poor man who is walking around like this and it isn't even Halloween. Although, you'd never know it from his hat. Where is St. Francis when we need him to jump out and trade clothes with somebody?

As of tomorrow there are only five days left for the Blogger's Choice Awards voting. Thanks so much for your participation. You have our blessing. It' s not special. It's just an everyday type thing. 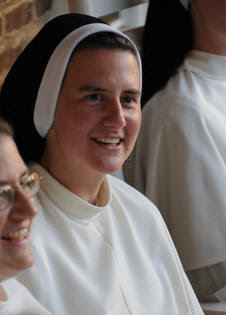 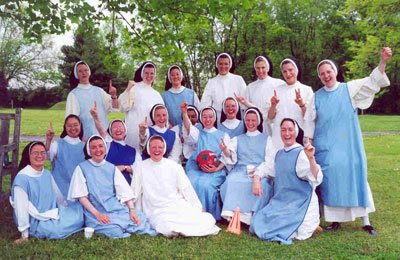 Hey Sister, you have a link to a sedevacantist website on your blog... What do you think about them, by the way?

Lord have mercy! Please don't listen to him Sister! Don't do it, I beg you!

This post is laugh-out-loud funny!!
BTW, I agree-diddly-ee with you on the below post.
I love this blog!

First of all, I don't know how to email you to ask you a question. Am I missing something? So I guess I'll ask my question here, which IS related to this entry:

Since we're talking about blessing people, when did the practice of priests blessing babies and kids at communion start? Is it even allowed by Rome? It bugs me when all these kids get into the communion line, arms crossed against their chests, waiting for their blessing. What irks me even more is the lay Eucharistic ministers giving the kids blessings, too. (Let's face it, not everyone can get in line on the priest's side only, now can they?) If you say it's OK, I'll stop complaining, I promise.

These nuns& sisters are truly a blessing and joy to behold.

I read someplace that the Dominican sisters are the rock stars of the nun world.

My late grandmother's name was Myrtle. I certainly don't have a problem with it.

Sister, I think Matthew is talking about in those "ads by Google". The one for the mostholyfamily. Don't they have their own pope in the Pacific Northwest?

Hi Sister! Thank you for such a wonderful blog! We are participating in the 40 Days for Life campaign (Pray and Fast to end abortion) right now and I've been thinking a lot about true feminism. I do believe there is a HUGE difference between my generation and the previous ones in that there is no longer much of an argument regarding whether or not a baby is being killed. Rather it is simply that today's "feminists" believe it is every woman's choice to do so. I am starting to feel very strongly that the thought process of the entire prolife movement is going to have to shift from the "you are killing a baby" language to a much more pro-woman (feminists for life type)"women deserve better than abortion" mentality in their thoughts and actions, at least at the beginning of the conversation, if we are going to reach today's generation. Without condoning premarital sex, we need to strip away the judgment towards unwed mothers and smother them with compassion. We need to show them without question that they deserve better then abortion and we are going to be there for them to guide them through this. I'm trying to think big and am willing to put the work in but I don't know where to start? What are your thoughts on True Feminism and what is needed if we are to break through the stereotype that pro-lifers are anti-woman?

Hey Sister, I think maybe the "man" in the picture is really a woman.....that makes it even more creepy.
It really bothers me,too, when children go to the Eucharistic Minister for a blessing. I don't mind when they go to the priest, but, as a Euch. Min. myself, I know that my blessing is no better than saying "Bless You" when someone sneezes. I just smile at the little kid and don't do any phoney blessing. If possible I will catch the family after Mass and explain why I didn't bless the child.

As a mother of three, I am wondering why it is a problem for my children to go up for a blessing? Does it hurt anyone for my 2 year old to feel he is a part of the mass? He sees his big brother and sister receive the Eucharist, and wants to be part of this wonderful experience. Didn't Jesus say let the little children come to me??
:) Tami

Oh, I wish the group picture of the Dominican Sisters was bigger! I'm pretty sure I recognize 3 of them but can't tell for sure.

And regarding blessings, our Archbishop has explained why this act though well intentioned is not proper as a liturgical function of the laity. He provides a beautiful response for the Extraordinary Ministers which still allows for the faithful to come forward even if they are not receiving, but it would be an invitation to spiritual communion not a blessing they would receive from an EME.
http://www.archden.org/archbishop/docs/2_12_03_liturgy_communion.htm

Charlotte- I had to laugh (not everyone can be in the priests' line), it's true, but I do my very best to make sure I am... weaving, waiting, only sitting on the side I know he'll be on (unless he gets sneaky and switches for fun).
MaryM- I'm glad someone gets what I'm saying, I do agree with SMM, however I don't know that the other church-goers necessarily understand (especially children), the difference. I sure hope they do, but you never know!
Thanks for the answer, SMM!