Boy oh boy. Can I say that? I think I can. Today's reader question:


Is it okay to say Oh my goodness or oh my gosh? I had a priest once scold me saying I was still using the Lord's name in vain.

Was he eighty-six and cranky? 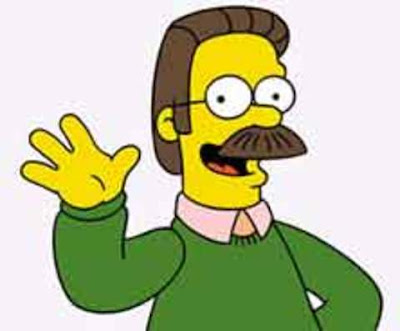 A lot of people would agree with him. Those people all run around sounding like Ned Flanders.

How are you not saying "Hell" if you are spelling it with hockey sticks?

"Gee" is supposed to be short for "Jesus". I guess for people who can't spell. I'm not sure where we're going with "golly gee". I wonder if Mary ever called Jesus "Jee"?

So, the priest is right. Someone better tell Sarah Palin. I think she's been running around saying, "Gosh darn" about seven thousand times, which really means something much more sinister and Lord's name in vain taking than anyone's given her credit.

Were you trying not to say "God" and that's why you said "Goodness"? And you knew that "Goodness" really meant "God" and so you were just trying to take the Lord's name in vain clandestinely?

I wouldn't worry about it too much. I guess now that you know you're going to have to go all Ned Flanders on us. But really....most people living today are not aware that these words are substitutions any more than they know that Halloween just means Holy Eve. It's not as though you really meant to swear or were trying to scandalize anyone.

Sin is about intent. I think we have bigger sins to fry diddlely eye. 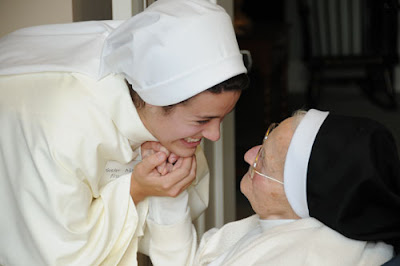 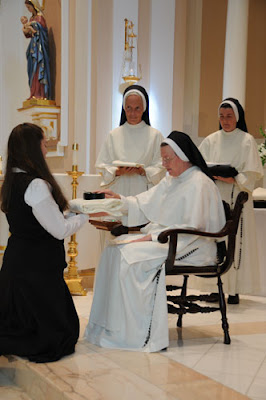 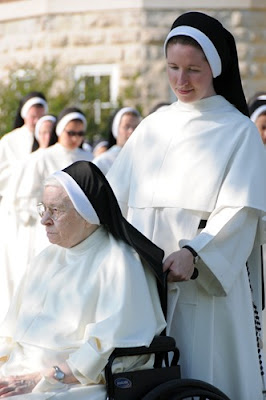 Jen sent six altogether so tomorrow we'll have a gander at the other three.
Posted by Sister Mary Martha at 5:29 PM

Doggone it, Sister, it pains me terribly to ever disagree with you, because I know that you are always right and I am always wrong, but I think I must disagree nonetheless. As you say, sin is about intent. The sin of the second commandment is about loosely using the actual name of God (really, it should apply to YHWH in and Jesus only, but it makes sense for us to apply it also to "God" as well). But the intent when we say something like, "Oh my gosh" is not to say the Lord's name in vain, but rather to find some suitable expression of excitement. By saying "gosh" we are suitably expressing that excitement without using the name of God in a non-sacred manner. But that is the sin, sullying the actual name, profaning the name, or using the name of God without recognition of the sacredness of the name. But since there is nothing sacred about "gosh," and since the intent of the expression is merely a verbalization of excitement, I don't think there is any sin there, not even in a strict interpretation of sin.

Those are my thoughts. The same would apply to "darn" and "shoot" and things like that. They are verbalizations of excitement or anger or dismay or some emotion, that don't involve using crass words that might fall under the spirit of the second commandment, as well.

Hmmm... well, I can't think of any words to comment about the first question, but I know how hard it is to refrain from making those exclamations. I'm trying very, very hard and I pretty much agree with Michael in the post above. (Also, to Michael, fancy seeing you here, it's Mia Feliz from LJ.)

Really, I wanted to say that these three pictures are absolutely lovely. I can't wait to see more.

Also, I did my duty and cast a vote for your blog in Blogger's Choice Awards, it's a vote I can feel confident and cast proudly for.

The Nashville Dominicans are GREAT!!! I actually know someone who is a student at the Franciscan University at Steubenville who is joining the Nashville Dominicans next August. She's 19 or 20, and has already decided that's the life for her, which I really admire. Those Dominican sisters down in Nashvegas really crank out the vocations, let me tell you... They're awesome.

Do you think maybe the mockery for such circumlocutions might atone for the clandestine sin? I have a problem with "Holy Mother of Nod" and "Oh flip!" Much mirth has been aroused, let me assure you. Many lectures on how I need to use profanity have ensued. Granted, none of these lectures have been from Catholics. But they're still my friends... even if they swear like sailors and might some day need St. Vincent to save them from piracy unawares.

Excuse me sister for saying hi back to Michael. You doing all right?

Very educational! Congrats on your position on the Blogger's Choice. Gosh darn it, I hope you win!

We've had the same discussions in our house about what expressions of excitement are appropriate. I tend to lean towards the Batman Style of expression, modifying it for the occassion which requires more variety and creativity. However, they all involve "Holy.." so maybe they're not any better. Perhaps we should all go back to "Jumping Jehosaphat!" or something, though that may be just as bad.

The photos are beautiful - I'm so glad you've decided to post them a few at a time so we can spread our pleasure and inspiration over time.

For me, I know it's hard to to keep my emotions in check and sometimes, things slip out that I don't intend to say. I really try not to even use the euphemisms but that is hard too. Rats.

I was actually thinking about "Holy Cow." It gets said all the time... but I don't know the origin of it. Does it have to do with the sacred cows of India, or the golden calf during the exodus? And so, is it technically offensive?

I think we can make ourselves crazy over this subject. ;-)

I am a completely unrepentant swearer...is swearer a word? I have the manners my mama taught me, and I know when to pull out the bad stuff and when not to, but unless the *intent* was to offend or upset someone, the rest is semantics so far as I'm concerned.

Which is probably why I'd make a lousy nun...

Is it wrong that this subject makes me smile? Ever since I was a young teenager I've used "absurd words" as exclamations - mostly because it made my little sisters laugh. Of course, it is pretty funny to see someone bang their toe and hear them shout, "Pooh Bear!" at the top of their lungs. :) The other one I use a lot is "Blueberry!" Absolutely ridiculous I know, but it's a habit I fell into young and I haven't been able to break it. Remembering how they used to laugh still makes me smile though - and I still think hearing them laugh eased the pain of those stubbed toes and smashed fingers... :) Now my own little boys laugh a bit at my outbursts - but not quite as much as my sisters used to. :)

My personal favorite 'non-swear' is uttered in a tone of weary lament, preferably with forehead in hand: "Oh sweet honey mustard."

Neuropoet, my kids do the same - 'shank' is the 'swearword' from the kid who likes horses 'traffic' is the word of choice for another...and of course they are very amused by the 'shi...taki mushrooms'

What about Holy Cow? hehe...
These pictures are so, so precious....

Sister, please be careful. Some of these pictures have been taken straight from other websites, and are the copyright and property of the original photographer (I have seen many of the Nashville Dominican photos on their own website).

Unless you have the permission of the copyright holder to reproduce the images, you are risking legal trouble by reproducing them on here. I admit I'm struggling to imagine a congregation of Sisters reaching for the lawyers, but if any of the pictures have come from commercial websites, they may well be more litigious.

When I swear I like to say, "WELL MY STARS!!" I kinda like it as it works to dispel frustration but isn't taking Our Lord's name in vain, nor is it saying anything naughty.

Eh, my most common exclamation to express annoyance and aggravation is "Piffle."

Sure do like when nuns cover ALL their hair under veils. That's how it use to be, and some day I believe it will return.