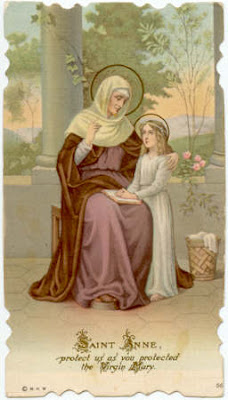 I'm trying to stock up on saints for the upcoming Christmas rush, such as it is over at the shop. I have always been surprised at which saints are the most popular. I would have guessed that St. Ann would be a hot potato. Not that she never sells, but considering that the shop is on a site chock full of sewers, meaning people who sew, not where the dirty water goes, you'd think I'd never be able to keep enough St. Ann's around.

We love St. Ann, don't we? The patron saint of grandmothers, mothers and seamstresses. The truth is she doesn't even make an appearance in the New Testament. Mary's mother is never mentioned at all. Neither is her father. What we think about St. Ann comes from Sacred Tradition. What we know about St. Ann is this: nothing. Not her name, her husband's name, how many other children she may or may not have had, how the family made money, what her hobbies were, if she was a good cook or not. And if she ever sewed a stitch.

We could assume a woman living in those times would have had to sew something a few times. There is a difference between sewing for necessity and being a 'seamstress'. 'Seamstress' implies special skills. I can sew. (If you stand over me with a club.) Sister St. Aloysius is a seamstress.

So I understand that there may be some confusion about St. Ann and what we know about her. But this takes the cakes.

Hey Sister... awesome blog... I don't really know how to contact you other than by comment, so I'll ask my question(s) here in the hopes that you'll notice and answer it (them): Just how many husbands did Saint Anne have? One? Two? Three? Seven? What? Also, how many Marys did she give birth to? I've heard that, in addition to Jesus' mom, she had Mary Cleophas, Mary Salome, Mary Jacobe, et al... so, what's the story here?

Well, I managed to find a source that actually yammers on about all of this. This is the problem with the internet. Just because it's printed here doesn't make it true or even plausible.

The beginning of this saga is a part of Sacred Tradition, that Ann was barren and then had Mary. The rest is.....I don't know what to call it. An over active imagination. 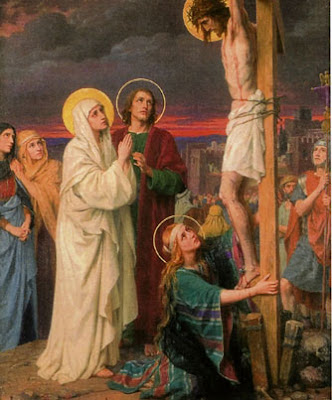 Mary Cleophas and Mary Salome are identified in the New Testament as women who were at the foot of the Cross. After that you're on your own trying to figure out their exact familial relationship to Jesus. Prepare to have your eyes glaze over. Here is what the Catholic Encyclopedia has to say on the subject.

So it appears that the first twisted tale, that makes St. Ann sound a little like some sort of black widow with a string of dead husbands, is a tortured attempt at explaining who these women were.

And after reading the Catholic Encyclopedia's clear as mud explanation, I prefer to chuck the whole thing into the Sacred Mysteries bin.

Sacred Mystery is Catholic for "just let it go."
Posted by Sister Mary Martha at 4:07 PM

You just crack me up. Thank you for seeing the light in the cracks and not the cracks in the light.

I love it! Not everybody is capable of saying, "I don't know."

Now I'll go read what the Catholic Encyclopedia has to say.

I just found your blog, Sister. Hello and nice to meet you. I love love St. Ann. for a number of reasons. I'll hop over to your shop and check out your St. Ann medals. bless you.

I have a question (sort of unrelated to this...). I have a "pagan" (actually neo-pagan) friend who thinks that all our saints are based on pagan gods and Mary is based on "The Mother Goddess". I've explained that saints were all real, living humans that aren't "based" on anyone but themselves, but she still doesn't buy it. Should I just let it go? Is there a patron saint for trying to explain things to stubborn people? Just wondering

Regarding people making up crazy stuff on the Internet and people believing them:

Dear Saint Ann, please help us to be patient with some people's kids.

Hi Sister.
I have so many questions, but I'll just ask the one my husband and I are disputing right now.... Birth Control. He says "no harm, no foul", but I say it's still wrong. If you're trying to control whether or not you get pregnant, you're trying to play God. But he feels with so many teenagers having sex at such an early age, that protection is better than abortion. (We both agree that is TOTALLY wrong.)
Can you help me put into words why birth control of any type is wrong? I'm not getting my point across. Thanks, Sister.

Perhaps I can help. When you say "birth control" you may be referring to "artificial birth control" which includes a wide range of oral contraceptives, patches, or rings. There are a number of settled and pending lawsuits around just about every drug used for birth control, due to the horrific side effects - i.e., death. For example, if you google "drospirenone" and "death" you will have several hits. And, what your doctor may not tell you (or worse, what your doctor may not even know) is that these contraceptives do not actually prevent conception. They are actually abortifacents, which means they prevent a fertilized egg from implanting.
Many married couples find that the more they read and research birth control (in any form) from reliable sources (i.e., not the drug manufacturers, who are primarily interested in profits)the more they come to understand the wisdom of the Church's teaching - which has everything to do with respecting women and nothing to do with a misguided or negative view of healthy human sexuality.
Just make sure whatever you read, he reads, and vice versa. Be fair, open, understanding, and honest with each other. I'll say a little prayer for you!

@Anonymous:
The usual apologetic regarding this is that because we are in the image and likeness of God, appreciation of His nature is somewhat inherent in us. Chesterton called paganism an attempt to reach God through the human imagination. What happens is that pagans observe some thing given to us by God to remind of us Him, or to be a sign of Him (e.g., sex), and mistake the thing for God, which they then worship. This article is about the Church using such cases to evangelize.