A Little Bird Told Me 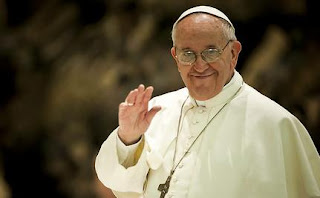 Well, why not?  The Vatican Office on Sin and Forgiveness is all for it.

Did you know the Vatican had an office just for sin and forgiveness? Probably not. It's not called that, but it's actual name is even less well known (if that's even possible). The Sacred Apostolic Penitentiary.  Not to be confused with prison. It's not a Sacred Apostolic jail.

The whole issue of indulgences makes the separated brethren's heads spin, because it's pretty much why we have separated brethren. (Unless we're talking about the Anglican and Episcopal church, that was all about the messy divorce of Henry VII. Very messy, what with all those severed heads.)

I really hate to have to explain it all again. Here goes.

Indulgence: time off of your punishment (purgatory) for sins that have already been forgiven.
Already hard to understand since purgatory is outside of time. There is no time in purgatory but you get time off from the time you would have spent there. Calm down and remember this is what we call a "Sacred Mystery".  "Sacred Mystery" is "Catholic" for "just let it go". And by that I mean, there are things you will never be able to understand because God made it that way and that's okay. 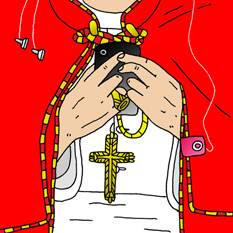 Away back when, you had to climb up steps on your knees or go on a pilgrimage to the Holy Land or fight in the Crusades to earn an indulgence. And then someone rightly pointed out that it wasn't fair that only able bodied wealthy people (because such things are long and arduous and take capital) could earn indulgences, so the Church found other things to indulge. Certain prayers, walking the Stations of the Cross (invented by St. Francis of Assisi for just this purpose), that sort of thing. There are still steps you can climb, not necessarily on your knees.

Which brings us to the tweeting Pope. Attending World Youth Day earns an indulgence. But like going on a Crusade, not everyone can get there. So the Pope offered the indulgence to people who follow what's going on at World Youth Day on social media, which includes Twitter. And now we have some silly headlines.

I'll leave it to smarter people to explain it all better if your hair is still on fire.
Posted by Sister Mary Martha at 12:13 PM

It was Henry the VIII with all the wives and messy divorces. You lost a I there somewhere.

That 30 days indulgence is the same as doing 30 days of one of those early penances--like the sackcloth and ashes or climbing the stairs on the knees or pilgrimage or crusade.

I think explaining the doctrine of indulgences should have an indulgence attached!

I like to tell people that Jesus was the first to offer a plenary indulgence:

Luke 11:41
But rather give alms of such things as ye have; and, behold, all things are clean unto you.

Do you have any idea if the Vatican Office for Sin and Forgiveness (OK, the Sacred Apostolic Penitentiary) has its own letterhead or business cards? Just wondering.

Slightly more seriously, is there a listing of the different offices of the Vatican anywhere on the Web? It would be interesting to see.

Thank you for all the information you give us Sister.