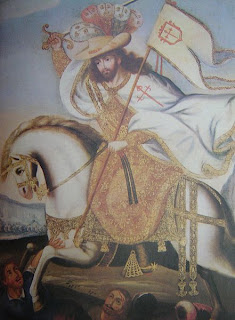 I have to make an important correction! One of my kind readers pointed out my enormous mental lapse in yesterday's post when I said that St. Peter was crucified on a cross shaped like an "X". Of course we all remember the famous story that St. Peter asked to be crucified upside down because he was not worthy to die the same way Jesus did. It was St. Andrew on the "X".
I guess I became thoroughly confused in a pile of Simons. Or...
...maybe I should see a doctor!
I can make it up to everyone today though by some investigative work into the answer to this question:
Sister, I love your blog!
Can you tell me why St. James the Greater is the patron of veterinarians? My niece is in vet school and wanted to know why.
I hope you are not disappointed by the answer. I have to admit, I'm a little disappointed. If I were you, I would go with St. Martin de Porres, who is also the patron saint of veterinarians. Not that there is anything wrong with St. James the Greater. It's just that he had absolutely nothing to do with the care of animals. Nothing whatsoever. St. Martin de Porres, on the other hand, actually did take care of animals and he was a healer.
And St. Francis of Assisi is also a patron saint of animals, running around calling every animal "Brother Wolf" and "Sister Sea Anemone" and the like, preaching to birds and squirrels. That's what most people think about when they think about St. Francis, but he was much more interesting than that. I still hold out for St. Martin de Porres.
But to answer your question, St. James the Greater is the patron saint of veterinarians because he is the patron saint of Spain.
Because he is the patron saint of Spain, he was the patron saint to the Conquistadors. 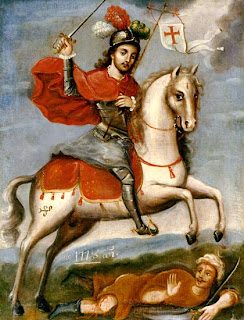 And because Conquistadors rode horses, he is the patron saint of equestrians. And equestrians, and the horses they rode in on, need vets.
I guess.
It's a long way to go, isn't it?
It's an extra long way to go when you also realize that St. James never went near Spain. He may have, but I don't think so. There is a thought that he preached in Spain. I find that dubious. Somehow, though, and by "somehow" I mean some people think angels flew it there, his body ended up in Spain after it was decapitated by one of the Herods. Agrippa, I think. I can only hope St. James' head went along for the trip.
St. James the Greater was a very great saint, though, dog and cat check ups and shots notwithstanding. I'd call on him whenever you feel like you need support that you're not getting, or need help and aid with the projects of your heart's desire. He threw his lot in with Jesus long before he really understood Who Jesus really was and what Jesus was really going to be asking of him.
Posted by Sister Mary Martha at 9:10 AM

I love your blog! What do you know about St.Matthias and is he the patron saint of anything?

St James' association with horses is more than that.

According to legend, during the reconquest of Spain from the Moors (Muslims), St James (Santiago, or San Diego, in Spanish) appeared in the midst of battle, on horse, trampling the Moors underfoot, leading the Christians to victory. There used to be an equestrian statue of St James in Compostello, Spain (where his relics repose in the Cathedral), but it has been removed for PC reasons, as it depicts a black Moor under the horse's hooves.