You Scream, I Scream 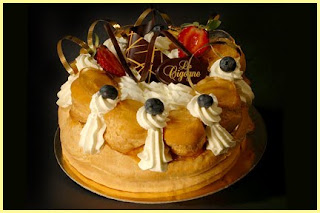 Hi Sister,
Is there a patron saint of ice cream? (Or people who love ice cream, or people who make ice cream, or cooks and bakers in general?) Thank you
Funny you should ask. Just the other day I had a hot fudge sundae for dinner. I figured that since we are celebrated the Resurrection of Jesus I could splurge a little and the thing had so many calories, that should be all she wrote, eating wise.
And yesterday I had a milk shake in the afternoon. One of those delicious fountain kinds, with real ice cream, not that gloop that causes your eyes to pop out of your head when you try to suck it through a straw like at McDonald's. I can't believe anyone likes those! Why not just buy a big cup of wet grout?
It looks like you and I may be in the same patron saint boat when it comes to a love of ice cream, although it is a rare treat for me, since I value my heart and my ability to climb stairs.
But there isn't actually a patron saint of ice cream per se. Once again, we'll have to extrapolate. I do think you'll be pleased with the result.
Off the bat, we have a couple of great saints as patron saints of cooks: St. Martha and St. Lawrence. You'll see that St. Lawrence also had a hilarious sense of humor, if you love high irony.

Next, we have the patron saint of bakers and sweets, who has a scrumptious thigh expanding cake named for him, the French St. Honore, also known as Honorius. He has a couple of baker stories to back that up.
First, when he was named a bishop and the word got back to his hometown, the woman who had been his nursemaid said, "I don't believe it! In fact, I won't believe it until this peel I'm using in my recipe here takes root and grows a whole tree." Of course, that happened. It turned out to be a raspberry tree, in fact. Talk about high irony.
Then, in the 13th century a baker put up some money to build a chapel in St. Honore's name and it became a very rich chapel. In the 15th century, the french bakers launched their guild in that chapel. 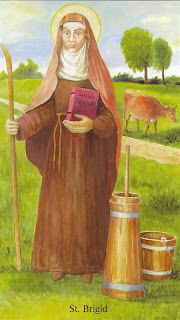 Then we'll add in the diary products to the sugar with St. Brigid of Ireland, who is the patron saint of all things lactose, including the intolerant because of a couple of milk related miraculous. One was when a beggar asked her for a drink of water and the water she poured for him turned to milk. Hope he wasn't lactose intolerant, or it wouldn't have been such a hot miracle for him. He must not have been. Miracles are never bad things and the milk would have provided the poor man more nutrition. 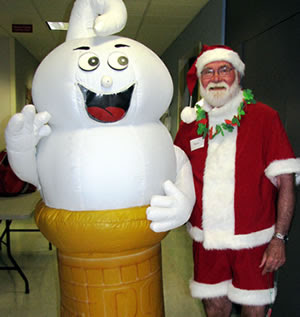 And finally, we'll have to keep our sweet cream nice and cold and throw in St. Nicholas, better known as Santa Claus. He never lived anywhere near the North Pole until the 19th century, but since that's his last known address, we'll go with him for cold confections. He likes children, too, and as we all know, children (and old ladies) love their candy.

Sister, I really have to protest. As any Dutch child knows, St. Nicholas lives in Spain, whence he will take us if we have been naughty.

(This is considered a bad thing. I'm not sure why.)

I get several (rhyming) letters from him every year, and they're all post-marked Madrid. I know they must be from a saint because they all have different handwriting. Must be a miracle.

Hi Sister. Do you know who is the patron saint shown holding a giant saw, I think the long kind used by two people on each end for sawing down trees? I saw it in a painting.