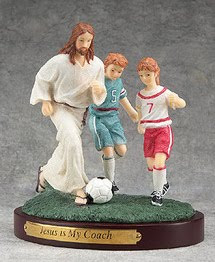 The Lourdes Water debate does not abate:
Thanks Sister, but I am a bit confused about the shop owner of a church shop being there to make a living. I was referring to the little shop in our church entrance that is manned by a volunteering member of the Parish that sells rosaries, little statues, books, etc. I think the money goes to the church itself, if I'm not mistaken. Ok, I'm sure Priests don't mind being asked to bless each object separately but our (now ex-) Parish Priest seemed to be run off his feet and a bit stressed with all the Parish duties and his extra-curricular activities (hymn writing/concerts/cds, etc.).
When I was a little girl my father ran a little corner grocery store that had been in the family for 75 years. Everyone seemed to think we got our groceries for free. Did they think the canned goods and heads of lettuce were brought to the store for free and then we sold some of it and paid the people who brought it something on what we sold?
As a result, I have grown up understanding that most people don't understand anything much at all about retail sales. Perhaps 'retail sales' should be added to the course curriculum in grade school, along with reading, writing, arithmetic, music, a little finger painting. The four "R's". Reading, 'Riting, 'Rithmetic, Retail Sales. 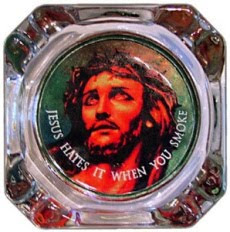 Here's what's actually happening with the little shop in your church entrance. Someone there at the parish, probably overworked Father, sits down with a catalog and chooses the items that will be sold in the shop, orders them and pays for them. The price he's paying, we hope, is "wholesale", sometimes as much as half of what you will later pay for it in the shop.
When the items arrive, someone, probably that volunteer, puts them out in the shop. Someone also has to figure out what to charge for each item. I assure you that there is a "mark up" from the wholesale price. This is what is called the "retail" price. Since every single item in the shop won't get sold, the mark up on all the items is affected. The mark up has to pay for the goods and turn a small profit.
The point of having a gift shop in the church entrance is to try to pull in a little extra money for the church. And the whole reason there is a "volunteer" working in there is because if Father had to hire someone to do that job there wouldn't be any money left over for the church.
I can also assure you that Father is indeed "run off his feet", but he doesn't mind. That's his job. If he does mind, he'll offer it up and confess his shortcomings. He is, after all, God's servant, and those blessings on those rosaries comes from God, not Father by himself.
I hope his CD sales are a help to the parish. 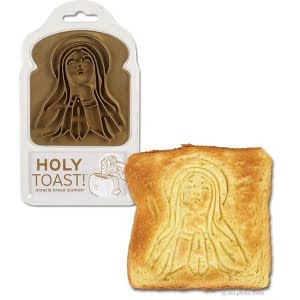 Isn't it a bit odd to have a tiny dot of Lourdes water in a card or rosary? Surely the whole point of Lourdes water is to use it to sprinkle on the sick. My husband used to have jerry cans of the blessed stuff (refilled with Walsingham water when the Lourdes water ran out) and I have a drinks bottle of Lourdes water in my kitchen cupboard for emergency use, brought for me by a friend who went.
We did have a plastic Virgin Mary bottle too (with crown screw cap). I must admit there are some Catholic things that make me cringe , and that was one of them. Since he died I sort of "lost" it. Respectfully of course.
Actually, the whole point of Lourdes water isn't to sprinkle it on the sick. I can understand why you might think that. Surely, that's why someone would want a bottle shaped like Mary with a screw off crown, to have enough water to sprinkle.
But the water itself...it's all about belief. Faith. Don't you remember that lady who was healed because she was crawling around on the ground behind Jesus and He said, "Hey! What are you doing back there?", and she said, "I thought if I could just touch the hem of your garment, I might be healed."
So to just have a little of the water, a drop of the power of faith and the promise of Mary, works for me. 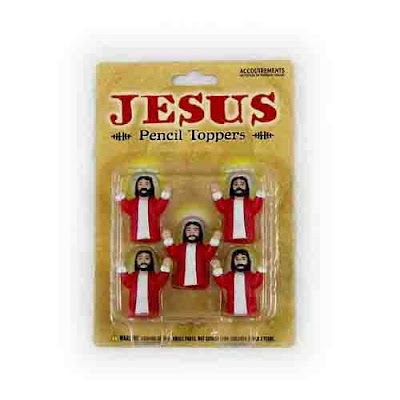 As for Catholic things that make me cringe, I hear you. But, we mustn't judge. I always cringed at the idea of the glow in the dark rosary, but many people find them invaluable on the bedstand during long worried nights.
I'm not sure where you draw the line. Is the Mary toast impression maker over the top? The Jesus ashtray? Someone once gave me a pen with water in it and somehow, when you turned the pen Jesus was walking on water and then in the boat again or some such thing.
I also am uncomfortable with those "Jesus: Dead or Alive" holy cards, where, when you wiggle it, Jesus on the cross has His eyes open, closed, open closed. But...we mustn't judge.
I have to content myself with the idea that a Jesus pencil topper is not such a bad idea, as long as He isn't an eraser getting rubbed away on bad spelling and poor addition. Maybe for some people, Jesus with His hands up on the pencil will remind that that He is always with them.
I have also had a problem with Jesus the sports fan. Not that it's such a terrible idea that Jesus is out playing soccer and football with the kids. It's just that, as depicted, while Jesus is helping a child kick in that goal (how sweet!), if you really thing about it, Jesus is beating that other kid. That's not right.
But I mustn't judge.
Posted by Sister Mary Martha at 10:23 AM

My boys LOVE Holy toast! I must admit I had my reservations as well. But more then the toast, they seem to have a genuine love of the blessed mother (taking a statue of her into the basement when they are nervous to be in the dark etc) which is WHY they love the holy toast....or at least that's what I'm going to go with!

Forgive me for dragging this on, sorry if I've missed something in the answers already, please feel free to tell me to pay attention and shut up about it. If the profit is for the church/Parish and not some arbitrary person, what difference does it make if the blessings are done before or after the sale?
p.s. Father did seem to mind a bit as we had a bulletin about him not being a doormat a few weeks before he "resigned" as Parish Priest. And no, it wasn't silly questions or anything else from me that drove him to it, I aim all my bothering questions at you I'm afraid.

Thank you sister! You're right - all that matters is that whatever we have reminds you of God's love and keeps us close to him.

Hi Sister Mary Martha, from across the Pond.
I once stayed with friends in an old, dark, creaky house in the depths of the English countryside - owls, spooky noises the lot.
I awoke in the middle of the night to see a strange green glow in the corner of the room. Now, good Catholic girl that I am, I shouldn't have been afraid, but I was, and it was only with much fear & trembling & many invocations of every saint that I could think of that I approached.....yes, it was a glow in the dark Rosary :)
Thanks so much for your blog, it cheers my day.
With good wishes & prayers.

I won a glow in the dark rosary for answering a question correctly at Midnight Catechism. (I was a bit shocked that no one else in the audience seemed to know the answer!)

HELP!! There is a woman that I work with that says she is a Witch. Recently she has started to tell me that she is putting spells on me so that I will fall in love with her. What do I do??
Thank you so much for your blog. You always make me smile!

Dear Anonymous,
p.s.
Please say a chaplet of Divine Mercy and if possible give up something for your friend. She has no clue what she is doing or who she is worshiping. I will say one for her too.
Love Paullie

I was given a wall sized card on which the crucified Jesus opened or closed his eyes, depending on the viewing angle.

One of my children saw it and started mumbling "Jesus on the cross, Jesus off the cross..."

I'm glad that no one else seems to have the imagination my daughter has.