How about a little palette cleanser after yesterday's donnybrook? Our readers have weighed in heavily on their grade school experiences. Let's just say, "That which does not kill you, makes you stronger."


Or not.  I think that only works if you are a relatively strong person in the first place. I remember hearing an African American professor bemoan the bemoaning of the welfare state and the state of America's poor. What he said has always stayed with me. I can't quote him, but his point was that our "anyone can grow up to be president in the US if they just work hard enough" mantra is a fallacy that asks every single person to be extraordinary. Oh, sure, we hear about people who were able to rise from horrible backgrounds and extreme poverty. But no one seems to take into account that these people were exceptional, extraordinary people.


Of course, as Catholics, we constantly ask ourselves to be extraordinary, to strive for sainthood. Heroic virtue is our goal. And, of course, the last people to claim any heroism or extraordinary virtue are the saints themselves because to do so would lack the necessary humility. 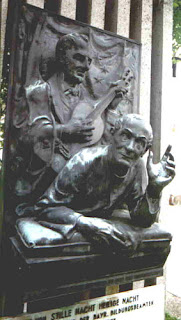 But I digress...a palatte cleanser.


But it turns out that it was not written as a lullaby and in fact was a peppy tune, a lilting dance type number. I can't imagine it, can you? It was originally written in 6/8 time, if that's any help. It doesn't help me any, even though I know what that is,  this 6/8 time, and how that rhythm works.


I don't know who had the wherewith all to make the slight changes that turned the song into a lullaby, but my Santa hat is off to them! 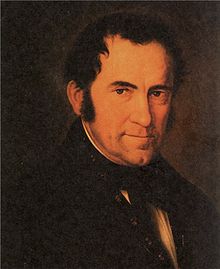 The beautiful lyrics were written in 1816 by Father Jospeh Mohr, an Austrian priest. He had written this poem and apparently let it sit in a drawer or something for two years. Then one foggy Christmas Eve in 1818, he needed a song for the Christmas Mass and took the poem to his friend, the schoolmaster Franz Xaver Gruber (that's his picture on the right).  Father Mohr asked Guber to write the a tune and a guitar arrangement.  Isn't that a kick in the head? What was that? A song for the original guitar Mass? It seems so, since the original music was happy, clappy stuff. To soften the blow of that thought, people have suggested that he did it because the organ had broken down, but there is no proof that this was the case. 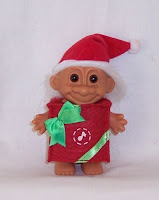 Christmas is happy to have had Father Mohr, especially considering that he had to actually get permission from the Pope himself to become a priest. Mohr was the illegitimate son of a woman who had taken up with a soldier, a soldier who promptly abandoned her and their upcoming child.


In the midst of WWI, the world stopped warring on Christmas Eve during the Christmas Truce of 1914.  Soldiers on both sides of the front sang "Silent Night".  It was the one song for which they all knew the lyrics.


Then they went back to killing each other.  They should have listened to what they were singing a little more closely.
Posted by Sister Mary Martha at 1:41 PM

I am trying to get my head around "Silent Night" in 6/8 time!

It would seem that we have been working with altered punctuation all this time!

I never thought about this being the original guitar mass either. Wow. Look what happens when you set a precedent.

Well, you got me with the word "clappy". I thought there was going to be some mention of venereal disease.

An African American professor, you say? Funny how in today's society, white people still have to point out someone's color when it is other than white. Whenever I mention my doctor (a female) without specifying that she is a female, almost invariably the other person assumes the doctor is a man. Not too long ago, we interviewed for a receptionist at my business. A young man applied. There were so many raised eyebrows and gay jokes made about it (some while he was still in the building!) that I felt compelled to say something. If we feel we need to point something out (African American, female, grossly overweight, guy in a wheelchair) then we are usually stating, quite unconsciously, that it doesn't quite make sense to us or strikes us as out of the ordinary.

The movie Joyeux Noel is about the incident at Bella Wood that you mentioned and is about the saddest movie I've ever seen.

Brad, it's not just white people who point out race, gender or capability. Apparently graduate psychocology students need to point out unnecessary specifics too.

Sister,
I love reading your blog; it always makes me smile! Could please explain the name "Synaxis of the Theotokos"?

I'm probably being musically dense here, but surely Silent Night IS in 6/8 time? It certainly fits the "one two three, one two three" rhythm. But I'm certainly no musician.
Hazel

I find the Bible terribly confusing at times. From the reading on Tuesday:
"For, if you confess with your mouth that Jesus is Lord and believe in your heart that God raised him from the dead, you will be saved."
From the gospel today (Thursday):
"Not everyone who says to me, 'Lord, Lord,' will enter the kingdom of heaven, but only the one who does the will of my Father in heaven."
Well, the second seems a lot clearer and to almost contradict the first to me. I've always thought it was a bit odd that you just have to believe that Jesus is Lord (and do nothing else) to be saved. I'm sure this can be explained as that if you truly believe then you'll change your life to do God's will but why not say that then as this reading could be misleading. Just want to know what you, Sister, and any of your readers think on this point.

Yes, the movie Joyeux Noel is both touching and sad. The spontaneous WWI truce of 1914 included over 1110,000 soldiers and officers (though the commanding generals, who were 20 miles away and safely out of range of long range artillery) objected and threatened everyone involved (though no one was ever charged, I believe because the commanders did not want an official record of such a mass mutiny). In one section of the front the truce lasted until Easter! A very interesting book about this mircle moment in history is Brown and Seaton's CRISTMAS TRUCE; I did a young adult book on the subject entitled TRUCE: The Day the Soldiers Stopped Fighting. In both titles you can hear the voices of the soldiers on both sides who braved severe discipline to have a day of peace and good will. Happiness to all. Jim Murph

We all should re-read and re-read your last sentence, and then listen more closely ourselves.

Bless you Sister, I enjoy your wit and wisdom.

Actually, you're correct. It is written in 6/8 time.

I think when I was trying to imagine it 'happy clappy' I was double-timing it in my head.