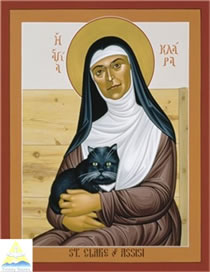 Hi, Sister! My friend is about to get confirmed and needs a saint. There's a picture of Clare of Assisi in our church, and in the picture she is holding a cat. My friend was interested because she loves cats, but I have no idea why there was a cat in that picture. Do you? (My friend also loves American literature, in case there's a saint for that...) Thank you!


But I digress. St. Clare's cat and his busy job falls under the category of the miracles of St. Clare. Jars of olive oil miraculously filled as she passed by. The sick were healed by her prayers. When she was too sick to leave her bed, the Mass being celebrated miles away appeared on her sick room wall. She could even name everyone who was in attendance. (Hence her patronage of television.  Long before anyone thought of "Mass for Shut-ins".  It's a sin, by the way, to "attend" Mass for Shut-ins if you're not shut in.)


And she had a cat.  This cat would bring her whatever she needed when she was so ill she couldn't get up. Isn't that nice?  Because, you know, cats really don't behave that way.

For a saint for American literature, I think we're going to have to extrapolate a bit and say that, as we look to American literature for that which is uniquely American, we should look for a saint who is uniquely American. I would proffer St. Elizabeth Seton, the very first American Saint. We have other saints who lived in America and are considered to be American saints (the North American Martys, Mother Frances Cabrini), but they were born in other countries. Elizabeth, born in New York in 1774,  was the first person from America to be canonized. She founded St. Joseph's Academy which became St. Joseph's College. I would imagine her students also read American literature. She is the patron saint of Catholic schools.
Posted by Sister Mary Martha at 10:22 AM

There is a book "Making Rounds With Oscar" by David Dosa MD. Oscar had an extraordinary gift. It was noticed by the staff of Steere House Nursing and Rehabilitation in Rhode Island. He was a normal cat, but when a persons time had come he would go to their room and curl up with them till their time had passed.

His presence let the care givers and family know when it was time to say good bye.

what is gold could you tell me? a yong boy with my poor english

Sister, Your education is showing! I love that you used the word "extrapolate..." Anyway, for a holy person, why not use Rose Hawthorne? With Nathaniel Hawthorne being her dad, I think she may have liked American Literature. She is presently called Servant of God.

I tell all my Confirmation students about her and other Americans that are waiting in the celestial wings. Here's a link about her holy life. http://www.concordma.com/magazine/autumn05/rosehawthorne.html

Love the story about St. Clare's cat, but the official Patron Saint of Cats and cat lovers is St. Gertrude of Nivelles.

Hello Sister,
Something I read today suggested Jesus didn't try and communicate with Herod when presented to him as he knew that grace would not reach him as he lead such a sinful life. It also suggested that He prayed for and agonized over Judas. As anything is possible with God I don't understand why both of these men could not have had their hearts changed. If it's a case of them having a role to play in the grand scheme of things, it doesn't seem fair that they were not given the opportunity to change while we are. If it's a case of having free will and having to want to change and accept graces is there any point in praying for people who have no intention of changing to change? Sorry, I find it all very confusing.

Sister, you said it's a sin to attend "Mass for Shut-ins" if you're not shut it. I assume you're referring to a situation where someone (who isn't a shut-in) would "attend" the televised Mass as a means of satisfying their Sunday obligation. Correct?

I'm glad Sr. Meribeth brought up the Servant of God, Sister Rose Hawthorne, daughter of Nathaniel Hawthorne, and foundress of the Hawthorne Dominicans.

The Hawthorne Dominicans do awesome work caring for terminal cancer patients who have no medical insurance and can't afford care. The care is given free and patients don't have to be Catholic. The home I have visited is beautiful and the sisters all so cheerful in their work that it's not at all depressing to be among the dying. I'm always glad to donate to their order for the work they do.

But Sr. Meribeth's link wouldn't work for me, seems to be a dead link, so I hope she sees this. There must be other sites that discuss Rose Hawthorne, though.

@Kathryn...just google "Rose Hawthorne" and it'll come up right away.

By the by...I gave talks this year 35 of them) at the "Women and Spirit: Catholic Sisters in America" exhibit in Cleveland. Rose was one of the founding Sisters who changed the American social and spiritual landscape. If any of you wish to find out how the American Sisters contributed to America, look for this exhibit in a city near you. http://www.womenandspirit.org

Did you know:
-that the first infant incubator was invented by a Sister?
-Mayo Clinic was instituted by Mother Alfred Moes.
-First Health Insurance was a product of a group of Sisters.
-Sister Ignatia (Akron OH) was instrumental in getting alcoholism diagnosed as a disease. She worked closely with Bill W. and Dr Bob Smith of Alcoholics Anonymous.

Why does Clare of Assisi resemble Ann Brancroft?

It is a sin to watch "Mass for Shut-Ins" if you are planning to attempt to count it as your Sunday obligation and you are not shut in. It's not a sin if you'd like to use it to oh, say, catch the readings before you physically attend the regular Mass, or on the weekday if you happen to have time to sit down and watch it on EWTN.

Thank you, Sister! My friend loved your post and decided to go with Elizabeth Seton.

American Catholic Literature.... hmm, how do we tie Flannery O'Connor into all of this?