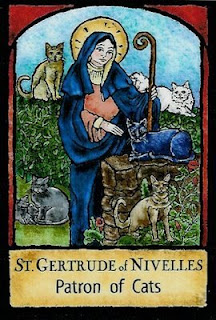 Love the story about St. Clare's cat, but the official Patron Saint of Cats and cat lovers is St. Gertrude of Nivelles.

We know.
Posted by Sister Mary Martha at 4:58 PM

Hi Sister - an annulment question for you. I was talking to someone in class the other night and they told me that in order for her to marry her husband in the Catholic church (Backstory: They are already civilly married, and have a child together. They obviously have bigger fish to fry in confession) not only does she (a Catholic) have to get an annulment (which has already been approved) but HE does as well. Here's the question - he's not a Catholic (and his annulment is 'pending'). Why would the church care of a non-Catholic gets annulled from the first marriage or not? Thanks in advance!

Who is a good saint for when you feel spiritually dead? i.e. - I feel like I'm praying to a brick wall. I go to Mass out of habit/duty. I am near to weeping out of frustration in not knowing how to "fix" this.
Not sure who the saint of the day is, but my answer is their two feet that follow Jesus.

Kathryn, I bet Sister Mary Martha suggests Mother Teresa. She felt that way often. Can you even imagine?

My question is, why do we cover the statues this last week before Easter? (It used to be two weeks and I remember the ushers going along with long poles and removing them.) I should have had sense enough when a child asked me Monday to look it up before another one asked on Tuesday.

Katney: in our town, all through Lent the Statues were covered in black cloth and no curtains were hung in Church (flowers were set in the altar, though) to remember us we were in a time of introspection and sort of a state of mourning, as our teacher used to tell us.

Sister, who do you suggest as a Patron Saint for a person with kidney troubles?

I once read that St Agatha is also a patron of cats. The article said that she would appear as an angry cat to anyone working on her feast day!