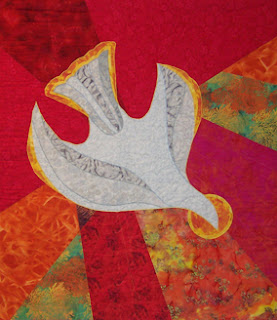 I have a saint-matching request.

I recently moved to the Dutch speaking part of Belgium but I don't speak any Dutch! Learning foreign languages doesn't come easily to me.
Can you recommend a saint for me for either language learning in general and/or Dutch in particular?

Many thanks for any help!


Oh, you poor thing!  I suppose some people have a penchant for languages. I am not one of them.  I speak English and few badly pronounced words of French. Numbers one through ten in Spanish. Miro!  Look!


As a result, I am forever baffled by people who are hard on immigrants in the States for not learning English.  To me, that is like being aggravated with someone for not knowing how to fix a car.  It would be nice to know, but it's just not that easy.


There have already been a couple of very good suggestions in the comments section, but I'm going to go with: 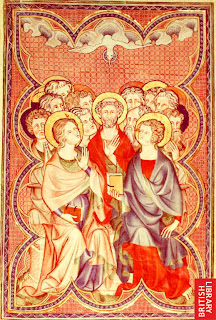 
And here we are just after Pentecost! You do remember Pentecost?  The disciples got together in a room and the Holy Spirit descended on them and voila! (French for "There!"), they could speak and be heard in any language. I'm sure Dutch would have been in there if there was a Dutch language at that time.

Wouldn't that be great?  The Holy Spirit descends on you and you can speak Dutch?  How 'bout it? Since it sounds like you need as much help as I would, I decided to go with all twelve, although you could conceivably focus on someone like St. Thomas, who maybe was the only apostle to leave the Roman Empire.  He went to India (maybe) and would have had to use his new gifts.


The patron saint of Belgium is St. Alena. Such a pretty name!  She was the daughter of a chieftain and her night time disappearing act worried her father.  He had her followed. She was going to a chapel.  He decided she had been bewitched by the Christians and had her dragged home.  A fight ensued where her arm was cut or torn off.  An angel swooped in and grabbed the arm and flew it over to the chapel, placing it on the altar. Having seen an angel fly in and fly off with the arm, caused Alena's parents to reconsider their attitude toward Christians and they both converted. Being a saint, Alena didn't seem to care about her missing arm.  Although, technically it wasn't missing. Everyone knew right where it was.  Here she is in Heaven with her arm back. I think.

I learn something new every time I read your blog, Sister! When I saw the word "miro" I thought that it was interesting that you knew a Japanese word. Then I realized that it must be Spanish, so I looked it up. Lo, and behold, it means almost the same thing in both languages. "Miro" in Japanese is a forceful way to say "look," though it is very masculine, so I wouldn't use it myself.

See, you knew one more language than you thought! :o)

I totally agree with you about Americans being hard on foreigners for not learning English. It just isn't that easy - especially after the age of ten or so!

I'm a language person myself.
Actually, Miro means "I look" while mira means He/She looks. Mira also would be the way to say "Look!".

Thanks so much, Sister, for taking my question and for the great suggestions; I appreciate it!(Thanks also to the others in the combox for their input).

I had also googled around and found St. John Berchmans. Although he's the patron saint of altar servers, he *was* a native-born Fleming, so I figure it can't hurt to ask him too!

Sister,
Could you please tell me you is the patron saint of broken homes in need of repair?

Wow! I had never heard of St. Alena. I wonder if that is a variation of Aline - or vice versa? (It's pronounced ah-LYNN for those who don't know). I have an aunt Aline, and she was born with one arm... Now I wonder if her mother named her after that saint!?