re: unions - I expect she would be shocked and appalled at the los angeles teachers unions who have not stood up and spoken against those teachers molesting those students FOR YEARS, or objected to their receiving pensions and health care for life because they happened to file their 'quitting' papers before the 'your fired' papers get submitted. Makes you question unions, it does. 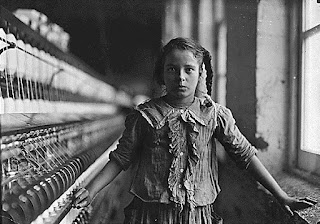 Actually, it doesn't.  Especially in the light of our own scandal in the Catholic Church which will take a century to overcome.  We will live in this glass house throughout our lifetimes and beyond.  Shall we get rid of unions and the Catholic Church?  Your logic applies to both.

How best to help the poor on a large scale, that was the question facing Dorothy Day.  As Jesus noted, "The poor will always be with us."  Apparently, even He needed a break from the crushing burden of the endless stream of destitution.

He did spend most of His time, however, telling us that we should go ahead and help them, because as we care for them, God cares for us.  Hence that "lilies" speech.  And those Beatitudes.  And all that compassion.

I wouldn't worry too much about anyone getting a union pension.  The guilty party won't be receiving it in prison.

And frankly, as I mentioned yesterday, here is where we all have such a hard time with Jesus and His radical thinking.  We still must have compassion for the perpetrator.  Too hard, right?  Too bad.  Jesus did not turn to the thief on the cross and say, "Well, you deserve this."  We must always have hope that the sinner will return to the table.  "Let he who is without sin cast the first stone."  He didn't add, "Unless the sin is really, really bad, then have at her." 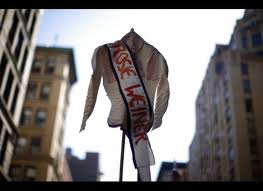 I'm a member of a Union and it has helped me and many like me be treated with respect by our Employers (it must be said that my managers have all been fabulous, but Corporate Policy is often quite abusive of employees in my business). That said, some Unions have too much power, or use their power for very selfish ends. It doesn't make them all terrible, just like my former corporate overlords being awful doesn't make all corporations awful. I'm not sure why we make politics such a team sport in the US - it's always Us vs. Them, Good vs. Evil. Like Dorothy Day or St. Augustine (grant me chastity, but not yet) it's such a contiuum of shades of grey.

My point, exactly.  Sometimes the balance swings too far in one direction or the other, in just about everything, from what we eat to who we vilify.  Jesus' radical ideas of love and compassion for all, sinner and saint is a good place to begin the conversation.  That's how Pope Leo XIII did it.
Posted by Sister Mary Martha at 12:50 PM

Just today, talking to someone who complained (in regards to the death of one of our friend's baby girl, who had survived four heart operations and died of pneumonia while in the hospital recovering from the last operation) that she should have died and that God was unjust because He lets the bad people live instead, I was reminded (and told her about) the verse that says that He "doesn't want the death of the sinner, but that he repent and live" but for the life of me couldn't remember book or verse!

Is there a patron saint for this young couple who have lost three babies to this heart condition and have now have been adviced against further pregnancies? It seems the combination of their genes results in their children suffering from the same congenital heart defect

CT, my prayers would (and have!) gone to St. Gerard Majella. My grandmother was on death's door during the influenza epidemic in 1919 while pregnant with my mother. My grandfather was told to make preparations for the funeral(s)..(her child's as well). Instead, a relic from St. Gerard was brought in and placed on her stomach and the family prayed all night long. The next day, the doctor's were all amazed at the speed of my grandmother's recovery and my mother was born a few weeks later.

Some years later, my mother had undergone several miscarriages after having 3 children. She prayed to St. Gerard (after all, he had worked hard for her mother)and as a result, I am here to suggest your to your friend this most effective intercessor.

I will join my prayers with yours and theirs that God will grant them the children they obviously ache for.

Well, if only unions would let their teachers marry and would allow women teachers, they wouldn't have this problem.

I can accept what you say intellectually, but I still have the visceral reaction to hideous crimes, and while I understand that the teacher's unions look out after the teachers, it seems there ought to be a line drawn where the students' safety is concerned. I do lose respect for those in positions of power who do not step in and protect the innocent, whether in the Church or out, and while I would not advocate disbanding either the teacher's union or the church, the need for reform is clear.

Thanks for addressing this.

One of the greatest challenges of being Catholic is exactly this, Sister. It is impossible for me to hide from the fact that Jesus really meant it when He said "Love your enemies." Getting my arms around social justice teaching was the most difficult thing for me and took a real act of will (especially with regards to the death penalty) and I'm far from finished, but it is an unexpected joy to being to have at least the first glimmerings of what love really means. Great post. Great.

@Anonymous - "Well, if only unions would let their teachers marry and would allow women teachers, they wouldn't have this problem."
HA! That's exactly what is going on (and has for some time) in the Episcopal church. And is it helping???
And FWIW, there are more married, straight pedophiles than there are celibate or homosexual pedophiles. There are 3x as many firefighters who are pedophiles, most of them married with children! Their victims are often in the same range as their own children. These are mentally ill individuals who need our prayers and sacrifices - and by all means, the Church needs to do a MUCH better job of screening those who are accepted into the seminary/ordained. Seminaries need to do a MUCH better job of preparing these men spiritually for their task.

What should I say to people who accuse me of believing in a "Pixie in the sky" and fairy tales because I believe in God and ask me for proof that He exists? (Or do I just ignore them?) I feel like I should say something, but it's quite hard to say anything that will convince someone who starts out with these views, as they usually get ruder with each attempted defence and I don't have your gift of making sense of everything.

Dear Sister,there is a friend of mine who keeps on arguing with me that we Catholics do not celebrate Passover especially during the designated time of the year like when the Jews used to.Please help me

Sister, I think a lot of the problem lies in the semantics of the term, "radical." When many people, especially Americans, hear "radical," they think "Radical" with a capital-R. As in, "Radical, Revolutionary, Republican"--along the lines of the Enlightenment, the French Revolution, the Marxists and the Postmodernists. I know this was not the sense that YOU meant, but some people are too quick to misappropriate the small-r "radical" that can rightly be applied to Christ's teachings for what is in actuality a devastatingly anti-Christian agenda. Our Lord did not preach violent revolution and regicide (tyrannicide is one thing, but Louis XVI, for example, was about the furthest thing from a tyrant).

All that said, I wholeheartedly agree with your defense of the unions and think it is very well qualified and nuanced. Institutional unions have many problems, like all large human institutions, but that does not in itself discredit their utility. One major systematic problem, however, above and beyond corruption or an incidental moral failure, is the refusal of a number of unions to root out the remaining strains of ideological Marxism or to reconsider unflinching support for Marxist-inspired political parties.

(Mind you, radical neoliberal parties are just as bad, but that's beside the point here.)

As such, if I may as a young layman so opine, I think that Dorothy Day's canonization should hinge on the resolution of several key issues, notably:

1. Whether there is adequate believable evidence of repentance for her personal moral failings, and

2. Whether throughout her activism she espoused Marxist thought or else willfully abetted the advancement of Marxists whom she saw as "allies." Ultimately the question is: were her life activities conducted in such a way as to inspire a real and true advancement of the true Catholic Faith?

Can you recommend a patron saint for gay, lesbian, and bisexual people? Your help would be much appreciated.

Please help. Maybe this is the wrong question for a nun, but maybe someone else on here can offer suggestions too. I'm a young single Catholic women called to marriage... where are all the (practicing) Catholic young men at? Oh, I know they still exist albeit few, but where? I have few friends outside of Catholic activities: volunteer work and the young adult group I attend. It seems that everyone there is already paired off, with respect to both relationships and friendship circles. I've been seeking a relationship and friendships for almost 3 years no avail. As far as love and marriage goes, I've been asking intersession from St. Raphael, Mary and Joseph. Thoughts? While my relationship with God has blossomed in this seclusion, I could really use someone to spend Friday nights with.

Sister, can you recommend a saint to help my 9 year old daughter to have some friends at school? Or to help her follow God's will, if He doesn't want her to have a "best friend" right now?