Do It Yourself Blessings

Hello Sister Mary Martha. Thank you for your blog. I have been wondering about something. When my rosary and Miraculous medal were blessed the priest had me go to a water font and "seal the deal" as he said and put the water on myself. Do I need to have them blessed again so it really counts?

You know what is the most asked question about having items blessed? When should I ask Father to do it? Before Mass? After Mass? Make an appointment? At the Ladies of Charity Card Party? Try to time showing up at the rectory after dinner and dessert?

If you do that, bring the coffee.

And the No. 1 answer is (SURVEY SAYS!) "Before Mass".  This is because Father has a couple of minutes there where no one  is pestering him about the gas bill or complaining about the Eucharistic Ministers, or who is holding hands during which part of the Mass or that a Liturgical dancer has fallen and can't get up. The blessing only takes a moment.

After Mass there are probably a lot of people talking to him. And just about any other time, he's busy.

Although, you really can do it any time, because it only takes a moment.

It also doesn't take Holy Water to "seal the deal".  He can just "wave his hand over it" as the separated brethren say and that's enough. But sometimes, when Father blesses an item, he'll sprinkle it with Holy Water.

So it wasn't "a water font", but the Holy Water font. You knew that, right?

The deed is done, water or no.

My question to you is, when did you ask? Father must have been busy for him to send you off to the Holy Water font on your own. It's a little odd.  He may not have had enough sleep.  Or me, standing off to the side looking over my glasses at him with a patented nun stare.

Our next booklet is about holy water! It's not done yet. I'm trying to untangle the Christmas lights and we're dusting off the Nativity statues in the rectory basement. They're looking a little chipped in the paint here and there. We were considering touching them up but we don't want this to happen: 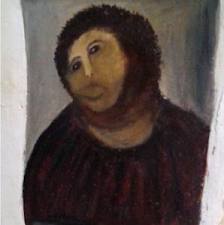 That poor lady. She was trying to do the church a favor, bless her heart. Father shouldn't have left her alone, either.
Posted by Sister Mary Martha at 2:37 PM

I would make an appointment, as Father should be prepping himself with prayer in silence before Mass (which is often overlooked as are the sacred silences in the Mass itself. Also after Mass everyone (including Father) should be offering a thanksgiving. There are suggested prayers for before & after Mass in the Rubrics & Missals. There are also suggested blessings for the blessing of everything under the sun (bibles, rosaries, automobiles, homes, etc.). A retreat master (a priest) I knew would regularly bless items when on retreat right after communion after one of those sacred silences, just before the recessional hymn (where most parishes make their announcements). You might ask your pastor to do the blessing of items periodically through the year at this time.