I'm sorry for posting unrelated comments under this blog, but I couldn't find a more appropriate way to ask you. A group of friends and I decided to draw lots for a patron saint for a year, inspired by St. Faustina's account in her diary of the sisters doing so. St. Bede the Venerable chose me. It seems a bit ironic to be given a Doctor of the Church, patron of historians and English writers, when I've just dropped out of my Masters study in theology half-way through. (I just couldn't seem to make being a stay-at-home-mother to two toddlers and graduate study work.) I had to look him up, since I'd never heard of him before, and found he was made a doctor of the Church (1899) 36 years before he was made a saint in 1935. I didn't discover what the miracles were that proved his sainthood. Do you have any idea? I'm hoping he has something to do with getting insomniac children to sleep, or quelling sibling disputes, or suchlike!

This is the perfect place to place your question. There really isn't another place. Ask away! We do have the title "ASK Sister Mary Martha" after all.

I don't think it's ironic at all.  St. Bede obviously wants to prod you back in there. Just because you quit doesn't mean you can't finish. Maybe you're just taking a break.

Quite some time ago I happened to watch an episode of "Oprah" in which she had a man who didn't have an ounce of fat on him tell about how he lost hundreds of pounds. I think it was hundreds. Plural. He had been ginormus.  I know that's not a word, but it will be one of these days (we just have to settle on the spelling). It turned out this portion of the show was a flash back. After he had become the poster child for healthy weight lose and keeping the pounds off by exercise and eating sensibly for several years, he went out to celebrate his birthday by visiting Coney Island. There, he treated himself to a Coney Island dog.

He fell off the sensible eating and exercise to keep weight off bandwagon, poor thing. He had a dozen hot dogs and just kept going and going. He was huge again.

It made me so sad.  I get falling off the wagon. I don't get laying in the mud and never standing up again after the wagon takes off without you. Stand up, wash your clothes and get on the next wagon. So you've gained 12 pounds! You don't have to gain 60.

Your children won't always be toddlers and St. Bede is the perfect saint for you. We don't know what his miracles were. I suspect he was grandfathered in without miracles, as he was a Doctor of the Church. There was one miracle associated with him, but it wasn't a "pray for his intercession to prove he's in Heaven" miracle required for sainthood in more modern times. A historian was trying to describe Bede and had written "Bede...the..."  "uh" ,  "Bede...what a great...hmmm"..." "Bede, the very interesting, worthy of our...no, that's too long...."  Angels came and wrote in "the venerable", which stuck. 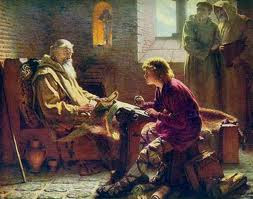 On his death bed, on the day of his death, he was still dictating his last book. He was translating the Gospel of John into English to an assistant. When he finished, he asked the young man to help him into a position of prayer, and there he passed away peacefully. It seems to me, from what happened in his last days (shortness of breath and swelling feet) that he went from congestive heart failure.

How can you think that St. Bede isn't quite right for you? We have every sympathy with you not being able to muscle through toddlers and masters. Every child should have three parents. If it worked that way, parents wouldn't be so exhausted. But it doesn't.

Toddlerhood will pass. But the books and information you need to complete your masters are not going anywhere. That wagon will always be there, waiting for you to hop back on. St. Bede the Venerable will be there to help you aboard.
Posted by Sister Mary Martha at 2:02 PM

Hang in there. For some time in our family we had eight students--from youngest son in grade school to older siblings in college to Mom in teacher training and Dad in a Masters program. Add to that jobs, sports, scouts, religious ed.... You will return in due time.

Sister Mary Martha, I love you!

Your booklets are a blessing of enlightenment and humor, exactly what I need these days. Thank you.

Sister, in light of the senseless killing of innocent little ones in CT...perhaps you might write a little about the Holy Innocents?

Dearest Sister, you do the work of the angels! But could I beg you, in the name of all English teachers living and dead, to say "lying" in the mud, not "laying." I lie down, I lay down last night, I was lying down before that.
Jill

As for my question..

I grew up with an amazing boy whom I dated when I was 14. We continued dating until college separated us.

lately I've been talking to him again and we are becoming very close again. Unfortunately he's made some (as he called them) mistakes in his first year of school. Sadly he fell into the trap of partying hard, sleeping around, and slacking off.

I asked him to go to confession, but he says he would like to, but he can't if he feels forced, or unless it's on his terms and he feels ready. He doesn't feel ready now.

Ok, I have two questions.

1. Is it wrong for me to be so persistent? I'm always bugging him about it, getting upset when he says no, and I've practically dragged him to church. I'm afraid it's selfish of me to want him to come back to God to make me feel better. If that makes sense... I don't want to fall into pride.

And secondly, is it true that you should not go to confession unless you feel truly ready and feel 'right'?