Dear Sister, I love your blog. I really really really do. You cover tough topics with humor and grace and for that, God bless you. As for my question.. I grew up with an amazing boy whom I dated when I was 14. We continued dating until college separated us. lately I've been talking to him again and we are becoming very close again. Unfortunately he's made some (as he called them) mistakes in his first year of school. Sadly he fell into the trap of partying hard, sleeping around, and slacking off. I asked him to go to confession, but he says he would like to, but he can't if he feels forced, or unless it's on his terms and he feels ready. He doesn't feel ready now. Ok, I have two questions. 1. Is it wrong for me to be so persistent? I'm always bugging him about it, getting upset when he says no, and I've practically dragged him to church. I'm afraid it's selfish of me to want him to come back to God to make me feel better. If that makes sense..

Amazing is a good enough word for this fellow, I suppose.

Yes, it's wrong of you to be so persistent. Does that surprise you that the old nun would say stop nagging this guy?  Nagging never works. Unless you're St. Monica.  She prayed more than she nagged, I think.

What's the second question? I have one for you. What's so amazing about this guy? 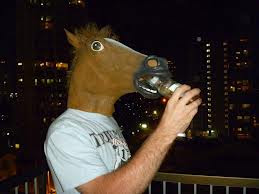 It is amazing that he would do all of that stuff, mortal sins included, and not "feel ready" to go to confession or Mass or anyplace else but on a date with you. Did you ever hear this old chestnut, "You can lead a horse to water, but you can't make him drink"?  Your horse is not thirsty.

If it didn't bother you so much, you could ride off into the sunset with him, two happy pagans, destined for Hell.  But you're on the right track and he isn't. No amount of pleading and cajoling is going to get him past the dragging stage. And if you're dragging him, it means he really doesn't want to be there, is probably thinking of last night's football game while he's there and wondering what kind of sandwich you'll make him when you get home.

How is wanting what's best for someone else selfish? You lost me there.

But then, I'm lost altogether on what makes this fellow so amazing.  Amazing in a good way, at least. Not seeing it.

All is not lost, however! We have ways of dealing with this type of thing. We have the wonderful GREEN SCAPULAR.  This is just the ticket for you two lovebirds.  Get your hands on one of these.  It's purpose is to bring people back to the Church.

May I be so bold as to suggest that you take a breather from Mr. Amazing?  Think of him as a addiction. To break an addiction you have to have 90 days away from the drug. That will stop the chemical reaction your brain is having to being with him, just like it does for cocaine and heroine.  A total break. No communication of any kind. Nophone calls, letters, bathroom wall writings,  emails, talking, letters, tweets or texting. No facebook.  You can tell him you're taking a break for 90 days. Count the days.

Then when you're clear headed you can decide how amazing he actually is. Plant the green scapular on him before you go!
Posted by Sister Mary Martha at 10:22 AM

He doesn't change because he does not want to do that, he likes the way things are right now.

If a girl or a guy does not want to do that he/she is "just not into you."

Give it up and move on.

After several months I have returned to have more fun with you all. Sister Mary, I may know why your compuers became posessed several months back and nearly bit the dust. May be a joke I recently came across will help explain.
"One day, Jesus and the Devil were having a discussion about who was best, so God suggested a typing competition. So God sat them down at two computers, one each, and told them to type up an article written on a piece of paper. The first to complete the typing would win.
Anyway, both Jesus and the Devil were typing away frantically, when there was a power cut and both computers switched off. Their typing work had disappeared from the two screens.
When the power was restored, and the computers re-booted, Jesus's work re-appeared on his screen, but the Devil could get nothing back and had lost all his work. So Jesus was declared the winner. The Devil complained bitterly to God saying that it wasn't fair at all and demanded a rematch, but God said,
"Stop whinging Satan, you know why Jesus got his work back - everyone knows "JESUS SAVES!""
Sister Mary, you are loved. I give my love to my Guardian Angels!

I love this answer, as an old lady looking back at all the horses (or were they mules?) I tried to lead to water in my own youth. Funny and very psychologically astute Sister!

Your answer is spot on, Sister. I was 18 when I got married, and I didn't marry the man -- I married what I wanted him to be. I practically made him up in my own mind. So many girls do that. I hope this girl listens to you -- I hate to see that happen to someone else.