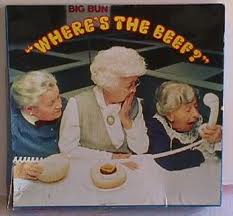 Yesterday we talked about New Year's resolutions. I was thinking about all of that some more and I thought it might be a good idea to have a catch phrase. Catch phrases are so memorable! We still remember "Where's the beef!" That was 30 years ago. Maybe if you're under 30 you don't remember. But all the rest of you do.  If we have a catch phrase for how we want to improve ourselves we'll be able to remind ourselves quickly and efficiently how to behave.

I didn't come up with the catch phrase. I heard it at Mass on Christmas Eve. Old Father Tom has a slow cadence to his speech and I was having a difficult time following what he was getting at until he launched into a little story.

The story was about the traditional Mexican Christmas pageant, the Posada (Spanish for "lodging"), which involves re-enacting the Miraculous Birth of Our Savior.  During this extravaganza with lots of little children acting out all the parts, there are four inns at which Mary and Joseph seek refuge when they arrive in Bethlehem. The first three innkeepers turn the couple away and the fourth lets them into the stable. 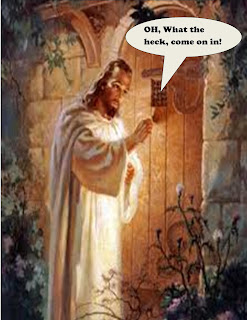 But in this story, during one such dramatization, the actors playing Mary and Joseph must have been particularly great, because after they had been sadly turned away from The Bethlehem Arms and the Holy Land Motel, little innkeeper #3 broke down. When the weary Joseph asked if there was any room at the Inn, Innkeeper #3 blurted out, "Oh, what the heck, come on in!"

Isn't that a great catch phrase? It covers everything! From the Good News of Salvation itself, to charitable works to opening your heart, "Oh, what the heck, come on in!"

We should have T-shirts and coffee mugs made for the gift shop.
Posted by Sister Mary Martha at 7:30 AM

Got a question for you, sister. We just moved to the states from Canada and expected to have Jan. 1st as a Holy Day of Obligation. Well, we were surprised to find out our bishop of Salt Lake City, Utah "abrogated the requirement as a holy day of obliation". We thought that was weird. My sister, who has recently come back into the Catholic Church after many, many years and is struggling with accepting some of the teachings of the church questioned me as to how it could be this way. Where she lives in California, it is a H.D.o.O. but not where I live? She said, "So. If I don't go to Mass it is a mortal sin, but not if you don't go?" I stumbled over that one. It is bothering me. I didn't know the answer for her. I just told her that the Church was divinely instituted but humanly run and humans can make mistakes. (Which is what I think our bishop did - and went to Mass anyways this morning.) But after talking to my husband about this he said, which I think is a good way of putting it: "It is more about obedience than it is about going or not going and mortal sin versus not mortal sin." In other words, I think, our bishops should have the interest of our souls as their top priority and by requiring Jan. 1st as a H.D.o. O. then they are doing us a favor and we should obey the rules as a benefit to us not a punishment . But the bishops that don't require us to go to Mass today aren't necessarily purposefully denying us Mass - they are just making it optional for whatever reason.
My question to you is your feelings on this subject and whether or not I've got a handle on the reasons for this discrepancy.
Thanks.

Sister, that is the sweetest story -- that dear little kid! It's a wonderful idea for a catch phrase. I'm going to try to remember it all year. I often forget to ask Him to come in, especially when I'm having the worst of times. Why is that? I've always wondered what is behind that strange tendency I have to literally forget that He is what I need. It isn't that I don't want Him, believe me. Maybe it's the side-effect of despair. Actually, by not consciously asking Him in to help me, maybe I'm leaving a big hole for the devil to slip right in. I'm thinking all this as I write. Yes, I do need that exact catch phrase this year. Bless you!