The Order of the Eastern No-No

Since things are so quiet around here, I have time to stir up some trouble with this question from a reader:

Here's my question....At what time in history did Catholics decide to condemn Masonry or The Order of the Eastern Star? Are they the same? HELP!


I bought some religious items from an Estate Sale. The estate lot had a membership to the Fresno Chapter of The order of The Eastern Star. The membership holder was a Nun. I have her holy cards, letters she has written with her signature, friends memorial cards( including a few priests) and other devotional items. 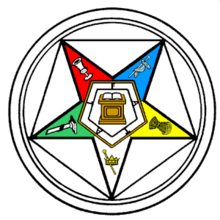 I wasn't really surprised by her membership, however others looked at it has the devil walked into the room! How can a Nun be in the Eastern Star? Can Catholics be a Mason? I'm not armed with such knowledge can you help me?

When did the Church first warn about the Masons?  1738 AD. You can read all about it here.  But if you are allergic to things that are dry as dust, scroll to the bottom, where you'll find what Pope Clement had to say back then.


The last time I discussed the Catholic Church's teachings about the Free Masons, some Free Masons hair went on fire.  Be sure and read the comments section, unless you can't stand the smell of burning hair.  It's like an exploded blow dryer in there.  I'll let you wade through this.  I'll have some coffee while you read.

The Order of the Eastern Star is a women's auxiliary group for the Masons.  When it started way back when, you had to be related to a Mason to be eligible. You had to be a daughter, wife, widow, niece...something familial...to a Mason. The rules have relaxed (no doubt to increase dues revenue) to include women who have some sort of relationship with a Mason.  I'm not sure how close the relationship has to be.  Or how you would prove that relationship.  Maybe you have to show your Facebook page. I don't know what was going on with that nun.  She shouldn't have been in the Order of the Eastern Star, the Church expressly forbids it.  Maybe her poor misguided father was a Mason, and she was somehow 'gifted' with a membership and just stuck the membership certificate in a drawer where it stayed until she died. Let's hope that was the case.

I'm not inclined to behave as though Masons and their families are devils with horns, unless one is willing to judge that such notables as Clara Barton and that lady that wrote "The Little House on the Prairie"  (both members of the Eastern Star) were Satan worshippers.  But the Church has asked us not to be Masons.

So that's that.  If it all makes you smolder, try this.

In my overprotected and naive youth, I had no idea of the hatred shown to Catholics by the Masons.
To this day I remember how shocked I was, to find, when I was first introduced to the grandfather of a current boyfriend, that he regarded me with the deepest loathing and hostility. Grandpa was very involved with the Masons, some sort of head honcho; and he was a lawyer, and apprently it was important to be a Mason if you aspired to the practice of Law. I have yet to meet a decent member of that profession.
Of course, it didn't help that I was also Jewish, to boot - (Jewish mother).
Needless tosay, that particular relationship did not last.....

I'm an Anglo-Catholic (it's like an Episcopalian that wishes we were a Catholic) and I'm also apart of the masonic family. They don't do any devil worshiping, special rituals or... well, anything interesting. Masons are a bunch of old men who get together and get drunk and Eastern Star is basically the same, except with old ladies and more tea.

Being said, if you're going to be Catholic you should do it right and do what the Pope says. From what I can tell, the 18th century issues with the masons have pretty much died down. It's more of an issue of -- just do it cause I say so.

Which isn't a big deal. There's lots of other clubs where old men can get together and drink! :)

(oh and if any masons reply with hair burning again, just ignore them. A lot of masons don't have lives outside of masonry -- my husband included -- so they get overly offended when any comment -- even a correct one-- is said about them) :)

It isn't only the Catholic Church that disapproves of things Masonic: Several of the denominations frown on it, too. Although I know several men who ignore the disapproval and become Masons anyhow.

My grandfather was an Episcopal vicar. He said he conducted a funeral once where the deceased asked for a Masonic rite. Thinking it would be something like a few additional prayers by the lodge brothers, my grandfather allowed it. He said it wound up being much more than that and he felt it crossed some kind of line that separates the sacred from the profane. He vowed he'd never do another Masonic funeral. (Which is different from doing a funeral for a Mason.)

This is why there will never be a(nother) Catholic president.