Oh, these lazy days of summer! Thank you for you're continued patience with my absenteeism.  Sister Julianne is such a whiz with everything that it's done before I think about doing it.  And if I mention something I might want to get done, she runs off and does it.  She is one of those people who loves to fix things for you. Can't find your glasses?  She's already searching for them!  Need to trim the morning glories off the power lines before they crawl up and choke off the power to the whole neighborhood? She found the clippers, the green can, the ladder, the garden gloves....and she's halfway up the ladder while you're still changing shoes. At the end of the week, I go back to school, just to dust and arrange and collate.  I have a feeling that when I get there, she will have arisen in the middle of the night and done it all and I'll just skip through the hallways all day.

So I had some 'leisure time'.  I usually read. Or visit with you.  But I watched a documentary that someone recommended.  For the longest time, while watching it, I was sorry I took it on. 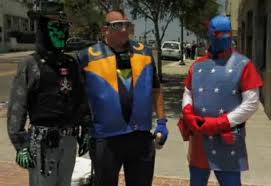 According to this film, there are people who have decided to be Superheroes.  They make up some kind of silly costume and stand out on their own street corner, or a corner somewhere in their town and wait for some crime to come by and then they try to stop it.  They fashion weapons.  They make masks. They practice fighting by sparring with other pretend superheroes.

And, I have to say, the poor things, if we were to call people names, they are the king nerds of nerdery.  They are Nerdtastic.

One fellow had made himself some sort of flash ring. It looked like a "magic ring". It had a little lever or knob on the side and when he flipped it, flame shot out.  Or, it flashed so it looked like flame was shooting out.  "It's a distraction," he said, sounding very important.  I'm not sure what he planned to do with the criminal once he was distracted.  Magic Ring was practically an old man. 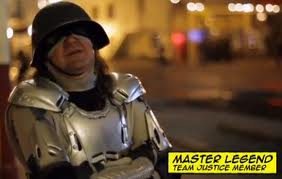 I don't think they really fought much crime.  One fellow kept his secret identity as as superhero from his wife. When he finally told her what he was doing with his evenings, she did not laugh in his face or leave him, like any sane person would.  She became a superhero, too.  That's devotion.

So it was a little sad watching  a group of them stand on street corners at night and skateboard around talking to each other on walkie talkies. A drunk driver side swiped a car and the skateboarder "called it in" to the corner stander.  "Get the license plate!" the skate boarder yelled into the walkie talkie.  "What?  Can you repeat that? What?"  the corner girl answered.  Drunk driver, gone.

They did eventually stop the man, took his keys away and promised to mail them back to him the next day.  Shazam!  Take that, crime! 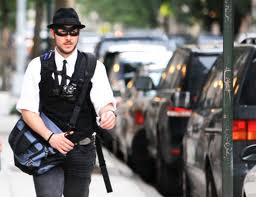 But near the end of the movie, most of these people were shown doing something else. The man and his wife spend their own money to make a homeless person kit.  They take really large size zip lock bags and go to the Rite Aid and buy lip balm and toothpaste and toilet paper--a list of things they think one person would need to live on the street for one day--and they bag it up. A roll of toilet paper, a lip balm, a bottle of water.  Each bag is worth about $20. They make as many as they can muster and pass them out among the homeless.

Many of them carry back packs filled with candy and little toys and nutrition bars and pass them out to people they encounter that need a lift.  They help old drug addicts in wheel chairs get across busy intersections.  They ask people where they stay at night, and arrange places to meet to bring them things they need.  They hold hands and take names.  At Christmas,  they collect enormous amounts of clothing and toys and bring them to homeless shelters.

Today, we call these types nerds. But from the time of Christ on, we have called them saints.  Oddly dressed people with funny ideas about doing what they can to help humanity in need, wherever need exists.  People who really don't care what other people think about their odd mission in life or their funny hat.

They urge everyone to join them, to pick up the slack, but you and I know that very few people have the nerve to be Nerdtastic.


Posted by Sister Mary Martha at 8:00 AM

I'd heard about that, but wasn't too interested because, like you said, it seemed a little sad. I had no idea they actually are superheroes. Thanks for the inspiring post. Hopefully, I can find something nerdy and good to do today, and help someone, and not even care what someone else might think about me.

But a lot of people do things like that -- just without the costume.

I could mention my husband, for example. He has resumed visiting hospice patients. I say resumed because he was kind of on a hiatus while he himself has been undergoing chemo.

You don't have to wear a costume to be a superhero--or a saint.

Ahhh - but there is the anomaly of not letting one's Right hand know what the Left hand is doing.....drawing attention to one's good deeds by Dressing Up somehow diminishes the effect.
In my opinion.

Is St. Catherine of Siena or St. Catherine of Sweden the patroness of preventing miscarriages? and why? I've seen both, and while it's possible they both are, the names make me think someone mixed it up somewhere.

I really loved your post! Its so true! Most of the saints had nothing attractive about them in their outward appearances but have the most beautiful souls.