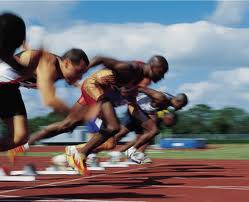 St. Sebastian certainly had endurance.  You are not going to find a depiction of St. Sebastian where he is not shot full of arrows, tied to a tree. The people who did that intended to kill him. He did not die. St. Irene came along and nursed him back to health.  Then St. Sebastian back to those people and said, "Ha! Look here!  You didn't kill me!"  So they clubbed him to death. 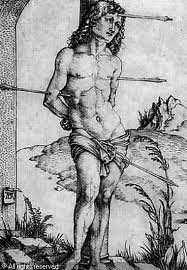 Before all of this St. Sebastian had been a soldier.  Hearing the words of Jesus made him decide not to wage war any more, but Sebastian was still out there with his battalion,  telling them to lay down their arms.  That went over like a lead balloon, which is why, eventually, everyone wanted him to just shut up and they tied him to a tree.

Where he was shot full of arrows and didn't die. I'd call that endurance.

I have a hair brained notion about speed. How about St. Peter?  Bear with me here.  As far as I know, St. Peter didn't run anywhere, unless he was in a hurry, to say, get up some stairs.  But he did walk all over the known world, spreading the Word of Jesus. 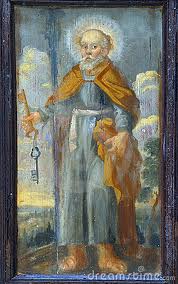 St. Peter had to walk to a town and stand up on a hill or a berm and talk.  Shout, probably.  He walked and talked and led by example.

Within 50 years, everyone knew about this Christian idea. People were joining in droves. 150 years later, the spread of Christianity was causing kings and emperors to try to squelch the tide. People died rather than give up their new found faith.   150 after that, the known world was predominately Christian.
That's fast.
Posted by Sister Mary Martha at 12:40 PM

Sister, did you forget St. Paul? "I have competed well; I have finished the race;f I have kept the faith." 2 Tim 4:7

Internet Queen! I knew this had to be your blog. Cute concept though.

Many thanks for that Sr. MM! I love your connection of St Peter and speediness :-) This will be a much happier mental image, than poor St Sebastian, when one is running a race with exploding lungs. St Sebastian, St Peter and St Paul - we are so spoiled, and how wonderful to be able to call them all. Gloria in excelsi Deo!

Sister,
If I'm not mistaken, Peter and John ran to the empty tomb when Mary Magdalene told them that Jesus was not there. John arrived first, but allowed Peter to go inside before him.
I've heard some homilists say that John waited for Peter out of respect for his office (leader of the apostles - which would later be known as pope). I could picture another theory: St. John did not want to be ritually unclean by coming in contact with a corpse. He only went in after Peter (who should be patron to all with ADHD) was inside and could tell him, "Hey John, there's no corpse in here. Come and check it out! Just empty wrappings."
That's my 2 cents. (BTW, who stole the cent sign from the keyboard?)

@Anonymous: That would probably be the programmers and coders who much prefer ^, the caret, used to signify exponents.