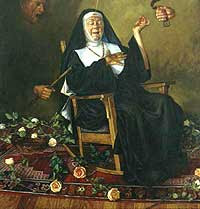 I simply must know about the painting of the nun in the rocker...there has to be a great story to that!

It's just St. Rita.  You can tell which saint is which, to a large degree, by what's going on on the medal or the painting or the holy card.  You'll notice she has a red mark on her head there.  That's because St. Rita received the Stigmata.  Not the whole Stigmata. Just the Crown of Thorns. And not the whole Crown of Thorns, just the one thorn there in the middle of her forehead, which just stuck there and festered.  It smelled terrible and the other nuns couldn't stand to be around her, so she had to spend the rest of her life in her room by herself.  But after she died, her room forever afterward smelled like roses, which you see in the picture.  That's how you know it's St. Rita in the picture.  A nun with a forehead stigmata surrounded by roses.

I can say with absolute certainty, however, that St. Rita did not have a rocking chair. The rocking chair is the whimsy of the artist, as is St. Rita's jolly demeanor.  St. Rita wasn't a particularly jolly type.  She had a rough time of it.  She had managed to talk him into to converting from his rotten ways, but for a long time her husband was a terrible man.  His evil ways caused him to be bumped off by the Mafia even though he had tried to make amends. Her sons, who had been good boys, became bent on avenging their father's death when they were older. Rita prayed they would not doom themselves to Hell by succeeding, and her prayers were answered when they both died of illness.  She wanted to be a nun, but the convent wouldn't let her in because she had been married and had children.  When she finally did get in because angels flew her over the convent wall, the nuns didn't really want her there and tested her continually, like with the watering a stick routine.  You would think that angels flying her in there would have given them pause, but apparently the nuns weren't impressed.  Maybe angels flew people in there a lot.  I can't think why they would have been so distrusting of Rita, otherwise.  Maybe the angels dropped her off and said, "This one could use some more suffering, have at her."  The nuns did pay some attention, because they let her in.

And then she got the Stigmata thorn and had to be stinky and stay by herself.  I can't imagine that she was sitting in a rocker like a drunken sailor, laughing to herself all day.  And whatever she sat on, it definitely was not a rocker, because the rocking chair was not invented until the early 18th century, 300 years after Rita went to her reward.

She probably does look like that now, in Heaven. Rocker and all.

I can't find out any information about the painting.  It appears that her mean dead husband is haunting her.  That's my guess of who that is with the cane. St. Rita is the patron saint of bad marriages, so that makes sense.

That thing that looks like a brain hanging from the ceiling is probably a beehive.  The day St. Rita was baptized as an infant, her family noticed a swarm of bees around her crib.  But the bees just buzzed around, harmlessly flying in and out of her mouth.

She also seems to be holding something in her fingers.  My thought here is that she is eating a fig.  When Rita was on her deathbed, one here cousins asked her if there was anything she they could bring Rita from her former home.  Rita asked for a rose and a fig.  There shouldn't have been any roses or figs there in the winter snow, but the cousin found the roses blooming and the fig tree with a single ripe fig.  The rose bush is still here, blooming, as is St. Rita herself.  She's still here, too.  She is incorrupt.  She doesn't look all that incorrupt to me, but she looked better when they first dug her up years after her death.

People who have visited her there in her glass case have said she sometimes moves around in there, up and down, or turns her head or that her eyes open and close.
Posted by Sister Mary Martha at 4:47 PM

How appropriate -- today is her feast day! Her shrine is across the river from me, in So. Philadelphia. Coincidentally, that's also the home of many mafia figures!

This painting of St. Rita is by Melissa Weinman. For more information about the artist and the painting, titled "St. Rita's Sweet Dream" you can view http://imagejournal.org/page/journal/articles/issue-30/kenan-essay

That's not a beehive. It is a disembodied hand with a whip. Perhaps her husband both beat and whipped her?