We're a little behind on responding to questions and follow ups because yesterday we discovered that the Baby Jesus, which has to be ready for tonight's midnight Mass, had a chip on his face. (I have not capitalized "his" in that sentence because I'm referring to the statue of Baby Jesus for the manger, so calm down. Baby Jesus does not have a chip on His face.) 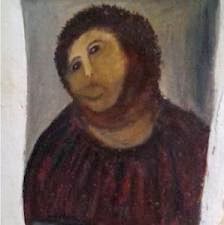 It was a gouge, really. I didn't want to end up like that poor lady who botched Jesus on the pillar. I have to say, though, between you and me, that botched Jesus makes me laugh really hard. Not because of the ruined art work (well, that too, truth be told), but because I can just imagine that lady, with the best intentions, poking away at it with her paint brush, thinking all was going along swimmingly, and then stepping back and seeing....not so much. Going from touch ups to an unfixable mess. Haven't we all been there?

So we were nervous about how to fix the statue. At least we avoided any finger pointing as to how he became chipped. It remains a mystery, although not a Sacred Mystery. Just a "he was fine when we put him in the box last year" mystery.

At least for his "birth" tonight, he's looking rosy, with a patchwork of spackle and water color paint. The spackle absorbed more paint that anticipated, making one cheek more rosacia than rosy, so we had to rosy up the other cheek. Botched Jesus could have snow balled from there. But all is calm and his cheeks are especially bright. We'll leave it at that for this year.

Then we'll let the pros take over.

So Merry Christmas! I'll leave you with some nuns at Christmas for your holiday (holy day) enjoyment. 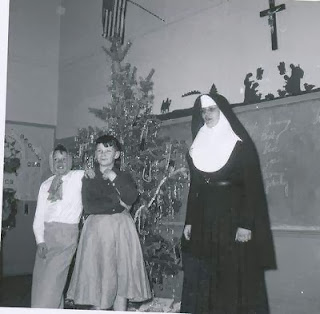 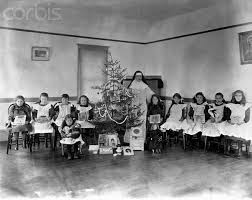 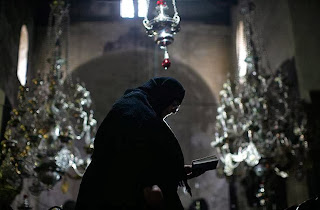 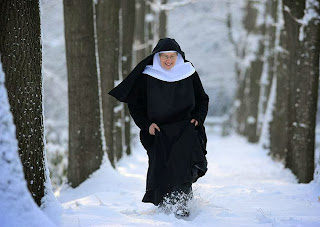 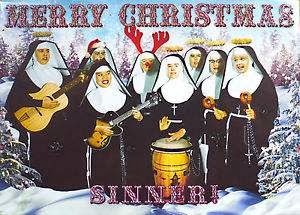 Hi, are you there right now?

Hi Sister! I'm 14, and I believe that God is calling me to be a sister. The only convent that is near me is Dominican. What is the difference between Dominican, Franciscan, Benedictine, or any other kind of sisters? How do I know which one to join? Thank you!

Abigail-
The "new" translation is very close to the words used in the early 60's right after we switched to the vernacular from Latin. I, myself, am delighted to hear a Mass so close to the one said in my childhood. I wish they would have brought back more of the gestures of humility, not just striking the breast during the penitential rite, but reminded people to strike their breasts during the elevation of the host and cup. Also I remember making the sign of the cross several times during the Mass. I have been told to do that now, unless a congregation has held on to the custom, is not in good form, we should all be doing the same thing. Most of the people in my parish don't even bow their heads when they say the two lines in the Creed where the missile actually say to bow.
I think people don't want to be humble thinking they are entitled to all God's blessings.
If a priest or many priests refused to say the new translation ordered by Pope Benedict and supported by Pope Francis, what would that say about those disobedient priests? What if one or thousands decided to get married. What are rules and vows for anyway if we can't trust those to whom we confess to keep them?