The War on the War on Christmas 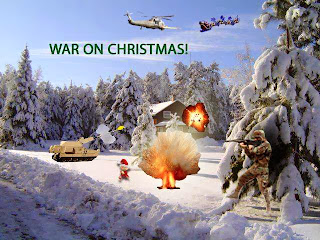 Pity you do not understand the war on Christianity in this country. Just keep those fingers in your ears and singing LA LA LA LA.

Although my fingers are not in my ears (my wimple makes that impossible), I clearly do not understand the war on Christianity in the country. I am wondering if you live in some pocket of the United States where your church was burned to the ground?

Was your family arrested? Anyone shot by a firing squad?

Were you marched into a town hall and asked to renounce your faith on penalty of death or imprisonment? And when this happened, you and the other Christians took up arms? Because that would be WAR. That would be what an actual WAR looks like. We've seen enough of it to recognize it when it happens.

Or is the possibility of violence just growing because the neighbors asked you to take your manger off your lawn? Oh, no one asked you to remove your manger? From your own lawn?
No?  Because in the United States, you have the freedom of religious choice and no one can take that away from you.

AND YOU CAN'T TAKE IT AWAY FROM ANYONE ELSE, EITHER.

Which is why, while you can have your manger on your lawn, we maybe don't have a manger in the town square.  But we VERY OFTEN do. Because we are still actually mostly tolerant of the beliefs of others. And comically, if anyone tried to only put up secular Christmas decorations, they'd fail, because practically all Christmas decorations are symbolic of Christ and the Faith. Except the reindeer. And maybe the Nutcracker. (But he was a Christmas present, commemorating the Birthday of Jesus, so....)

There is no war on religious beliefs in this country. The President and the Congress pray publicly on a regular basis. They actually shouldn't do that, but no one has stormed the halls with machetes to make them stop. Some people have merely complained about it, which is their right as a citizen, not an act of war.

Perhaps you are merely referring to the notion that because abortion and gay marriage (in a growing number of states) are legal, your religious tenets are being trampled.

But they are not. Unless you have been forced to have an abortion or marrying someone of the same sex, your beliefs are safe and sound. The rest is hyperbole. People disagreeing with you is not an act of aggression.

And, if I may be honest, comes off as a little whiney. What warlike thing has happened? I'm having trouble seeing the gunsmoke through the Christmas lights.
Posted by Sister Mary Martha at 1:24 PM

I'm not into the "war on Christmas" thing either, probably because my Dad was Jewish. I also just like "holidays" because, as you pointed out, they're "holy days."

BUT. Having to pay for contraception for others which I believe to be a mortal sin (and in many cases causes the death of the unborn child), IS an attack on my religious beliefs.

When the ACLU sues the USCCB for directing Catholic hospitals not to perform abortions, that IS an attack on religious freedom.

It's unfortunate that the "war on Christmas people" muddy the waters when there are real attacks on beliefs going on. Still not a war - as you point out, we're not fighting back!

Loves me some Sister Mary Martha!!

I mentioned that in this county Christianity is a religion that it is OK to discriminate against in this country, she told me I was crazy. But I honestly believe that.

I think your commenter was the one with fingers in her ears going “LA LA LA.” You are right. She is deluded—I suppose we should pray for her.

God bless you, Sister. Your response to this subject is the best I have ever heard.

Wendy, no religious institutions are being 'forced to recognize' same-sex marriage--because for the government to do this would be illegal, as Sister points out so well. nobody is being forced to lie about their beliefs, or being forced to do anything, in fact.

thanks for the good words, Sister. longtime reader, first-time commenter. I might even have a question for you in me somewhere.

We're doing a Jesse tree devotion in my house of many children, and my oldest (17) has lately been questioning the God of the OT, who comes off as a little, um, ungodly, sometimes. Last night we were reading about Moses and Pharaoh, and he asked whether God actually did evil in sending plagues, hardening Pharaoh's heart, etc. I know good St. Augustine had trouble with God's wrath and vengeance, but where can I point my son to give better answers than the feeble ones I can offer?

On Topic: in our local paper this morning, here in Brisbane, there is actually an article written by an Anglican priest, in which he is exhorting Christians everywhere to step back from Christmas altogether; he says we should just leave it to the shops and the secular enjoyment of the day, and instead reclaim the Incarnation by turning our focus to Easter instead.
Not such a bad idea, really - there is never going to be a widespread resurgence of the religious significance of Christmas,that is a losing battle, and it was a pagan festival in the first place,wasn't it - adopted by the Christians in about the 3rd or 4th Century.

I agree with Wendy: there IS religious persecution taking place in this country. Our bishops recognize it and we need to take them seriously.
As for a "War on Christmas...." how does one explain the thinking behind this---http://newyork.cbslocal.com/2013/12/19/some-parents-upset-after-l-i-school-removes-religious-references-from-silent-night/
This took place on Long Island, NY. That parents barked back at the ridiculous antics of the school administration (what on earth were they thinking?) is heartening to me.
That said, if someone wants to wish me a happy holiday, fine. I will respond with "Merry Christmas" and allow the chips to fall where they may.