A reader wants to know where I find embroidery transfers.  Surely everyone knows about Aunt Martha.


And then there is that phenomena that occurs when people know you do that type of thing. I've had people unearth all kinds of old patterns and give me copies. You might try ebay, too. From there you'll find people who have shops with all kinds of interesting things in them. I like to window shop. 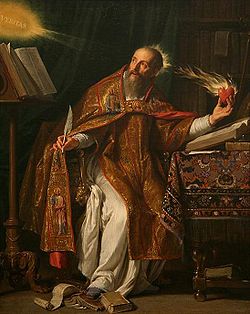 I understand that one of your favorite hobbies is patron saint matching; I could use your help with this. My husband is going through RCIA and is in need of a patron saint. He is a wonderful father, loves to study theology, play music... he also volunteers to lead music at a Christian 12 step recovery program (in his younger days, he was an addict himself). He has been debating between St. Michael, St. Thomas Aquinas, and St. Augustine, as well as a few others.
Any suggestions from you would be greatly appreciated!


Well, St. Augustine was a father, too. And a party animal in his youth.  And talk about studying theology! Doctor of the Church, anyone?


He said things like: "Lord, make me chaste, but not yet."


And this gem that the AA crowd would surely appreciate: "Complete abstinence is easier than perfect moderation."


And here's a flash for you, St. Augustine was struggling with surrendering to the Christian ideals his mother held out to him. One night he heard a child singing, and the song stuck with him. When he returned home he opened to the New Testament to read a passage from Paul: (Romans 13: 13-14) "Let us walk honestly, as in the day; not in rioting and drunkenness, not in chambering and wantonness, not in strife and envying; but put on the Lord Jesus Christ, and make no provision for the flesh, in concupiscence."


I think that's a pretty good match, don't you? St. Augustine has everything in there, even music as an inspiration for goodness and staying on the right path.


Bonus!  Like RCIA converts, St. Augustine was baptized on Easter Sunday!
Posted by Sister Mary Martha at 12:08 AM

My copy of Magnificat did say anything about today's saint! I'd love to hear the answer.
Can you suggest a good Confirmation saint for my 15 year old son? He is VERY interested in the military. There are a couple of Servants of God that I thought of, but I don't think they're eligible to be patrons. St. Michael fought the devil, but he's sort of taken, because that's his brother's middle name.

Anonymous-- what about Ignatius of Loyola? (Or Joan of Arc if your son doesn't mind the gender thing.)

Sister, I'd like to thank you for the idea of St. Augustine. Even in my protestant days, he was an inspiration throughout. I'd be more than happy to call him my patron. Thank you once again, and I appreciate you keeping my wife giggling when she reads through your posts.

Sister, I love the infor about St. Augustine. I have a son who is suffering from addiction and it is a most difficult journey that our Lord has taken us on. But, I am learning so much about what is broken in ME!! Reminders of those who have been able to return to God from addiction gives me great hope. Thank you so much.

Anonymous, what about St. Demetrios, patron of Thessaloniki? Athletic in appearance and heroic in spirit, he became a high ranking officer in the ROman Army but considered himself a soldier of Christ first. He was born in 270 ad, before Christianity was made legal in the Roman empire, was captured, tortured and believed only in Christ. The Emperor Maximilian had him executed after his follower, Nestoras, asked for his blessing to fight in the upcoming gladiator games; because he killed the emperor's favorite gladiator, Leo, he was beheaded on the spot. After realizing that St. Demetrios was the inspiring power behind Nestoras, the emperor ordered St. Demetrios to be beheaded by spear. He is said to have intervened in many attacks on Thessaloniki.

Update: My son wanted a saint who was saintly while still being a soldier, as opposed to one who began to be a saint after leaving military service. I found a website called CatholicMil.org, which had several pages of catholic soldier-saints, all kinds! I suggested St. Constantine to him, and he liked the idea. Now that we've decided that, I wanted to find some more information about him, but can't find much in my (many) books! Is he bigger in the Eastern Orthodox church? Come to think of it, I know two men named Constantine, and they're Greek.