The Lenten food is coming out of the wood work.  "Another country heard from", as the saying goes. It seems every ethnic group and conclave has some kind of Lenten tradition.  It was to be expected.

Perhaps before Lent actually arrives next week, we'll have a world food tour via our readers.  Since just about every group has representatives in the US, we get quite the smorgesborg.   (And we can thank the Swedes for that.) 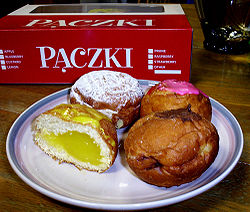 I'm unimpressed by hot cross buns myself, but I'm sad that there's no way for me to get fresh paczki in Los Angeles. Unfortunately my parents are visiting from Chicago on Ash Wednesday, not Fat Tuesday. No paczki for me!


Now I could get behind this treat!  Think "jelly donut".  Only better.  Because the batter for the dough is really, really rich with butter and eggs and sugar. And whiskey!  Then it's stuffed with fruit or creme. Then they put powdered sugar or glaze or icing or dried fruit on top.

I've never had one, but if I could get my hands on one I would be pleased.

The Polish people make and eat these for Fat Tuesday, the day before Ash Wednesday, in a true Lenten tradition (unlike hot cross buns!) of using up items in the pantry that we won't be using for weeks because we are about to fast and do without.  I can get behind this tradition as well.  We're working on that this week, as a matter of fact.

We've had some odd dinners. Everything has jelly on it.  We're keeping the peanut butter.

Which, contrary to popular belief, is the meaning of Fat Tuesday, basically eating everything in the pantry.  I believe it's come to mean, "have a big party with lot of booze."  That is not a preparation for holiness. You also run the risk of having a hang over and missing Mass on Ash Wednesday.

At least you'll have a big fat headache with which to align your suffering with Christ.

But it's not Lent yet!  So I'm going to tell you where to get paczki in Los Angeles.  Next door to Our Lady of the Bright Mount Church is a Polish home called SZAROTKA (3400 W Adams Blvd., which I think is at Adams and Crenshaw, but don't go by me, go by Mapquest or something).  I believe you can go buy paczki on Sundays there.  I even found you a phone number so you can call and place an order: 323 735 1381.   Let me know if this works out for you!
Posted by Sister Mary Martha at 11:54 AM

Did you know that the File-o-Fish was created by a Catholic McDonald's own specifically for the Meatless Fridays (which were all Fridays in the past)? Sounds like a question for Jeopardy to me...

I love Paczki. I had it once and it was one of the most delicious experiences of my life.

My favorite "lent" food is potato pancakes (even though we have them other times of the year). I never thought I liked them until last summer when I tried my grandparents' (they are of German heritage and I believe the recipe has been passed down). So good! Like hashbrowns, but a little more substance.
Of course then you get the arguments about toppings; applesauce, ketchup, syrup or just butter and salt. Everyone has an opinion!
Pair them with some fresh fish if you have it.
Of course, I suppose it falls under the "lenten treat" umbrella so I probably should not have them.

But did you know that prior to the Filet-O_fish, McDonald's produced a meatless sandwich that did not sell well. It was called the Hulaburger. It was basically a cheeseburger but instead of the meat it was pineapple.

All very good except that the doughnuts are eaten on Fat Thursday, which is today!

Thank you, Sister! That's not especially far from me. I'll have to see if they have my favorite, with the rosewater jam filling, but I'll try anything! (except Chocolate, which my mother offered, because at that point I may as well just get krispy kreme).

I'm actually kind of excited my Mormon parents are attending our Ash Wednesday service, even if it's only to hear the choir. I was worried it might be to alien for them, but they seem to be OK with it. They know enough not to accept Communion (which they wouldn't do anyway, on account of the wine) but I wonder if there are any prohibitions regarding the ashes. May my parents accept them, or should they avoid?

Love your blog!
In a discussion today about Lent with a group of knitters in my yarn shop, one woman said last year she did something nice every day during Lent for people she didn't know; a small compliment or the purchase of their coffee or something like that without expecting or looking for an aknowledgment of the random act of kindness.
I think this is a much better thing to do for Lent than "giving up" something. After completing an act of kindness every day during Lent, the process will become a habit. Just think how much improvement the world would gain if everyone did this during Lent!

A treat from New Orleans is the Kings Cake. Which is round and decorated with purple, green and yellow sugars. It is a yeats break and is in a circle.

Inside you will find a small baby Jesus, I do not know what you do with him, but I think the person who finds baby Jesus must supply next years cake.

This recall is 30 year old information and I could have it mixed up with the traditions. The cake is served pre-Lent.

To the original commenter: why not try making your own Paczki?!

My mother, may she rest in peace, loved hot cross buns. She bought a pack every year and ate them by herself, since no one else would eat them with her (bleh!). A couple of years ago I was missing her so much and remembering how she loved them. Since I don't live in the US, and can't go out and buy them - even for reasons of nostalgia - I decided to make some myself (I make the dough in my bread machine). Oh my! Fresh baked hot cross buns with real, fresh grated orange peel and dried fruit. To die for, I tell you! Now I get to carry on my mom's tradition, only everyone actually loves eating them with me!

The paczkis look wonderful! Now I'm going to have to Google where to find them here! Thank you for all the advice and instruction on Lent too. I'm a new Catholic this year, and am loving learning about the Church. You have taught me a lot, even before I thought about becoming a Catholic.

Sister, my family is from Louisiana and the crazy hang-over party was also about cleaning out your pantry! If you're fasting and abstaining during Lent, you can't have all that rum hanging around, can you?

I second King Cake! It's all through Carnival season (starting on the Traditional Epiphany of January 6) through Mardi Gras. Yes, the plastic baby Jesus is the sign that the person who gets it must supply the next year's cake.

My Family Gathering this Sunday is going to have pancakes for a snack, and some pancake races just for fun, before we get down to the serious business of family discussions about how to observe Lent. In England, Shrove Tuesday is also called Pancake Tuesday. Use up all your butter & eggs...and here in New England, we also use up all of last year's maple syrup, just before sugaring season begins!

I made some today.
I Cooked apples to stuff into the centre, but I forgot. (Mea Culpa)
So now I have Caramelized apples and a bunch sugar doughnuts.
Oh Well. :)