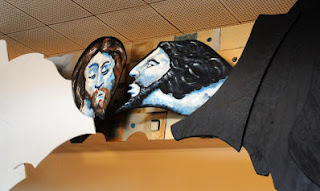 Dear Sister, where or when did the Holy Father ask us to use the new Stations?

And I wonder if, when he did, he meant in any way to nudge us away from the traditional ones?

I for one don't think I can ever let go of my traditional ones. I also respect the luminous mysteries but don't use them (and if someone gives me a hard time I will point out that in Pope John Paul II's own letter he encourages and suggests but in no way requires that they be used).


But perhaps I have overstated the case when I said he asked us to use them. He approved them for use.

The thing is, he is using them.  If there is a person on this earth that must lead by example, it's the Pope.  The new Stations were first used by Pope John Paul II on Good Friday of 1999.  That's quite some time ago now.


I can't help but think that he is indeed  "nudging us away".  If he isn't, what's he doing? Having a nervous breakdown?  Showing us some other Stations for the fun of it?  He was bored of the old Stations? Of course not.


Don't get yourself in a knot.  The Stations Police aren't on their way (with the Rosary Police!).  There's no edict.


I will crawl out on my own limb here and say that I believe I know what the Pope is thinking by using the New Stations.  The greatest debate between the Catholic Church and the Separated Brethren is Scripture.  The King James Bible made changes to the language of the Bible and what books are in the Bible to suit Protestant beliefs.  The Catholic Church takes into account Sacred Tradition (incidents and ideas that are not in the Bible, such as the Immaculate Conception of Mary).


Here we have a holy tradition called the Stations of the Cross and lo and behold about half of them are not in the Bible.  So let's meet in the middle and look at the true path that Jesus walked to Calvary.  We don't have to quibble about what did or didn't happen.  This is a set of events on which we can all agree without parsing words.  Let's go for it! 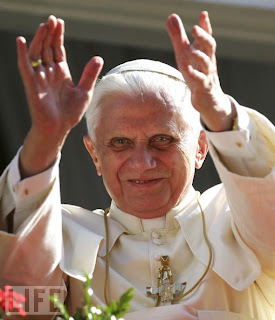 Our goal here is not to stubbornly insist that our beloved Stations are based on holy traditions or  Sacred Traditions (and sit around for another 500 plus years trying to explain the difference).  Our goal is to help everyone walk the path of Christ. We (Separated Brethren and Catholics) can agree on that much, can't we?


I believe they still implement the old Stations at the Vatican, too. But on Good Friday, when the world is watching, it's the New Stations all the way.  As Catholics, we believe that the Pope is the representative of Jesus on Earth and has the power and blessing of Jesus. To follow Jesus, we follow the Pope.


And the Pope is doing the New Stations.
Posted by Sister Mary Martha at 12:46 PM

As a member of the seperated bethren, I would like to ask what changes were made to the King James version of the bible to suit Protestants? Besides translating the bible so people could actually read it- and leaving out the Apocrypha?
Thanks

As far as translations go, the Vulgate was a translation into the most widely used language of the day. English translations began in 1832.

Leaving out the apocrypha is exactly what Sister Mary Martha is talking about. They were in the Septaugint, and it seems to have been good enough for Jesus, so we kept them too.

For that matter, so did Martin Luther and King James. see Why Catholics Changed the Bible. In fact, they were kept in the Bible until 1827.

Sister, a little while back, you mentioned a blog called Catholic Cuisine. Thank you for that--I'm excited to try the recipes, and I'm passing the word.

"Let's hear it for change." Sister I am always thoroughly engaged, educated and humored by your posts. Thanks for your insights and wit!

Actually, the KJV was not the first English version of Scripture. And Arkanabar, I think you meant 1535, not 1835?

The original KJV actually contained the "apocrypha" or Deuterocanonical books. Parts of the bible had already been translated into Old English hundreds of years earlier. It wouldn't have made much difference, as most people couldn't read English any better than they read Latin or Greek!

Thanks SMM for repeating what we have in common, rather than focusing on differences. I am a separated sisteren who has prayed through the Stations for several years during Lent, and find it gives meaning and depth to the season.

Thanks also to Arkanbar for the link. This is the best info I've seen on the how the difference in the cannon ended up in the Bibles published today. Luther's German translation and the King James translation both contained the deuterocanonical books! I had no idea!

I'm curious, Sister-- did you end up indulging on Laetarae Sunday?

I think that Arkanabar used the King James as an example because it became so widely used. After the printing press as invented, the common people did learn to read their local languages, so translating the Bible became an important issue. Two of the most widely used translations, Luther's German Bible and the King James version did contain the deuterocacnonical books for until the early 1800s.

Has anyone read the current New York Times #1 bestseller? It's called Heaven is for Real, a true story about a little boy who undergoes life-saving surgery and then comes out of it describing a trip to heaven. I'd love to hear what anyone has to say about it. I finished it this weekend (it was a 3hr read) and I like the part about fighting the devil at all times and Jesus's markers (the owunds of Christ). I wasn't keen on animals in heaven, Jesus's rainbow horse or that everyone in heaven has wings.

I think this is where the 1832 glitch came from...(From the website link in Arkanabar's post to the tryingtoflywithonewing blogspot):

"THE APROCRYPHA FORMED AN INTEGRAL part of the King James Version of 1611, as they had of all the preceding English versions from their beginning in 1382....
I read how the Bibles had remained essentially unchanged until 1827, when the British and American Bible Societies politically forced Bible publishers to stop including the Aprocrypha in their printings of the Bible."

One thing for sure, there are a lot of dates involved when one speaks of the Bible!

Without Luther's passion for the "Word," I wonder if we Catholics would be reading the Bible now. No matter what translation we read, we can offer prayers for each other!!!!

There is no official version of what goes at which station - the requirements for the indulgence say only that you have to meditate on the passion and move from station to station. At least, this is what I seem to remember reading - anyone got the Enchiridion Indulgentiarum?

Why are recent Popes so anxious to please the Protestant "separated brethren"and non-Christians? What ever happened to teaching all people about the True Church, the Roman Catholic Church? To saving souls? We are still to believe EENS, and the Popes confirm this, but then they try to please non-Catholics with "more Biblical" Stations and "more Christological" Luminous Mysteries. The latter upset the whole structure of the Rosary so that it no longer corresponds to the 150 Psalms. John Paul II could have just suggested a Luminous Mysteries chaplet rather than an "optional" new set of Mysteries for the Rosary. As a chaplet, they're fine. But calling them "more Christological" has the implication that the Joyful, Sorrowful, and Glorious Mysteries are not Christological, which is incorrect.

A lot of things are not in the Bible, including the Immaculate Conception and the Assumption of Mary, but those two are not only part of Sacred Tradition but are dogma. The Early Church Fathers did not accept everything proposed for inclusion in the Bible but they kept St. Veronica, even though she's not mentioned in the Bible. She's part of Tradition. She'll never be dogma but why must she be thrown out just because she's not in the Bible? The story of Judith slaying Holofernes isn't in the Protestant Bibles, neither is the story of Susanna and the Elders or the stories of the Maccabees or the Book of Wisdom.

The Apostles' Creed isn't in the Bible but also comes from Tradition, yet Protestants say it. It's kind of funny because growing up Protestant I said the Apostles' Creed every Sunday in church, including, of course, "I believe in the Holy Ghost, the Holy Catholic Church, the communion of saints…" I say it's funny because many Protestants are very anti-Catholic but in saying the Creed, they say they believe in the Holy Catholic Church. Then they give their children lame explanations about how their church, whatever denomination it is, is the "real catholic church" and Catholics are idol worshippers who confess to the priest and then are free to go out and sin again. They also don't have a clue what "the communion of saints" means, since Luther deleted parts of the Bible that support the existence of Purgatory. And if the Pope isn't helping to bring them to the Truth of the Catholic Faith, who will?

We have the Ten Commandments,Beatitudes,Prayer of St.Francis of Assisi,and much more to follow the Word of God,in Faith,Hope Charity,Love. Today starts Holy Week. Jesus Died on the cross for OUR SINS. The traditional stations of the Cross depict His suffering and death.By humble meditation we can feel the Holy Spirit move us to be better in all aspects of life. The world has many ills,cancer victims,aids,diseses of every kind,mental disorders,birth defects and so on. Why The Peace and Justice Committee in my parish introduced the" Stations of the Cross for Migrant Workers" with documentary on screen. We also had to watch a week of slave trafficing and were told to pray it ends and also to report if we saw anything suspicious.I'll pray and leave the rest to law enforcement. Don't get me wrong I have compassion for migrat workers but researching Peace and Justice Committee I ind they are blaming the government and us for not treating the illegals with dignity.The Bishops working with committee wants you to write your Senators on passing bills for illegals on health,immigration,education and housing. This is sooo political.Not all Catholic parishes have a Peace and Justice Committee better known when reading under Bishop Conference it is called Social Justice. Check it out yourself don't take my word for it. Thinking of changing to another parish where I can Praise,Thank God and receive Spiritual guidance without the politics.My feeling the Peace and Justice Committe has put Jesus's Suffering and Death on the back burner and put the woes of migrant worker in forefront,What will they change with His Birth.Some Priest up north are not aware of or ever heard of The Peace and Justice Committee.My opinion the are Socialist in a bad way.