The Treasures of the Church

Sorry for my prolonged absence.  We had to stop everything and build an ark.  Today is absolutely beautiful, but the rains are returning tomorrow. Meanwhile, we have some fish to fry.
As someone who has problems with compulsive spending and debt, is there a patron saint (or saints) to pray with? Mainly concerning debt.

Thanks!
Of course!  The original meaning of the word "patron" is all about support, mostly financial. St. Augustine would have been bounced out of school without the generosity of his patron.
Right of the bat, we have to mention the Infant of Prague, for financial stability.  I've heard people also mention St. Matthew, as he was a tax collector (and the patron saint of April 15th), he is also the patron saint of accountants and bankers and paying off debt. 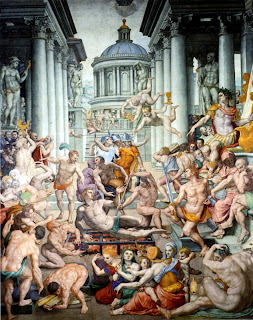 But I can't help thinking that for you, the way to go is St. Lawrence.  He is officially the patron saint of cooks, because he was roasted to death.  To help you, we have to take a look at why he was roasted to death.  He had been told by the new regime in town to bring all the Church's treasures over and turn them in.  The Powers That Were gave him three days to accomplish this.
St. Lawrence spent the three days frantically giving away everything he could lay his hands on to the poor.  Then he gathered up all the sick and the lepers and the homeless people and the drunks and the sinners and brought them in at the appointed time.  He announced to the Powers That Were, "These are the treasures of the Church." They were not amused.
So they grilled him.  Literally.
I suggest him, because I think it would be a good idea for you, going forward, to keep in your mind and heart what real treasure is and what constitutes actual wealth and what need really is.  St. Lawrence had a handle on that.
Which brings me to this, which has been bothering me for days:

Last year 2010 Holy Thursday a dozen or so people showed up for the stations none of which were ever present the previous weeks of lent.They showed videos on on migrant workers,starving children,abused,illegals etc. I didn't understand the language because most was in Spanish with captions in English too small for me to read. I was so yearning to meditate on Jesus Passion and felt empty.I inquired to the deacon What was this all about ,he rolled his eyes and did not answer. After Easter I was still kind of disturbed and had to inquire about the presence of the unknown to me group.I found out they represented The Peace and Justice Committee. Bishops in Florida call it Social Justice. I am praying for understanding as to why the Catholic Church is getting so Political and is focusing change here in Fl.and Not the majority of northern Catholic churches.Lenten season builds up to Christ's Passion and Death on the Cross.We are Gods creation,we are Not Jesus but we can strive to be Christ like. The new theme presented in church past few weeks is on Human Trafficking again through the Bishops of Florida and the Social Justice Committee. Don't we have Law Enforcement to take care of these crimes.??


This might be a good time to re-read the New Testament in which Jesus said, in every way he could think of to say it, "Whatsoever you do to the least (LEAST!) of My brothers, this you also do unto Me." Hence, you were watching a film about Jesus in need.


Would you feel better if they just called it "Justice" and dropped that scary word "social"?

Do we want prayer in school?  Yes.  do we want to  take on the idea that social ills are ultimately human problems solved by human love and compassion and not politics? No.
There are lots of problems in the world and we can't solve all of them. And we are not Jesus. But have you ever heard this saying, "Perfection is the enemy of the good"?  It means because we can't solve everything we solve nothing. It means because we can't do everything, we do nothing.  We aren't called upon to just do what we can. We are called to do as much as we can.  That starts with knowledge, understanding.
And compassion for the Treasures of the Church.
Posted by Sister Mary Martha at 2:01 PM

I was thinking of an ark, too, as we headed north out of L.A. Sunday afternoon after the RECongress. That was until we hit the "blizzard" in Tejon Pass. We made it safely back to sunny Washington state.

In the meantime, one of my companions on the trip was suffering from serious back problems. What patron should I pray with for him?

A separated sister from Florida here in complete agreement with your answer to the second question -- in this country we have politics and law enforcement and social programs precisely because the church (in all her forms) has failed to step up and steward her Treasures. Thank you, Sister.

Hello Sister! I have a few questions based on some things I heard a Catholic friend say. She basically said that if you commit a sin unknowingly, that it is not a sin, or rather, that you can't be punished for it. Assuming that what she said is true, does this mean that one could commit a mortal sin without meaning any harm and "get away with it" so to speak? I really don't understand this concept.

She also said that sin can not be forgiven unless confessed to a priest. I am not Catholic, but I think I pretty much get the jist of confession. Is a priest absolutely necessary for the forgiveness of sin, or just to ensure a complete verbal confession so that God can forgive the sin? In other words, if a priest were not present, and the person confessing gave a complete confession and was honestly sorry for their sins, would the confession still be void due to the absence of a priest?

Thanks so much Sister. I am so grateful for your blog and the light it sheds on things I would otherwise have very limited insight into. :)

We really liked your blog today. That was a beautiful story about St. Augustine. What a man of Christ.

Also, your reply to the commentor regarding last year's Holy Thursday, brought forth the idea of compassion for the Treasures of the Church. Yes, we do need the police and politicians to fight crime and poverty, but it is within ourselves and by the actions we take, that allows us as individuals to also fight these problems.

You cannot unknowingly commit mortal sin. Culpability for sins you don't know about is reduced, but not eliminated.

It is possible to obtain forgiveness for sins without the Sacrament of Reconciliation. This requires a state of mind called "perfect contrition." The problem is that it's easy to fool yourself about this. But in the confessional, perfect contrition is not required. That's one of the reasons I love the confessional so much; it's a guaranteed deluge of grace from the Divine Mercy.

I loved your response to the second person, Sister.

As a local representative for Human Trafficking Awareness the largest obstacle for me and my mom (co-rep.) has been that a lot of the people in our parish don't seem to connect the problem of human trafficking with the suffering of Christ, much less a community wide call to justice.

Even worse, Many think that we're trying to say something controversial about immigration and tune us out thinking we're "talking politics". Oy.

I've been encountering a lot of people at my parish who don't see why we're trying to tell them about human trafficking.

Particularly frustrating are the ones that dismiss us thinking we want to promote illegal immigration or some nonsense. Even a hint of controversial politics seems to turn people off. I digress.

thank you again, for hitting the nail on the head.

"Social Justice" is simply the Kingdom of God. Jesus told US that we must care for one another. Then he will say to those on his left, 'Depart from me, you accursed, into the eternal fire prepared for the devil and his angels.

Anonymous, about those sins, in order for it to be a mortal sin, it must be a serious matter, you must be aware that it is seriously wrong and you must do it willfully.

It isn't so much that people "get away" with sins as that understanding of sin varies; as you grow in faith, you might pay closer attention to church teaching, thus would gain a different perspective on actions you have taken, so at some point might realize that an action is sinful even though you weren't raised to believe that action was sinful so you didn't think it was a sin when you took that action.

Catholics believe that missing Mass on Sunday without good reason is a mortal sin, however, some Catholics lack good catechesis so are unaware that it's a sin. If you don't know any better, you haven't committed a sin; if you later learn otherwise and continue to miss Mass without good reason, you have then committed a sin. You still have a free pass as to those Masses you missed when you didn't know it was a mortal sin, but once you learn otherwise as you grow closer to Christ, and gain a better understanding of sin, you might be inspired to confess anyway, to reinforce to yourself that it is a sin and to let Him know that you know better now.

A priest is an absolute requirement for Confession; there are times when the priest isn't the priest, but rather Jesus speaks through the priest. Confession is one of those times. You ask for forgiveness, enumerate your sins, have contrition, receive penance and absolution, make an act of contrition and when you leave the confessional, perform the penitential act.

St. Faustina's Diary and St. Teresa of Avila's "Story of a Soul" are both good places to learn about sin, confession, contrition, loving God and being loved by God.

Anon and Maureen, I'm one of the people who doesn't want to hear about social justice. It isn't a good fit for me, either by personality or charisms. The following may not be true for you or your parish, but what I find off putting about calls to work for social justice are: a) the lack of understanding that oftentimes it is actually marxism that's called for; b) the focus on social justice to the exclusion of worship; c) the demand that everyone be involved:
d) the failure to see that other things are equally important.