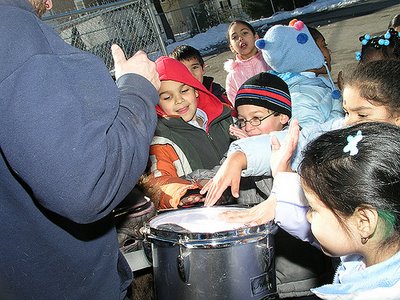 Now we've had a quiet couple of days since our house is back to normal. This gives us time to reflect. We're not cloistered nuns who do nothing but reflect, meditate and pray. We're distracted by sewage and deadlines.

When I think about nuns in the cloister and how they spend their time, my mind turns automatically to St. Therese the Little Flower. She had enough time to add subcategories onto her own name. It got pretty long....there was more after the Little Flower. Jesus is in there somewhere.

St. Therese was not the sharpest knife in the drawer. She had wanted to become a missionary and die a martyr but things didn't go her way. She decided to use every aspect of her mundane life as an offering. She used every opportunity to suffer for the Poor Souls in Purgatory, sleeping with no blanket in the winter and a wool one in the summer....that type of thing.

She kept a careful record of all her sufferings, saving someone in heaven the task of tallying up her sufferings to bounce over to the suffering souls. I wonder who's job that is? In heaven, I mean. Who has to spend their eternal happiness figuring out who still has to suffer and how much and how much my suffering counts towards theirs?

We all suffer differently. One person's suffering is another person's delight. Just ask all those Germans running around in leiderhousen out in the desert. They love it there.

For example, I can sit in a room of kindergarteners banging on toy percussion instruments pretty much all day. It doesn't matter how many of them there are or what they are banging as long as it doesn't actually hurt my ears. They're busy and happy and out of trouble. (Unless I knew they all had dirty hands, then it would drive me crazy.)

Sister St. Aloysius would have to be carted off to an asylum after about six minutes of that. (If they had dirty hands on top of it, she'd need an IV.)

On the other hand, when we're watching basketball and someone we like makes a shot, Ben Wallace, say, or Sam Cassel, Sister St. Aloysius claps her hands. There is something about the sharp sound of her clapping that just kills my ears. It's everything I can do not to leap up and tie her hands behind her back with my giant wooden rosary.

So you can see how our suffering when we're in Purgatory could be quite different. For me, all they would have to do is play that "El Pollo Loco" jingle (where the guy sings "EL ! Po yo Lo-co!") really loudly over and over again. Or the Navy Marimba Band playing "Blowin' in the Wind".

If you ever have guests that over stay their welcome, just get yourself a copy of the Navy Marimba Band playing anything at all and they'll clear right out.

I would think that they had some sort of system in place in heaven to sort all of this out. By now they will have to have gone digital as our causes of suffering and our ability to tolerate it are ever-changing.

Truthfully, the modern world offers opportunities to suffer that self-flagelating saints never dreamed of. It would have been fun to sit in a traffic jam caused by looky-loos with St. Francis of Assisi. We could listen to books on tape together. How would St. Christopher have handled it when the person in front of him on the escalator got off at the top and just...stopped? That can cause death and mayhem. What would St. Catherine of Sienna who never ate anything but the host think watching people pound down a Whopper with fries and a Diet Coke?

I know what I think.

That's why I know I'll be in Purgatory.


Maybe I shouldn't let anyone know what bugs me.
Posted by Sister Mary Martha at 4:30 PM

Being a Catholic ain't always so much fun, is it Sister?

Sister, when will you start selling sacrifice beads?

I suppose I could start tomorrow.

Alexa, no one ever said it was supposed to be fun except the person that invented the Hootenanny Mass.

In my Purgatory I'll be made to watch TV and listen to Jose Feliciano singing "that" Christmas song. Just the thought of it sends hot chills down my spinal discord.

I think I'm in purgatory now. At least that's what the voices are telling me...

In Purgatory I will be given a radio, and every station I turn to will be playing the last ten seconds of one of my favorite songs. And the nose-picking kid who always comes into my work will be there, trying to shake hands with me.

Hurray! Thank you, Sister! I've been thinking of buying some, but I'd rather buy them from Heaven Help Us than another site. :-)

I wonder if St. Therese's untimely death was in any way linked to her sleeping without a blanket in the winter? She did die of tuberculosis, after all...compromised immune system?

I'm not entirely sure what my Purgatory experience will entail. My guess, though, is that it will include a lot of people who all need to talk to me at once and yet never get to the point. Drives me NUTS! And it will probably include a daily Hootenanny Mass.

Yeah. Who IS that person anyhow? They'll be in purgatory for a LONG time I suppose!

Purgatory for me would entail having to keep the same template for more than a week!

I think the Hootenanny Mass would about do it for me. Maybe with a Polka Mass thrown in for variety every so often. Do you get plenary indulgences for having raised children?

BTW, I thought the religious orders usually tried to restrain overzealous nuns and monks from self-abuse. Maybe you could do a post on the why of the exceptions. I seem to recall reading that St. Lutgarde used to have to get permission from her superior to go on her shockingly long fasts.

cminor, not only do parents NOT get special indulgences for having been parents, they are only one rung up from the clergy in terms of punishment. The clergy get it the worst because they have authority over people's souls, so when they fail, it's a very big deal.

But that's also true of parents, except they might not know any better and the clergy has no excuse. So parents are just one step ahead.

And the clergy does discourage extreme self discipline. I always thought it was because it's just a little embarrassing, or can be. Almost all the saints who did that sort of thing died very young. We can't afford to be losing clergy these days.

Purgatory I can deal with. It is manifested itself in my daily life as the company I work for.

Now pure hell? That would be remaining to work there for the next 25 years.

Sister, this may be a bit off-topic, but I tagged you for a meme! What that means is that I filled out a fun little blog (or online essay) questionnaire thingy, and if you like you can also fill it out and post it on your blog. I know it sounds a little silly, but isn't blogging itself silly?

myblog, I always encourage people to pray for the intercession of Pope John Paul II, the patron saint (in my opinion) of being happy in a job forever.

I need to have a Harmony.com site to match people and their saints.

tracy, the computer can't find the site you posted.

That's odd, because mine can. Anyway, it should be up on my blog (www.catholicknitwit.blogspot.com).

I love your blog. Please tell us more about Sister Allowuis..(spelling-sorry).

Oh, well. I guess I'd better get busy praying, or it's centuries of Hootenanny masses for me. (Sigh.)
I guess kids don't count as redemptive suffering?

No, Mrs. Minor, they don't. Especially when you take that attitude. Where a scapular and shoot for a Friday passing...that's your best bet.

Your 'blog upsets me. I just hope it doesn't upset Jesus, but it may, since it disparages saints and other friends of His.

St. Therese of the Child Jesus and of the Holy Face coughed her lungs out, literally -- she didn't actually bring that onto herself, but she offered it up in love.. perhaps for those in self-made Blogvents. She was named Doctor of the Church (her what, foolishness notwithstanding?) as well as Patroness of the Missions.

I think maybe a little respect for all the saints is not enough.

I'm finding it harder and harder to believe you're not Christopher Hitchens.