The Patron Saint of ADD

Hi Sister! I need your help with helping to choose a confirmation saint for my husband. Well, he needs your help. He's an artist, but also really into comic books. He's got really bad ADD, and has a hard time finishing things. He also is a revert and came to the Church a bit later in life though he was baptized Catholic. I thought Augustine would be great, but he's read about him and doesn't feel like they have a lot "in common." Any thoughts? A couple he could read up on would be great!

Yes! I would recommend St. John of God.  He is one of my favorite saints, bouncing rootlessly from one thing to the next until he had a complete nervous breakdown.  Then he became a hero. How's that for really bad ADD?  He also came to the church later in life.

And!  He sold holy cards.  I know it isn't comic books, but they didn't have comic books back then.  People don't seem as fascinated with holy cards these days, but when I was a child there was always a stock pile of them at the back of church and a pack of different ones from which to choose at every funeral.  I still have a large collection left from everyone in our family who has gone to where the woodbine twineth. 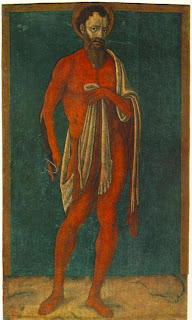 The boys always liked the ones that were rather gruesome, like St. Lawrence being roasted, or St. Sebastian shot full of arrows.   St. Bartholomew having his skin peeled off was a big hit.

Personally, I liked variety and gravitated toward action pictures, rather than a picture of some old saint with his head bowed, staff in hand, book in the other.  I liked St. Mary Magdelene, draped over a big rock, praying for forgiveness.  St. Rita with a heavenly light drilling a permanent hole in her forehead.  Or if they were just going to stand there, at least be standing with something interesting. St. Lucy with her eyes on the plate.  St. Catherine of Alexandria with her giant spiked wheel. 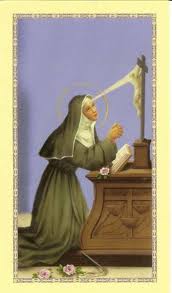 I'm sure I came by this interest because of the statues lining the aisle of my parish. There were pillars all the way up both sides of the church and each pillar had an almost life size statue of a saint.  I'm sure some of them were life size, because people used to be much smaller.  I used to stare at them until their eyes blinked.  Ever do that?  If you stare long enough their eyes will blink.

But I digress.  If your husband likes comic books, he also likes heroes.  St. John of God became a hero. He ran a makeshift hospital, begging to get the beds, blankets and equipment he needed.  When it caught on fire, he carried out the patients and then went back in for the precious mattresses. As a result, he is also the patron saint of firefighters.

Quite a character, John of God.  A great saint.
Posted by Sister Mary Martha at 1:48 PM

Hi Sister! I'm the husband in question, here. Your St. John of God post had me laughing. I thought I could relate to a guy that just went where life(A.K.A. The Holy Spirit) led him. St. Augustine seems like he had ADD, too, but he also was very academic, which I have trouble with. He's also a very popular saint, so he's probably pretty busy. I liked this article I read about St. Augustine having ADD:
http://filmtraveler.tripod.com/Augustine.htm
It makes sense to me, but I'm glad you recommended St. John of God. I like him.

Hey Lebeau, You've been given good advice(Thanks Sister Martha)John of God patron saint of the sick, nurses and hospitals and be not surprised of booksellers and firefighters. BTW the hospital which went on fire on July 3rd 1549 was the Royal Hospital, Granada where John himself had been incarcerated. If you would like more on this great saint write finnian dot gallagher at s j o g dot i e

thanks for these ideas, my husband is on the fence....or at the door of the Church, knocking.... but hasn't been directly asked by anyone.

Sister,
This is the first time I've seen in print what my mother always said to us children:

"It's gone, honey, gone ... where the woodbine twineth and the wangdoodle mournth." By which, of course, we knew it was gone forever.

I guess a woodbine is a vine of some sort, but what is a wangdoole? And where does that expression come from?

Never mind about what a wangdoodle is. As usual, I've found out more than I ever wanted to know about it.
Best description: a mythical creature who lives in the woods (referred to in some publication from the late 1800's.)

Please Sister, could you and your sisters pray for my daughter Kate. She is in college and is unable to eat and is depressed. I fear she is in danger. She is resistant to my help--am taking her to the health clinic tomorrow. I know that Jesus can do all and I trust in Him.

I know it was a while ago that you posted this, but I just wanted to inform you that I went ahead and chose John of God as my Confirmation Saint. Thank you so much for your recommendation and thanks for all of your continuing insight. You rock!