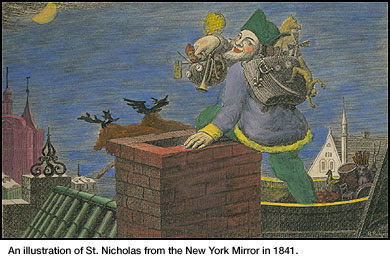 I'm so sorry I wasn't able to give everyone a heads up about yesterday, St. Nicholaus day! I was too busy celebrating.

I am a Christmas maniac. St. Nicholaus day is like the opening kick-off for me.

I come from a long line of Christmas maniacs.

When I was a little girl my mother would put a sheet up over the door of the living room for an entire week. The room was off limits, we lived in the kitchen. It was very, very exciting. In later years we actually watched television in the kitchen during that week! Unheard of!

Why did she brick up the living room? Because Santa was in there! Not every second, but according to her, on and off all week, getting things ready. And boy oh boy on Christmas morning it looked like Santa and his elves had been in there all week.

But before that, on December 6th, weeks before the room was sealed off, in the dusk of evening and never quite when we expected it even though we had waited all day for it, a thundering pounding came on the front door. No matter how fast we ran, we could never catch the elf or St. Nick out there. But there would be a small gift for each of us there in the porch light.

I know there are some sour people out there, who probably love the song "Oh Come, Oh Come Emmanuel", who would argue that children should not be putting their faith in Santa and elves and toys in the moonlight.

To them I say, leave me alone and go sing to your Gregorian Chant records.

Here's what I got out of my maniac Christmas family's shenanigans: they loved us enough to do all that to make a magical time for us.

So as an adult I have to pass that on. Nothing could stop me.

Although...when I was a young nun and had a room full of wiggling seven year olds and I asked them if they weren't excited that it was nearly St. Nicholaus day and got blank stares because the tradition apparently had died out or they weren't all Germans like the people in the town where I grew up, I took it upon myself to give them the thrill.

For several days I mentioned that St. Nick would come and pound on our classroom door on December the 6th and leave a treat for everyone.

On the big day I reminded them several times that at some point we might hear a loud knock on our classroom door and if we ran fast enough maybe we could catch that jolly old elf, St. Nick. There would be candy!

I had procured a box of Tootsie Roll Pops to stick out there. They're so cheery and colorful. There was enough so the children could take some home to their St. Nicholaus deprived siblings (all nine or ten of them). I had arranged for an eighth grade boy leave the box and pound on the door and high tail it out of there. It didn't occur to me that he wouldn't have had to run at all but just stroll nonchalantly by. He probably got a charge out of being able to run in the halls. Just this once.

Anyhow, it all went off without a hitch. I waited until the day was almost over so there wouldn't be candy chaos. We didn't know about sugar highs back then, but we weren't stupid. They can't eat candy in school. If they start eating candy in school what's next? Crack cocaine and New Math, that's what. I would slide St. Nick in just before it was time to say their Act of Contrition before school's end. Maybe we would even skip the Act of Contrition today! We could start with one tomorrow!

So there came the big pounding at the door and I think I said something like, "Oh children! It's St. Nick! Run! Run to catch him!" It took me a second to realize that not only had no one budged, they were sitting there with their eyes like saucers, not in childish wonder, but in mortal terror that if they ran to the door they would see an elf.

It had never occurred to me as a child that if I actually saw the elf that that would be really scary, although it makes perfect sense to me now. If I saw an elf I would be terrified. Really, wouldn't you be? Think about it. Yeesh.

( I don't think I've ever mentioned it here, but I have a fear of the Good Year Blimp and the St. Louis Arch. To me, seeing both of those things are like seeing an elf.)

There they sat. I ran to the door and looked for the elf. The eighth grader had made a clean get away, God love him. The second graders sat firm.

"Look, children! The elf has been here!" I oozed. I thought they could still catch on to some of the magic if they could at least see the box that had been left there by the magical scary person. But I quickly surmised that they were terrified enough that the elf might be lurking in the doorway of the first graders room and jump out at them if they came over to look.

So I dragged the box in. They enjoyed the candy. I hope all the extras they took actually went home to their siblings and not as a stash to keep in their school bags to eat later while they worked on New Math.

I never did that again.

But I do it here and to whomever I can get away with doing it to every year. More on that tomorrow.
Posted by Sister Mary Martha at 10:31 AM

Dear Sister,
I enjoy reading your blog entries and always find food for thought in them. I'm pleased that you enjoy the run up to and christmas, as everyone should, and wholly agree with you on the emmanuel hymn. But my question is this: I thought that our religeon was about praise and love and happiness and good will but in mass all I hear is forgive me this, sin that and damnation, there seems to be no joy in it, why is this? is it always supposed to be about suffering?
jenni, england

I was overjoyed to read your story of St. Nicholaus Day! My mother comes from a huge German family and she and both of my grandparents tell stories of how, as children, they would be praying on their knees in the evening, and there would be a knock and they would run to see what was left. They always got fruit and nuts and maybe a little candy. Unfortunately, we didn't have this tradition in my immediate family, but I love to imagine my grandpa as a little kid, waiting for St Nicholaus to come.

My family did St Nicholaus Day, as my Mom is Greek Orthodox (the rest of us are RC) and assumed all Roman Catholic tradions she heard about were to be followed to the letter, on our behalf.

Sister,
A beautiful story! A wonderful kick off to Christmas!

I love the St. Nicholas tradition and the story AND ALSO love "O Come, O Come Emmanuel". :-) However, I think that artist's rendition of St. Nick is downright terrifying. If that's what the kids were expecting, I wouldn't have gone to see if I could see him either!

(And when I was a munchkin, my cousins and sisters used to tell me they'd just seen Santa's sleigh fly by the window. I ran to see it every time.)

I thought Emmanuel was in the Gregorian style of chant? I think that's what it says at the bottom of the hymnal in church. :)

Anyway, we do St. Nick with the kids here. I never thought about the knock at the door. I may do that next year.

Jenni, It's not all about suffering. you have to listen more carefully. Vatican II worked very hard to make Mass more cheerful.

Dear Sister:
Are you from the St. Louis Area originaly? If so, small world.

Lots of German types, lots of Catholic schools and the ARCH!

We're not of the German persuation, or Irish for that matter, but every year we got a treat on St. Nicks day because it tickled my mother so much to see us check our shoes in the morning. It quite possibly could be the more wholesome, less commercial start to the holidays over the day after Thanksgiving and that whole mess.

BTW I am hoping that either or both my little girls grow up and become nuns. I've already explained the married to Jesus bit as best I could to the seven year old.

God Bless and thanks for the festive St. Nick ideas.