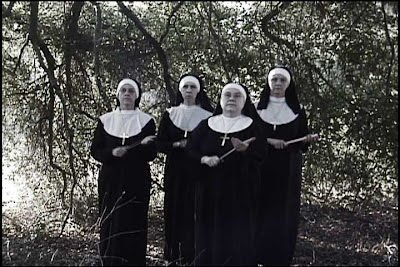 I can tell you (I have told you) that this was certainly not always the case. I'm not the only girl who slunk off to the convent because I felt I had no other prospects. I wasn't the first and I certainly wasn't the last. Galileo, for example, had two daughters. They were both born out of wedlock and so they could never be married. Off they both went to the convent. One took to the religious life like a duck to water, but the other languished the rest of her life in bitter misery.

Lucky for us she went to a cloister and not in front of a roomful of second graders. Because if she had she might have done something like a nun I knew who shall remain nameless. Sister St. John Doe clocked one of her third graders on the head with a pile of hard flat music books in a fit of un-Christlike pique and the child was out cold. Stunned into silence by what they thought was the death of a classmate, she easily lined up the rest of the students to go outside for recess. They each quietly stepped over their fallen comrade on the way out. You would think his parents would have had something to say about it, but the truth is, in those days, if they had found out that he had made the nun so angry that she gave him a music book pile driver that didn't kill him, they would have finished the job at home.

Nuns also used to make things up. Sometimes it was much easier to catch on that Sister had some odd beliefs. I think the nuns who told us that anyone who raises their hand to strike a nun or a priest would have their arms freeze in the arm forever might have been using that old chestnut as a preventative measure. Certainly we figured out that it wasn't true, just like we managed to figure out there is no Santa Claus because one guy could never fly around all night and hit every single house or fit all those toys in his sled or get into my house which was locked up like Fort Knox at night and had no chimney. Certainly there would have been a couple of people walking around with their arms frozen in the air forever. Such was not the case.

But some things were much harder to realize. Right here we had the discussion about whether or not animals go to heaven, for example, and I mentioned that while the Church has no official comment on the matter, every nun who ever taught me said that since animals have no immortal souls they cannot go to heaven. Made sense to me. Not one of them ever mentioned that that might be their own personal (albeit shared) opinion. I have learned to fact check nuns.

Which brings me to today's question from a reader:
Speaking of the Church Militant, Sister. My parish bulletin is listing activities at a "Center for Spiritual Development Center" that is run by a group of nuns (this group is a bit out there on the "ecumenical fringe"). Their lead announcement is about "Zen Meditation."

I wouldn't worry too much about it. You don't even know what they're going to say about 'Zen Meditation'. Perhaps they're going to talk about what the difference is between this popular form of mediation (which involves emptying the mind), and Catholic mediation (which involves filling the mind with thoughts of Jesus). That would be a very helpful seminar.

Speaking of filling your mind with thoughts of Jesus, He was out there on the "ecumenical fringe", back in the day, you may recall.

You better find out about what is actually going on before you try to 'combat' anything, unless you want to go around acting like one of those crazy nuns.
Posted by Sister Mary Martha at 9:29 AM

Every time you refer to your "no dogs in heaven" opinion (!) I am reminded of my own reaction, at the age of 7 or so, to hearing "Whatever you do to the least of my brethren, you do to me." I knew that no *person* could be "less than" I so I assumed that Jesus was telling us to be kind to animals. And I do hope to see all of my dogs and cats in heaven. I think God has lots of room for all.

Well, I hate to tell you this but, I came to understand the fallible nature of nuns at the ripe old age of six years. Yep, my first grade teacher. Sister To-Remain-Nameless, was one of the many, I'm told, who believed that left-handedness was a sign of demonic possession. Being left-handed, I was scared witless by her assertion, not to mention by the quickness with which she snapped her ruler across the top of the knuckles on my left hand. Switching the big fat primer pencil to my right hand, I wondered what possible difference it could make which hand I wrote with. I came to find out later, in second grade when we began to learn how to write in cursive, that handedness had everything to do with the slant of the paper which had everything to do with whether or not the letters were correctly formed which had everything to do with the grade one received in penmanship.

I digress. Well, suffice it to say that Sister To-Remain-Nameless was no match for my mother who was none to pleased about having to be called down to the Mother Superior's office to explain why her six year old could not refrain from crying in class, at lunch, at recess, on the school bus. My mother demanded to know why I cried incessantly. I explained that I was afraid to write in class because Sister hit me on the knuckles, said I was the devil and made me switch hands. Katy bar the door! My mother, God love her, gave both Mother and Sister a lesson on just what was and wasn't cause for either of them to be meting out corporal punishment on any one of her little gifts from God. Left-handedness was definitely not on the list of causes. While I was happy that my mom stuck up for me, I lived in fear and trepidation of my next transgression because, even at six, I figured that Sister would take any and every opportunity to find a cause that was on the list of offenses meriting corporal punishment. Sister surely was convinced that knee socks around one's ankles denoted a malformed conscience. While she refrained from swinging the ruler, my deportment grade reflected her chagrin. Despite my first experience of her, I grew to love Sister TRM, warts and all.

Anon, that was hysterical. We went to public school where the teacher decided my sister should read 'the exorcist' for class. Our mother took that bull by the horns and ended that.

I can remember to this day,one of the nuns telling us, when I was quite old, that if you were not baptised, you were unable to go to heaven because you were, quite literally, "without gills". To breathe the heavenly air, no doubt. The waters of Baptism gave you gills.I cannot bring myself, even now, to look at a fish tank without thinking about her, and it worried me enormously at the time, because so many of my friends and relations were not, in fact, baptised, as they were actually Jewish.......

Now this was back in the 60's; maybe a "watering down" of some aspects of Catholic theology is better than terrifying the life out of my 6-year-old granddaughter.

Sister, there are a number of flourishing orders who are doing great things. Sisters of Mary, Mother of the Eucharist come to mind. Then again, there are quite a few orders who got all tangled up in the 60's and 70's spirituality and haven't quite found their way back to Catholicism. They are the ones sponsoring this sort of conference.

AFter homeschooling 6 children I completely understand why people make up stuff. I get bombarded with so many questions during the day that the temptation to just make up an answer is overwhelming. My current policy is 1. not to answer any questions that I have already answered, 2. not to answer anything they can figure out for themselves somehow, and 3. make them write down the question. They really have to want to know if they are going to bother writing it down, and they have to figure out the spelling on their own.

When Sister told us the "arm story" all the kids started yelling out suggestions. The weird kid wanted to cut it off with a chain saw.
What would be worse? Having a frozen arm from hitting a nun or having your hand burn in hell for hitting your mom?

Monica, great ideas. I've caught myself making things up with my 3 1/2 year old, only to come have it come back to get me later. Like the time I answered "Why are you sick Mommy?" with "Because the sky is blue." (it was morning sickness and I was less patient than usual.) The next day it was raining and she woke up excitedly, "Mommy, you won't be sick today! The sky is not blue!" She was disappointed when I was sick anyway. We might be a few years away from writing it down but I will remember that!

Do you think my first grade teacher Sister_______ was lying about there being an "electric paddle" in the principal's office? She swore the thing had to be plugged in. Now I'm wondering....

Elisa, thanks! when they're little you can always say "ask Daddy when he gets home..." :)

My husband's grandfather was beaten by a nun for writing left-handed. To this day he writes with his right hand and loves to tell the story.

I hope you don't mind spelling/typo corrections. In the third last paragraph you have the word "mediation" twice and I'm pretty sure you mean "meditation". I wish I could blame being irritated by such things on being educated by nuns because then this would be on topic. Unfortunately, I am an adult convert and went to public school.

I spent three years of High School being educated by the Grey Sisters of the Immaculate Conception (most of whom ditched their habits during the years while I was under their tutelage).
The sister who took the tuition payments was quite elderly, and left-handed. This fascinated me as her hand-writing was beautiful, and slanted the same way a right-handed person would do it. I do not know how she managed it, or who taught her how.