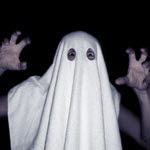 I am all for collecting old linens and making everyone go as ghosts. The little kids only need a pillow case. The whole point of Halloween is the celebration of All Saints Day and All Souls Day. All those people are ghosts, aren't they?

We don't talk much about "ghosts" in the Catholic church, although we understand that the dead have shown up from time to time. That's because you are not allowed to dabble around in trying to conjure them up yourself lest you inadvertently conjure up Beelzebub or one of his pals.

But since we're celebrating those who have passed on and are, or may be, in Heaven and praying for those who are in Purgatory, why not dress up like them? Get a sheet, cut a couple of holes in it, throw on a hat and go as Aunt Sally. I don't see the harm. As long as you don't assume where Aunt Sally has landed in the afterlife, pray for her intercession (unless she's been canonized), or try to conger her, I think she'd make for a good costume.

Maybe it's just wishful thinking on my part, what with me being banned for life from the fabric store.

Which brings me to today's question from Tom in Vegas:

In Christianity, as well as in other non-Catholic/ non-Christian religions, there is much talk about the soul. But what part of me is the soul? Is it in the brain? What part of it continues? And how do we know it does?

This is one of those overlooked discussions that doesn't get that much attention, and is accepted by some without adequate understanding.

I don't know what rock you've been under there in "Vegas", Tom, but that area gets quite a bit of attention, especially that last part, "How do we know it continues?" The answer to that is the difference between you and Christopher Hitchens (I hope). If we don't believe the soul continues, we can toss out the Bible and Jesus and the Catholic Church and the Lutherans and the Muslims and the Baptists and the Church of the Latter Day Saints and their magic underpants. We can even toss out the Buddhists. Good-bye everyone!

We really never STOP talking about the fact that the soul goes on after death. Care of the soul, because it is immortal, is practically our whole topic of discussion.

What part of you is your soul? It's all of you. It doesn't just ride around in your head. If it were just your brain, then if you were brain dead on life support your soul would be gone, wouldn't it? Would your soul just be sitting there in your useless skull? I think not.

Your soul is what gives you life and you have life until your soul takes off for parts unknown. You will go to one of three places, but unless you are canonized (which means you definitely went to Heaven), we won't ever know which one until we join you. It seems that God does allow some departed souls to pay a visit occasionally.

For example, many saints have been visited by souls who were suffering in Purgatory.

You aren't dead until your soul is gone from your body. I think even Christopher Hitchens would go along with that. He must have noticed some type of life force in the living and a lack of one in the dead. If you've ever seen a person die, or a dead body, you understand the difference between the soul being present in the body and the soul having taken off for parts unknown (to us).

All of your soul continues. I'm not sure why you think your soul comes apart at all. It's not made of matter, so there's nothing to come apart.

That's why making a ghost costume is so easy! Now if I can just get Sister St. Aloysius on board.
Posted by Sister Mary Martha at 11:52 AM

Magic underpants? Can we get some for Brittany Spears? Preferably some that 'magically' stay on when ever she goes out in public.

If you've ever seen a person die, or a dead body, you understand the difference between the soul being present in the body and the soul having taken off for parts unknown (to us).

I do understand this completely. When my father passed away in my presence "he" was gone. I felt as though I was alone in the house even with his body there waiting for the undertaker. It's a very unusual feeling to know that someone is gone while their physical body remains. I saw him, yet "he" was not there. His soul left immediately and I pray for his soul and eternal life.

C. Hitchen's books are always a delight! He REALLY makes you think about your own faith, even though you are shocked by much of what he says/implies. Joseph Campbell did the same for me in the 70/80s.

Dear Sister,
Good post and I am really happry to have discovered your blog.
As a protestant I do have one question, why is it so important to keep praying for the deceased? Aren't they either in heaven or not? Does it make any difference whether we pray for them, shouldn't we just leave to God what happens to their souls?
Kind regards and keep up the good work.

Why not shop at JoAnn on line? (www.joann.com) and the halloween stuff is on sale!

The word you want is conjure, Sister, not conger. A conger is a kind of eel, I think.

I have read most of the western tradition (from Plato to Josef Pieper, anyway) on the soul. I still don't totally get it.

The analogy of a metal marked yielding a coin still seems to fail at describing the right relationship of the body and soul.

I guess I'll find out when I die--so I can certainly wait until then.

Thank you, Sister, for the interesting discussion.

Well hello to my new favorite blog...I have questions to ask. Where do I ask? here in comments or how does that work?

Welcome deleferriere! Ask your questions here in the comment section. Sometimes I answer them here and sometimes they become my next topic.

Sister Mary Martha, I do hope you'll keep us posted on the halloween costumes and how you manage without a trip to Joann. I don't watch any daytime drama, so this is my substitute. Please let us know?