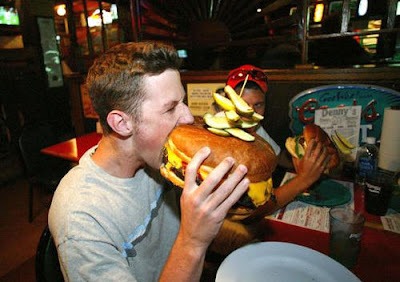 We dust the pews on Saturday mornings. Now for a little blog dusting.

It comes from St. Augustine, who made educated guesses about what we'll be like in heaven based on how Jesus looked and behaved after His resurrection. Jesus ate, but He didn't have to eat. He could knock on the door or He could just show up on the other side of it.

So I suppose you could eat in heaven. But you won't have to eat. You'll have your body. The one you have now ( by the way, a really good impetus to get in shape now, should you keel over tomorrow.) Don't worry if you are old and decrepit. St. Augustine thinks you'll be 35 in heaven, as that is when you are the most physically perfect. None of the things that have to work now will have to work in heaven. Your heart won't have to beat, your digestive system will be out of business. That right there makes me think eating won't be a good plan in heaven.

Here's a scientific, sort of, explanation. 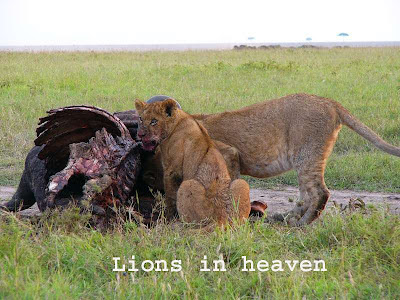 These are all just guesses, though. I think they are good guesses. Go ahead and make a heavenly pig of yourself if you like.

This brings us back to the animals in heaven argument, of which I will never let go. As you know (I hope), I am of the persuasion that animals, who do not possess an immortal soul or the consciousness to choose right from wrong, will not be in heaven. The food situation is just another point in my favor. If you get to have your favorite food, why wouldn't the heavenly lion get to have a nice fat fawn? And what if you want steak in heaven? Is it just pretend steak, like in the Matrix?

Get a grip. Heaven is about being one with God, not sewing circles and cocktails.

would it be legit for me to pray to my sister? Bear with me... She died when she was four and she was mentally handicapped. Before the age of reason + baptism + mental handicap = free pass to heaven, right? So can I ask for her intercession? Or is that not the done thing...

That's not a done thing, even though we believe it is indeed a free pass to heaven. No one's going to stop you. (People are still praying to St. Christopher and St. Philomena and they didn't even exist.) The reason is because, since we really don't know what goes on in heaven exactly, we wait for proof (those pesky miracles) before we go around pestering for intercessions. 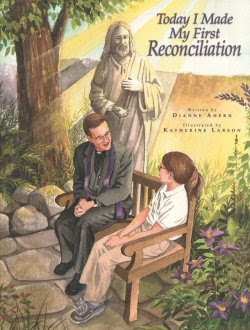 Sister, I have a question about the sacrament of reconciliation. I was baptized last March through the RCIA, so I never needed to go to confession prior. But I now feel the need to do some penance for my sins, but am not sure how to start. I know that the kids in the catholic schools go through some preparation before their first confession. Do I have to do something like that? Is there a big deal about your "first time" - even if you've already been confirmed, etc?

Really? I'm surprised to hear it. I would have thought that you would have gone through all the sacraments in their proper order, just as any young child would, just in a condensed form. What do I know? Not much.

There is no" big deal" about your first confession. I assume you mean is there some type of ceremony involved. No. You just have to examine your conscious and show up. People have all kinds of ways they prepare. They make lists that they take with them sometimes. They go through the Ten Commandments as a guide to see where they may have transgressed. I like this list.

I have shown this list many times with the same response: you can't get through a couple of hours without sinning. Here's more on confession.

PS - Do you have a patron saint/bracelet for teachers? Couldn't find anything on Etsy. Thanks!

I do. St. Thomas Aquinas, patron saint of teachers, students, pencil makers and people who struggle with their weight, is now available.

Hello Sister, would St John of God be a good Saint for me. I am 51 and still have not found 'my way' in life and ministry. I can't be a nun because I am married with 3 children. And I have never seemed to find my 'vocation'.

Yes, you have. It's called "mom". In which case, your patron saint would be St. Ann, mother of Mary. Are your children teenagers? Then it's St. Monica, patron saint of mothers of teens, as she had quite a handful with her son St. Augustine who, before he became a Doctor of the Church, earned himself the patronage of beer drinkers and party animals.

It could be that you just need a hobby you enjoy, in which case I'd go with St. Rose of Lima. Her parents were hoping that she was their ticket to easy street when their gorgeous daughter married a wealthy young man. St. Rose would have had her pick of the lot. Instead, she rubbed pepper in her face to keep the men at bay and moved out into the backyard. She felt bad that she wasn't pulling her weight and was such a financial disappointment to the family, so she made things and sold them around town.

Dear Sr. Mary Martha,
Here is another patron saint match request. My adopted daughter was born deaf and she now has cochlear implants which enable her to hear at some level. We are trying to teach her to speak, but it is a difficult process. How about a patron saint of the deaf or speech impaired?
By the way, do you think it is coincidental that my children have similar behaviors or qualities (not always good) as their patron saints?
Thanks,
Regina

Ha! I totally forgot about that song! I remember when I was a kid (a really slow one, at that), I didn't realize she was spelling "Divorce," and thought she was saying something along the lines of "Do I Vee Eat Horsey Meat."

Sts. Philomena & Christopher didn't exist...? I think you overstepped yourself there, dear Sister. Just because the Novus Ordo calendar dropped 'em, doesn't mean they didn't live. As to animals in heaven... St. Paul remarks about the connection between all creation awaiting the revelation of our Redemption. He wasn't whistling dixie. And as to that quasi scientific explanation of life in heaven, you might do well to drop the link as it leads to some particularly non-Catholic ideas about the necessary means of salvation. Thanks. fr paul

Take a look at this really cute music video about the saints!

Do you have a patron saint for my friend Anne? She is still terribly angry at her exhusband of 20 years and the woman he married 20 years ago. She's livid, not just peeved. She is losing her relationship with her daughter over her attitude, as she wouldn't go to the daughter's wedding since he would be there. He was a pig 20 years ago, but she has to move on at some point. Who can help her with this?

Also, have you ever heard of the Crosiers or St. Odillia? I was at a retreat there last week and it just didn't feel "right".

Thanks for your advice!

Dang... when I was 35 I was pregnant. Not at my physical peak I would say. I wonder if God will allow me to be 21 in Heaven. I looked really good when I was 21.

Dear Sister,
Regarding animals in Heaven; I asked God point blank one day and He told me this;
"I take nothing from you"
After that, I cried tears of gratitude and was simply blown away by the tenderness and caring He gave me that day. I love my pets and just had to know what the deal was as many of my protestant friends said no animals go to Heaven. That's not the God I know! Although, if He decides mosquitoes are not Heavenly material I would be okay with that!
Love you!
Victoria

On the RCIA question, Catechumens (unbaptized people entering the Church)receive all three sacraments of initiation (Baptism, Confirmation, First Eucharist, in that order) at the same liturgy. Since the person in the question was Baptized at the Easter Vigil, there would be no opportunity (or need) to receive Reconciliation before the Eucharist. However, the RCIA director was redress in not providing catechesis and an opportunity to receive the Sacrament of Reconciliation in the following weeks.

You said "we wait for proof (those pesky miracles) before we go around pestering for intercessions."

I understood that before canonization the Church required proof of a miracle that was a result of a petition to a presumed saint.