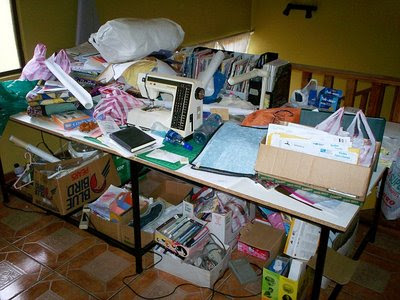 Our yearly dilemma, the sewing of Halloween costumes, is sniffing at our heels. Here's the actual dilemma. Sister St. Aloysius actually loves to sew (although you'd never know that from the sounds that come from the actual sewing area). She doesn't really mind making Halloween costumes. On the other hand, the whole thing can become quite overwhelming ,so she isn't really inclined to stick up a sign on the porch that says, "Need a costume? Just knock!"

However, people who need costumes don't really think about what they might need to do to procure one this soon. The fabric store moratorium begins Oct. 1.

And on top of that, little kids who need costumes, who are the most fun to work for anyhow, will change their little minds four hundred times between now and the night before Halloween. 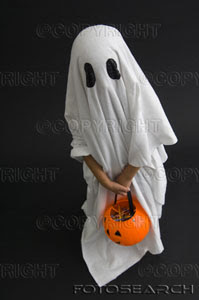 I have made the suggestion that Sister St. Aloysius gather all her fabric scraps and just make a list of costumes she can make available. "Ghost" will be at the top of the list because we have lots of old linen and pillow cases.

She thinks ghost costumes are dangerous because the kid can't see out of the eyeholes and will get hit by a car. I say children are overprotected these days. Who lets their kid trick or treat alone these days anyhow? Those kids don't have to see anything but their candy bag and the door bell.

We could make halos for the ghosts and they could be very generic saints.

I'll admit, I'm squirming. I always end up in the middle of the Halloween costume debacle. Last year was relatively peaceful, even though I had to creep around in that creepy store looking for baby rick rack. 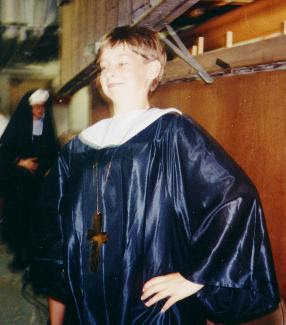 I know! We'll dye all the linens black and everyone can go as nuns! Then we'll take their pictures and enter them in the Nun So Beautiful Non Contest. Even the boys.

A reader suggested that as a title: Nun So Beautiful. Great, huh? nunworld@yahoo.com
Posted by Sister Mary Martha at 12:22 PM

'Nun So Beautiful' - it was me!! Wow !! I'm so chuffed (=pleased). I'm waving all the way from the UK to California!! I was taught to sew by a lovely sister although have unfortunately lost touch and don't have a photo to send - looking forward to seeing piccies from others.

All the very best to you, Sister St Aloysius and Sister Mary Fiacre.

I SO loved another reader's suggestion of Nun So Beautiful, for the non-contest. And I'm SO glad you think so, too.

Reminds me of our All Saints Day party last year...a mom with 5 young kids, pressed for time, brought all her gang in their street clothes and said they were "The Church Militant". :)

I love the name too! I wish I could come down and help you sew. I'm probably only an hour or so away, so if you get desparate let me know!

Do you do them for the school kids? How do you get roped into this?

My trick is to purchase the halloween costumes on sale the day after halloween, and the following year I give them a few choices. Or else we do really fun things like get those mini cereal boxes and pin them to the child with a plastic knife sticking out of each one(cereal killer)(this is great if recommended by a nun, I'm sure) or tape smarties candies all over their bottom half so they can be 'smarty pants'. Family fun mag online has great suggestions.

I love the ghost / generic saint idea! You could think about Halloween costumes that can be converted to All saints Day costumes the next day. You know mummy / Lazarus, Indian princess / Bl. Kateri, Carpenter / St. Joseph, etc.

I love Halloween. My kids are older now so our costumes are for the drama club haunted house. We do our best to scare people. We had a lady actually pee her pants one year. Served her right as she is a practising wiccan.
My favorite was the year when a little girl from my church came out scared silly. I was looking hideous and was using a 'witch' voice. I switched to my normal voice to explain it was all pretend. I ended with "I'll see you in church tomorrow."
The next morning I made sure to sit near enough to her so when it came time for the sign of peace I shook her hand and used my 'witch' voice to say "Did you have a nice time last night, dearie?"
Her expression was priceless as she realised it had been me the night before. It certainly gave her peace of mind to seperate the reality from the make believe.

I once wore a brown trash bag with "Hershey" in white letters taped to it and had an aluminum foil hershey's kiss twisted hat. It was quick, inexpensive and required no sewing!

I dressed my son one year as a bag of dirty laundry. I cut a hole in the bottom of a laundry basket so he could slip in on over his head. I took laundry line and tied it to both handles to make a loop around his shoulders/neck to hold up the basket. Then I tossed clothes into the basket, added a small box of detergent, and he was good to go.

He won a "best costume" award for it, and it was the easiest costume I ever made! :)

I really love the way you are thinking about Halloween costumes.