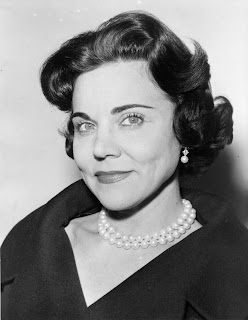 There was a reason Ann Landers had a daily column in major newspapers across the country for so many years. She was really good at her job. Me? Not so much.
It seems I gave my reader the wrong patron saint the other day.
Although, now that I think about it, good old Ann Landers sometimes gave someone a bum steer and her readers would read her the riot act. She would sometimes change her point of view. So, maybe I'm not a total disaster.
Our little computer girl has clarified her issues:
Thanks, Sister, and everyone in the comments with suggestions.

To clarify, by "creepy" I mean a couple of things: 1) not realizing the "personal space" thing or that I can tell that they're not looking at my face or the code on my laptop, but areas in between, and 2) not realizing that making a lot of sexual jokes (in general, not about me, or I'd have done something serious about it) and mentioning things like "if they run out of hard drive space, deleting their porn will be a last resort" do say things about their character and creep me out. Neither sort of behavior started until I tried to befriend them earlier in the year (not within earshot for the second one, anyway)...

At first when it was just the space/turning up often issues I did think of Asperger's, but wasn't too sure because some of my friends have it in varying degrees and are generally pretty good with personal space and such. Then the other issues started.
Oh, dear. My ears are burning. 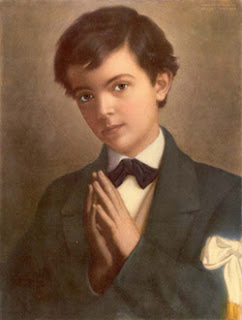 I have a new patron saint for you! St. Dominic Savio! He only lived to be 17 years old, but he spent his whole life admonishing sinners and being humble. Some reports say that he was popular with the other boys at school. Some reports...not so much.
I can understand that he may have gotten on some people's nerves. When I was in grade school myself, we had a boy rather like Dominic in our classroom and he got on everyone's nerves. He got straight "A's". He never so much as talked in class. He sat up straight and cleaned his plate and bowed his head in fervent prayer.
I'm surprised he survived past the sixth grade.
If someone else talked in class, he would press his finger to his lips, but not make a "shushing" sound, because that would have been making a sound in class and defeated the whole purpose of the finger to the lips bit. Once, in the eighth grade, he finally got a 98% instead of 100% on his work and he burst into tears.
I'm pretty sure he became a priest. I'm not sure he stayed.
I digress. 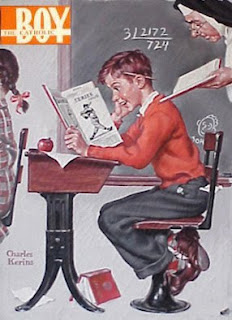 Back to St. Dominic! Once, out on the playground, some boys were passing around a filthy magazine and laughing and carrying on. Dominic came over to see what the fuss was about when he got a load of what was going on he was horrified. He grabbed the magazine and ripped it apart.
And he said this:
"What are you thinking of? God has given you eyes that you may admire the beauty of His works; and you are using, or rather abusing, them to look at these abominations. Have you forgotten what so often Our Lord says: that a single harmful look can soil our souls? And here you are feasting your eyes on that filth!"

"A fine joke you'll think it when you're burning in Hell!"

I couldn't have said it better myself. I might have said something like, "You won't be laughing when you're burning in Hell." I've said that many times, over the years.

"I didn't see any such great harm in them," protested another.

"So much the worse. Not to see any harm in those horrors, argues that your eyes are used to such sights and such an avowal makes your sin greater. Do you not know that the holy patriarch Job, though old and infirm, declared that he had made a contract with his eyes, that they should never rest on anything but that which was chaste and holy?"

Good old Job. He didn't have an easy time of it. 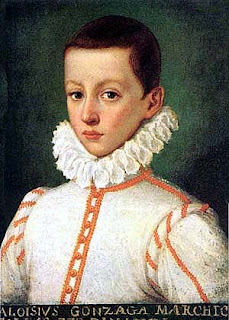 Too bad you can't get them interested in St. Aloysius, another youthful saint. He wouldn't look at girls at all, even when they were standing right in front of him. He definitely would have kept his eyes on his own laptop.

Well, well.
An' what of St. Thomas Aquinas? Ain't he the one wif' Angelic grace enough to push a "temptress" out of his room wif' a hot poker?


One thang we can sure say is that mortification in Lent is a good means of toughening up for the rigors of this world's temptations. Yore correspondent might try offerin' some mortification tips to her lookers/ suitors. I'se big on mortifications, though in the more modern form. Jes' a thought.

I have sure had a good laugh readin' yore blog, Sister. Doan reckon ya knowed the sisters I had in grade school, (ain't sure of yore age) but counter to all that seems to be noted in the blogosphere, I had terrific sisters (RSMs) . Iffin' you ain't really one, you'd been a good one. TOO much sympathy ain't good fer the soul, as ya know.

P.S. I found ya' Sister Mary Martha on account of yore post wif' Aloysius. I think I'se been here before, but I jestingly call mah other half Aloysius. He doan always git mah humor, though.

I need help finding two saints. My little boy died in August 2009 after a horrible accident at home. He was 2 years, 7 months and 1 day old. I miss him desperately and I have to go to heaven when I die. I have a bad habit, though. When I hear gossip, I join in. Sometimes I'll even start the trouble. I continuously tell this sin in confession and promise not to do it again but it keeps happening. It's habit I must break. Please recommend someone for me. Also my daughter, 11, has really struggled with faith, religion, and God since Angel died. I pray for her and ask St Maria Goretti to pray for her. I'm so worried I'm going to lose her to the world. She won't pray with me, fights about going to communion and religious ed classes, etc. I don't want her to end up in hell. Please help me.

Sister, I have a terrible question. I recently encountered a priest who is not from my parish, thank God, as he is one of the most attractive and charismatic men I've ever laid eyes on. I am amused and mortified by my brief confusion, and grateful that respect -- for God, the priest, his vocation, and my own self -- won out over whatever else was going on there. I'm grateful to God for placing that priest in my path, then petulant that He called a man like that to the priesthood, and then again, grateful to see such a lovely person prominent and guiding others in faith. The short contact wrested me back to the innocence or humility of my Catholic childhood and restored my wish to return more actively to the Church -- for good reasons, not because I'm looking for another hot priest! But in case I encounter another one, please advise, patron saint or prayer against wanton thoughts or whichever. I wish my grandmother were alive to have this discussion with, because I am surprised to face a man of the cloth who is my own age, physically appealing, and obviously not a commitmentphobe. For some reason I guess I thought that priests are always old and apparently sexless and therefore not tempting. I'm sorry if this all seems very disrespectful; I ask in seriousness.

Kathleen, I am praying for you and your children. What a hard and terrible hurt you've suffered. I don't even know what to say, except that I will pray and pray and pray for you today.