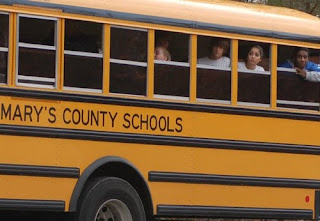 Can you please do a detailed post on Divine Mercy Sunday? My father is under the impression that his "slate" is wiped clean on that day after attending Mass and if he were hit by a bus walking out the church doors he would go immediately to Heaven.

Wait, I think there's also something about attending Mass for the next seven Sundays or something like that.

I have a hard time believing a person can stand on his left leg, jump three times on three consecutive Sundays and then be granted immediate entrance to Heaven.

Please clarify. Thank you in advance.
I am thrilled that you asked!
Your father is more correct than you might imagine. That's part of the reason I was pleased to point out that next Sunday is Divine Mercy Sunday. Now for those details. How we love details! 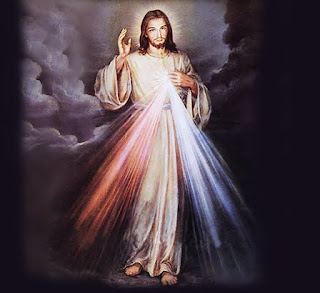 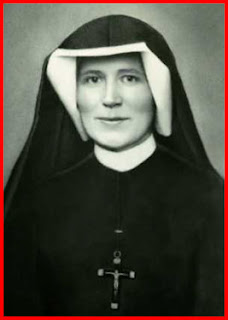 First, let's start with the part where your father is right. Check out the name of this feast day: DIVINE MERCY. This feast is a shout out to the worst sinners and regular old sinners alike that God's Mercy is boundless. That means without boundaries.
God will forgive anyone for anything as long as the person is truly sorry for their mistake, even if 'mistake' is just euphemism for heinous crime, debauchery or mayhem. This is God's mercy, not ours. It's what Jesus came to tell us about, which is why the Pope stuck it onto the second Sunday after Easter. God's Divine Mercy rather sums up just about everything Jesus wanted you to know.

Jesus appeared to a nun named Sister Faustina, and told her all about God's Divine Mercy. He sent an angel to take her on a tour of hell so that she could be very specific when she talked about what people might avoid by seeking God's Mercy. Then he gave her a plan, and a nice portrait of Himself, to guide people to receiving God' Mercy.
So, your father is absolutely correct that by participating in the second Sunday of Easter devotion to Divine Mercy, he could walk out of church, get hit by a bus and go straight to heaven.
So....let's talk about two more things:
1. What it means to participate.
2. What is a plenary indulgence.
PARTICIPATION: Your father can't just skip to my Lou into church on Sunday and skip back out and expect to get a plenary indulgence. He'll have to also go to confession, receive Holy Communion, pray for the Pope and stay sin free until the bus hits him. He'd better jolly well go to Mass for the next umpteen Sundays and every Sunday after that, because if you are an able bodied person, it's a mortal sin to miss Mass on Sunday.
PLENARY INDULGENCE: People have a major problem with the idea of indulgences. I think that a lot of people don't know what they are. At all.
Once you confess your sins and are forgiven, you still have to pay the piper and be punished for your sin. An indulgence is a pass on the punishment portion of sins
At the risk of dredging up the complaints of Martin Luther, I will make an analogy. You go to the hospital very sick, they do all kinds of things to you to make you better and you actually get well.
That would be the confession part.
But now you have a big fat hospital bill to pay. The sicker you were, the bigger the bill.
That's the punishment for sin part.
Now suppose the hospital waived your bill, or part of your bill.
If they waived part of the bill, that would be an indulgence. If they waived the whole thing, that would be a plenary indulgence. A complete waive of the punishment due for your sins that you just confessed (and one's you forgot to confess as long as you actually forgot and didn't "forget").
A plenary indulgence is what you get for your participation in the Divine Mercy devotion next Sunday. That means you actually have work to do. You have to go to confession. You have to have no sin in your heart. You have to go to Holy Communion. You have to pray for the Pope. And the indulgence, even the plenary indulgence, is only good until you sin again. Going with our hospital analogy, you got sick, got well in the hospital, the hospital waived the whole bill and then....you get sick again. Maybe you have the same illness, maybe you have something new, maybe it's just a little glitch, a slight complication, but how you're sick again. AND even after you're well again, you're going to have to deal with a new bill.
That means that your father could being walking out of church, have a sinful thought about Mrs. Sheffield lumbering out the door in front of him and when the bus hits him there at the curb, he will find himself in Purgatory with a bill to pay. Let's hope he doesn't manage to commit a mortal sin on the way out the door or he will be doing more than touring Hell.
I hope the news that your father is on the right track doesn't upset you too much. Perhaps reading through this old post from a while back will ease your mind.
Posted by Sister Mary Martha at 9:27 AM

Sister, does that mean that one mortal sin would send me to hell forever? Yipe!

Sister, thank you! This is the best explanation of plenary indulgences that I've ever come across. I'm going to bring a copy of your post to our Bible study group so that they can read it too, because we've tried before to discuss indulgences and never gotten very far. Thank You!

Sister, great post. Thanks. I guess I'll have to pull out my copy of Divine Mercy now and actually read it.

What does a blessing add to rosary beads? A friend prayed the rosary using his fingers. I knew his prayers were still efficacious. But it made me wonder, why the blessing?

The above comment prompts me to ask, what if you're truly sorry for your mortal sin just before being hit by the bus (or just after, for that matter, the split second before dying). Will it be held against you didn't make it to confession, or are you allowed to skip the middle man in this case?
This is all very disheartening really as I rarely make it through mass without having a sinful thought about "Mrs. Sheffield lumbering out the door".

Sister by pay the piper you mean pay not for the sin which is forgiven but pay for the consequences of that sin. which is why we make reparation and take on acts of humiliation and self denial right. like do the time here instead of in purgatory.

not so much a question but more a request for advice.
i will be making my first confession very soon and i wanted to know if you had any advice for going to confession. What to expect? Do I need to say the number of times i have committed a certain sin? how do i confess 20 plus years of sin?

If you regularly go to Mass on Saturdays because of your work schedule or something, do you just have to miss out on the Divine Mercy Sunday thing? or does the Saturday one count?
I'm one of the separated sisterns and am still trying to figure all this out!

Way to come through with the explanation, Sister! Thank you for all of the information; I do like to truffle through the details so this was very helpful.

If I'm going to be honest, the news that my father is on the right track *is* annoying but I'm working on that.

And I did make it to Mass yesterday so I'm on the right track, as well! Now excuse me while I head into confession.

The thing that gets us to heaven is Jesus believing one Him and him crusified, risen to life.

He is alive today, in our hearts.

Read the Bible for your self and see how great it is. I promise you, you want regret it.