Nose to the Grind Stone, Chin to the Chest 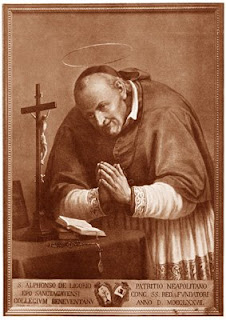 We have a busy weekend ahead, but I wanted to quickly close out our patron saint matching week with a little saintly pain pill and we can talk a little more about it later today.  I hope.

Is there a patron saint for those of us who are suffering from arthritis?


Is your arthritis so bad that your head is bent down to where your chin is pushing into your chest so badly that you actually wear a hole in your chest?  St. Alphonsus understands.

Oh sister! I know this isn't relevant to this post but I didn't know where else to ask. I go to a Catholic high school and we have a monthy school mass, which is a good thing except that the eucharist is profained. At every mass our priest says only practicing Catholics in a state of grace may recieve and every time we have non-Catholics and others reciveing unworthily even putting the eucharist un their pocket. I have a jewish friend who did this and I explaind that it's wrong but she said that her parents tell he she must recieve and that she plans to do so at the next mass. What can I do? Is there any one i can pray to for understanding?

When you only have Mass once a MONTH, the priest giving out Holy Communion probably doesn't recognize who is Catholic and who is not. He feels he is doing his duty by stating that only practicing Catholics in the state of grace may receive, and he's off the hook. Not so fast. He has SEVERAL options, and they CAN be done. It is working at my school.
1. Get to know all the students. Know who your Catholics are, know who your non-Catholics are.
2. Remind them that all are welcome to come forward; those not receiving just place their arms across their chest and receive a blessing.
3. Have the teachers keep an eye out for who is receiving.
4. Have Mass more often.

Regarding #4, I put this one on the bishops. Why do they allow a school to call itself Catholic and then have such blatant disregard for the Holy Sacrifice of the Mass? Are they THAT fearful that Sunday Mass attendance will drop, if students 'have' to go to Mass more than once a week?

Our school has:
DAILY MASS
The priest/deacon KNOW THE STUDENTS
The teachers WATCH that the non-Catholics cross their arms and receive a blessing

It's not rocket science, just good old fashioned common sense mixed with a little effort. After all, we are talking about the Word Made Flesh. We are not distributing wafers and juice! This is how we got to the condition we are in, with 80% or more Catholics practicing contraception, 60% or more identifying with Pro-Choice politicians, 3 out of 5 Catholic marriages ending in divorce, 2 out of 5 teen pregnancies are products of at least one Catholic, etc.

Thank you for telling us about St. Alphonsus.
Today Brother Andre from Montreal was cannonized by Pope Benedict XVI. He is the first male saint born in Canada. He was known as a humble man that comforted the sick, but claimed that all the healings that occurred were from St. Joseph.

I was just wondering if there was a patron saint for childhood epilepsy. I know a child who struggles with epilepsy and could use a special friend. Thanks!