A Match Made in Heaven

Let's see...
I am a wife and mother. I have 4 children now (we recently received custody of my sons 14 yr old lifetime friend!)

A little over a year ago I left my dream job (along with the paycheck, insurance and 401k) due to a sudden and crushing bout with Anxiety and Panic disorder.

I love children and I love animals. I cannot bare to see them hurt, hungry or mistreated.

I love to read and regularly do book reviews for various publishers.

I still feel like I don't know what the heck I am doing spiritually but I do know that the Catholic Church is where my heart is.

Other than that, my bio says that I am a self proclaimed small town girl, I can wire a three way switch, find a leak in a radiator, wire a phone line but still cry at a sappy movie and take in stray kitties :-) 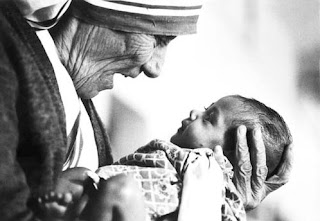 I think I have the perfect saint. The problem is she's not officially a saint yet. I feel a bit remiss in not knowing if it's okay to use a "Blessed" person.  Not to worry, there is a loophole!

I believe I'd go with Mother Teresa of Calcutta! I'm sure she'll be canonized any second.

Look at all you have in common with her!  You gather up children who you love and care for them.  She couldn't bear to see them hurt or mistreated either, so she did everything she could think of to make sure that did not happen.  I'll bet she knew how to change a tire, too.

But she suffered most of her life in Calcutta, the life for which she is famous, with crushing doubt and anxiety.  Mother Teresa had what is known as the "dark night of the soul", in which one is tormented with the feeling that God has abandoned them.  Except in her case, it wasn't a dark night.  It was a dark decade or two or three, a dark era, a dark adulthood.

Mother Teresa got a message from Jesus one day while riding a train in Europe.  He told her to go do what she did in Calcutta.  Then, according to her, He never spoke to her again. 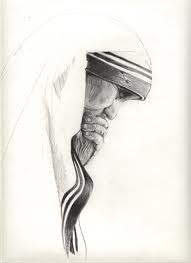 She felt abandoned, and felt that way for almost the rest of her life.  She did it anyway. Did what was asked of her.

It's odd that she felt abandoned, looking at it from the outside.  For example, once she had a bus that was going to pick up a whole busload of children, but before they could go get the children, fighting broke out.  By fighting, I mean gunfire and explosives. So everyone told her she couldn't go in there.

She went anyway, while everyone bit their nails and fretted for her and the children.  They came through untouched.

Still, she felt that way.  On top of feeling abandoned, she could never understand why. Wasn't she doing everything that was asked of her to the top of her ability every second of her life? It wasn't until the very end of her life that a spiritual advisor pointed out to her that one of the gifts Jesus brings is sharing in His suffering and that people who receive, say, the Stigmata, are suffering with Him in a very specific way.  He suggested to her that she had lived her live in "the Agony in the Garden", in which Jesus is left alone by His sleepy disciples in His greatest hour of need.

That snapped her out of it. She was overjoyed with this gift.

So imagine that!  You and Mother Teresa, struggling to be the best person you can be and to find Jesus everywhere and do everything He asks and all the while feeling full of doubt and anxiety.  But...you both do it anyway.

She'll be a saint any second, I'm sure.  And there are saints who spell their name that way, as opposed to Therese and Theresa, so no one will bother you about it.
Posted by Sister Mary Martha at 11:20 AM

Actually Teresa (of Ávila fame) is spelled without the "H", Sister...

That's exactly the saint I was thinking about when I wrote this.

Dear Sister, nice to see u writing about Mother, as I am an Indian. Calcutta has been renamed to Kolkata, but still Mother is associated with old name only. And a humble suggestion, if i'm right, He spoke to her on a train from Calcutta to Darjeeling(a hill station in India), not Europe. Her frustration as an Indian, I guess might be due to the people who accused her of converting hindus to Christianity. Though she was an angel at many people's life, she felt she had none...

As well I hope you answer my doubt sister, thanks!

Dear Sister,
Do you have a patron saint for a woman (me) who was told years ago that she can't have children, but desperately wants children? I already checked your etsy shop.
I was told I'd need invitro to conceive. I know that the Church doesn't allow for it and why. I just want my miracle. Can you match me up sister? Thank you.
Love,
Helen

That's St. Rita, Helen, the patron saint of help getting pregant, although I don't know why. She certainly was told that she couldn't have what she wanted, which was to become a nun, over and over and over again until the angels came and picked her up and flew her over the convent wall.

Thank you for all of your time with this Sister! I think Mother Teresa and I would've gotten along nicely (although we might not have been happy about it! lol since misery loves company!)

P.S. my middle name is Theresa

Helen, Try St Gianna Beretta Molla. I recently venerated her relics and she is great for anything related to pregnancy. Check out her website
http://www.saintgianna.org/
She was a great woman. Very modern saint :)

I received the go ahead last night! Mother Teresa of Calcutta it is!

Thank you all for your help!
Julia

For fertility issues, you may wish to consult the Pope Paul VI Institute http://www.popepaulvi.com/about.htm . Dr. Hilgers works within Catholic guidelines and has had quite good success in helping couples with fertility issues.

Hello Sister,
(if indeed you are Sister)...sorry, been on google too much this weekend and come accross all sorts of sites by mistake, one of which leads to my question. Jesus said not to use repetitive prayers as the heathens do which has lead to criticism of the rosary by non-Catholics. To be fair, it is quite repetitive, so how do we answer this to the critics?