The hand holding, clapping war rages on in the comments section.  Who knew such a simple question would start such a donnybrook.  Sister St. Aloysius' worry of a future war in Heaven is not unfounded!  Time for a little palette cleanser:


My fiance has just moved from his home country of England to start a new life together in America. He is suffering from culture shock. Is there a patron saint who helps in a situation like this?

My goodness! Isn't that lovely? The poor man.  America is a very hard place to get used to, I would imagine.  Although, the food is a lot better!  Where in America has he landed, I wonder?  Because I get culture shock going from here on the West Coast to the Midwest. 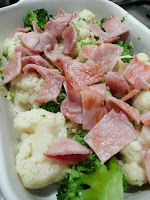 I have a terrifically hard time finding any food that includes vegetables, for one thing, although I suppose technically speaking, potatoes are  vegetables, as is the tomato on the hamburger. You'd better be a big fan of iceberg lettuce, too. Your salad will have ham on it, if it isn't made up almost entirely of ham. You can't even find ham salad here anywhere. A request for ham salad would solicit blank stares.


And when you actually do find some vegetables, something untoward has been done to them. They have bacon bits on them, or cheese.  Not real cheese, either. Cheeze Whiz or Velvetta.


Yes, of course we have a patron saint for him! We have a whole bunch of saints for him! I'd go with the North American Martyrs! Talk about culture shock!  Since I've covered them before, I'll just redirect you there. But I do want to highlight the fact that these men were shocked and horrified whilst having to live among the heathens and were beaten and chewed  trying to do their work here. 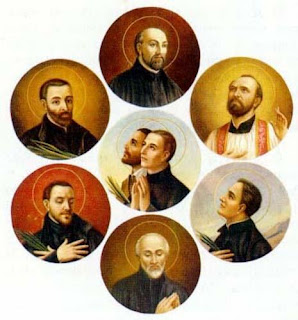 That would be much worse than broccoli with bacon bits and Velvetta.


Which brings me back to the hand holding wars.  The North American Martyrs should add a little perspective to our thoughts.
Posted by Sister Mary Martha at 12:04 PM

Dear Sister,
I have a question for you that you might find strange, but I really am serious.

I really enjoy documentaries and have been watching quite a few in these winter months. I've seen a number of them about the origins of our species, Homo sapiens.

I'm fascinated with the research that is being done in regard to our evolutionary cousins who share our genus, Homo. Such as Homo floresiensis, Homo habilis, and Homo neanderthalensis. It's so interesting to me to learn about how their lives might have been.

My question: Do you think these close relations to our species had souls? I know this is a big weird question, so I guess I'm just asking for your opinion, but I've been rolling it around in my head for a few days now, and wonder what others might think.

What an interesting blog you have. I was charmed by your writing, delighted by choice of medals and captivated by the handsome beauty of Xander.

In the mid 1970's my husband and I were transferred to Asia due to his work. That was a REAL culture shock.

You should come a little further East because we have a better variety of lettuce in PA and lots of other vegetables.

Dear Bethany,
Pardon butting in on the conversation, but I would answer your question another way. The scientists have labeled Homo sapiens a person, and Homo floresiensis a pre-person. Thus your question about souls. I think that I don't trust their labels. I think that it is entirely possible that all the Homo etcetera were people, and had souls. We certainly have all different formats of homo sapiens in the world today, from very small people in central Africa to very tall people that play basketball.

All living things have souls - plants and animals (anima=soul). Soul just means "principle of life", what it is that makes a living thing alive.

An animal does everything a plant does, and some more things, so its soul includes everything that a plant's soul does, plus it has capabalities a plant's soul doesn't. A human's soul has all the capabilities of an animal's soul, plus something else - rationality. Our souls "enliven" our bodies, but there are some properties of our souls that are not dependent on the use of an organ the way eating, drinking, instinctual behaviours, and so on, are. Because of this our souls can exist without our bodies - they are immortal, whereas animal souls are not, because everything an animal soul does is bound up with the animal's body.

Though if there are going to be trees and so on and so forth in the New Jerusalem, I suppose there will be animals too. Just not actually the same ones, even if absolutely identical in every other respect to Tiddles and Bimbo.

I like Berenike's answer and would just like to say to SMM - Sugar you haven't eaten at the right places when you travel away from California. There are many, many wonderful places to eat, and enjoy. Keep trying and you will find them. Next time you venture out of state let your readers know and one of us can direct you to a nice place where you are traveling to.
You have a beautiful and very enlightening blog. God Bless,
Offer it up!

Hello, I stumbled here doing a bit of research for a paper, but became intrigued by the conversation. I am not at all religious, I blame my parents (if there is an blame to be placed, that is) because we rarely went to church, but am fascinated with such thoughts and ideas as the true origin of our species and its features..

Back to the main point of the blog (I might as well contribute, perhaps provide a unique perspective). I feel rather unfortunate for not having been in a place other than Spring, (Southeast, just North of Houston)Texas for long enough to have truly experienced culture shock. Sure I have been on vacations to several states within the U.S. (mostly road-trips, only spending a few days or so in many of them). I find my situation unfortunate because I feel that it is important to have as many experiences as we can during our lives, and to be having so extreme an experience as to be truly culturally shocked would be the success of such an undertaking.

The first thing I would suggest would be to ensure strong, healthy communication; It is one of the most important aspects of a relationship, especially for someone in such a fragile state.

Aaron said...
This comment has been removed by the author.
11:57 PM