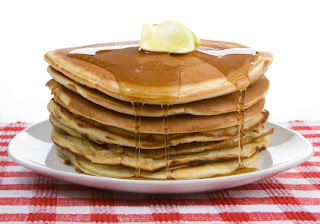 Well this is it! Here's hoping you have your Lenten ducks in a row, picked something to give up, cleaned out the pantry, dusted off the fasting rules, located your glow in the dark rosary and have at least considered getting a Lenten wreath to mark the time.

You'll like having the wreath, because you get that one day off on your pink candle Sunday, and you'll be able to see it coming up and have a beer or a piece of chocolate on that day.  Many people ask me if it's okay to have whatever you're giving up for Lent on Laetare Sunday, and my actual answer is: Jesus didn't take any time off during His Passion.  But then, His Passion only lasted for one really long gruesome day, and you've (we hope) been at it for weeks.  Still, giving up the internet is no crown of thorns.

On the one hand, it makes sense to have a little treat on the fourth Sunday of Lent. The gospel reading for that day used to be the story of the miracle of the loaves and fishes. But...now it's the story about how Jesus gets in a tiff with the powers that be for healing a blind man on the Sabbath.  Hmmmmm.

It's going to be up to you to make the call.

I also am aware that I will be saying good-bye to some of you for a bit.  Perhaps we should say "Adieu".  Again, I don't speak French, but doesn't that mean "til we meet again"?  Giving up the internet, or at least, surfing around reading blogs and lolling on recipes sites and Facebook is a very common (and worthy) thing to give up for Lent.

So Adieu, internet giver uppers!  We'll so look forward to seeing you again on Easter!

1. You have to walk around.
You can't just sit in your pew and slide your eyes over the Stations hanging there on the wall.

2. Say an Act of Contrition before you start.

3. Don't get confused if the little booklet you have of the Way of the Cross is different that what is hanging on the wall of your church, because chances are, if your booklet is new and your Church is old, what's on the wall is all off. 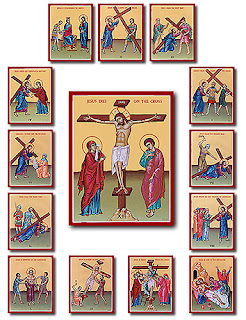 There are two sets of the Stations of the Cross.  The 14 Traditional ones:

Quite a difference, eh?

I feel bad for the old churches like my childhood parish which has statues and stations that are very, very old.  The Stations match the statues and are in relief.  They were still there on my last visit, just as they have always been, with Veronica more or less in the middle.  The reason we got the modern version is because someone finally noticed that there are things in the original Stations of the Cross that are not in the New Testament. File this with the names of Mary's parents, Joachim and Ann, also not in the New Testament.

In the Traditional Stations, #3,4, 6, 7 and 9 are not incidents that appear in Scripture and #13 is embellished a little, with the Scripture saying that Jesus was taken down from the cross. Jesus being laid in the arms of His Mother is not mentioned.  It could have happened.  But we don't really know that it did.  Bad news for Michangelo. 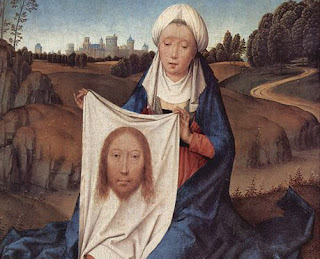 My favorite non New Testament Station is number six, "Veronica wipes the face of Jesus".  This one really has legs.  It is a late bloomer to the Stations in the first place, not arriving until the Middle Ages, along with, and probably not coincidentally, the Shroud of Turin.  There was no woman named Veronica who wiped the face of Jesus.  The name refers to what happened, "Vera"= True, "Icon"=image or mark.  Vera-icon. Veronica.

Ann and Joachim.   If we're just going by the New Testament, we don't know the names of Mary's parents and no one stepped forward to wipe the face of Jesus and walked away with His face on their towel.  But Mary did have parents and we do have the Shroud of Turin, although the Shroud of Turin is not Veronica's towel.  They do seem to be cut from the same cloth.

Pope John Paul II began the Scriptural Stations of the Cross and Pope Benedict XVI has made it official.

We hope the possible confusion doesn't deter you from making the Stations of the Cross at least once during the Lenten season. How about tomorrow?  That might be just the ticket to get your brain around what Lent is really all about.

I think today is Saint John of God (at least that what my google calendar is telling me!) Maybe this joke is lost on me?

Thank you for this post sister. I look forward to visiting the stations this year.

You're quite right - wasting time online is an insidiously selfish indulgence, and I will cease forthwith.
I don't know what is going to be harder - switching off , or NOT buying all those knitting magazines.......
Anon.

Good Lent, Sister. The French phrase that means "See you again" is "au revoir." (Literally, "until to re-see" or "until the re-seeing.") But "adieu" means "to God," or "with God," so that's fitting, as well. Because your website will not be part of my Lenten sacrifice, from me to you, it's au revoir.

Adieu means, literally, "to God." As does "Adios" (Spanish).Just as "Goodbye" is a conflation of "God be with you."

If you want to say something akin to "until we meet again," try Auf Wiedersehen (German).

Latin: "vale" and its derivations, including such things as valediction, which indicate "to be strong" or "to be well."

Which leads to the secular and literal "farewell."

Fasting on a Sunday? I don't think the Church actually asks us to do that - not even during Lent. Solemnities that fall during Lent are also days off. That being said, I'm sure there's more merit in sacrificing straight through from Ash Wednesday to Holy Saturday. But there's no sin/harm/foul if you just observe the 40 days (as opposed to 46).

I looked this up in Canon Law, and Can. 1253 states: "The conference of bishops can determine more precisely the observance of fast and abstinence as well as substitute other forms of penance, especially works of charity and exercises of piety, in whole or in part, for abstinence and fast."
So, I looked up the USCCB (for those of us in America). Here is the link - but I sure couldn't find a statement saying whether or not Sundays are included in the count.
http://www.usccb.org/lent/index.shtml

Finally, I did find this source that has an interesting addendum which I have cut and pasted here.(You are encouraged to use the link to see for yourself)
http://www.sgroi.com/catholic/lent.html

ADDENDUM: Some people mistakenly think that the "40 days of Lent" include the Sundays. Were we to count from Ash Wednesday, including each Sunday, we would find that the 40th day would fall on Palm Sunday! But this is not so.

The Sundays are undeniably part of the Lenten season, but they are not part of the penitential 40 days of Lent. Sunday is a Holy Day of Obligation; the Day of Rest; the Lord's Day. Catholics have never been obliged to fast on such days. When we count from Ash Wednesday and EXCLUDE all Sundays, we find that the 40th day is Holy Saturday, the day before Our Lord's resurrection, as it should be. The 40 days of penance and mortification are fulfilled without being contiguous.

I am one of the weak ones, so I'll be doing my penance in 6 day sets with Sundays off.

That was interesting information about the Stations of the Cross. The new Stations do represent important events leading up to the Crucifiction.

I do have a saint question; I ran across the name St. Blybig in a book. I have not been able to find any information about him/her. Can you help?

Our parish still uses the Stations which are on the wall - the traditional ones - when we pray the Stations together on Fridays during Lent. On Good Friday, we have a Choral Stations of the Cross, with a meditation on each Station and music which corresponds to that Station. For that we use the "modern" version. It works for us!