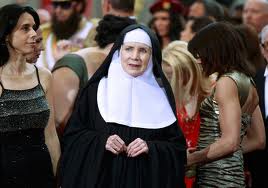 I am one confused nun.  Perhaps you, dear readers, can talk me through it.  Someone called us last evening to breathlessly announce that there was a nun on the Oscar red carpet! I thought they were joking. As far as I know, there has never been a nun at the Oscars, and besides, it's a Sunday in Lent. 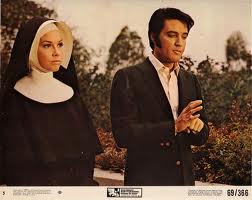 So I checked it all out on the internets, and sure enough, there she was.  Not to be confused with the horrible portrayal of a nun by pretend Sister Laura Petrie in her nine pounds of mascara laden fake eyelashes and vampire eyeliner in "Change of Habit",  Sister Dolores, an actual nun, made a documentary movie about how she left Hollywood and kissing Elvis to become a nun. Her movie is called,  oh...I already forget what it's called....  something about God being better than Elvis.

I believe my confusion lies somewhere in the dusty scripts of Hollywood and nuns.

Just the other day, I chanced upon the opening hour of Sister Audrey Hepburn in "A Nun's Story".  That is one upsetting movie.  Sister Hepburn has a humility problem that plagues her throughout the film and eventually causes her to stroll out the door in a very smart Chanel suit.  (Forgive me if you haven't seen the film and I just ruined the ending for you.  I believe I've saved you a couple of hours that could better be used saying rosaries.)  She is a very smart young lady whose deepest desire is to be a missionary and a nurse.  Some sort of fancy nurse, I believe.  A surgical nurse, perhaps.  She has the chops to do this, but Mother Superior is constantly on Sister Audrey's case about her lack of humility.

Keep in mind, that this is not ordinary humility, but nun humility.  This is the kind of humility that causes a novice to confess that she paused before acting when asked to dry the dishes because she thought maybe she should help wash them or that she sighed once when she saw the breakfast oatmeal was looking even more dry than usual.

So Sister Audrey is about to ace her nurse test that will land her in the Congo when Mother Superior calls her into the office and asks if she would be willing to prove her humility and obedience by blowing the test so that Audrey's nun nursing school rival can move ahead and be sent to the mission.

I didn't watch past that to see what Sister Hepburn decided to do. I have seen the film before and  I know she somehow ends up in the Congo, still a nun.  I was just so aggravated at such a ridiculous request. I understand that the Mother Superior wanted Sister Hepburn to have to do something huge to prove her metal.  But what about the poor people in the Congo?  Don't they deserve to have the actual best candidate for the job?  The people of the Congo hospital weep.

As do I.  It made Mother Superior look like a crazy person who is more interested in rules than in what the rules are for.  Nothing could be further from the truth. 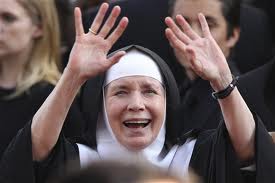 Humility. Lent. The Red Carpet.  Hollywood just cannot get nuns right.  Poor Sister Dolores is faced with the dilemma of the best publicity her message can ever get vs. that the publicity occurs on a Sunday in Lent.  I suppose she made the right choice. If she hadn't, none of us would have ever heard of her film.  Maybe her Superior ordered her to go.

I'm sure she skipped the Vanity Fair after party.
Posted by Sister Mary Martha at 11:48 AM

HA! I watched (or rather, I digitally recorded, then scanned through it on 4X speed, looking for Mother Dolores) hoping that she would be acknowledged - hoping that for 30 seconds, Hollywood would see the witness of the habit and make a connection, however brief, that it isn't all about THIS life. I hoped that maybe the camera would hone in on her early in the show, and that the MC would make a crack such as, "There's a nun in the audience. Let's keep it clean tonight." Wouldn't that have been grand? Seeing a nun in habit would have been a great witness. There are still many Christians in the US. It would have been especially poignant had it happened right before the tribute to those who have passed away during the year. It never happened, and her documentary didn't win. I'm sure the other documentary was very good. It was called "Saving Face" and was about a Pakistani woman whose face was disfigured when acid was thrown on her. This drew attention to the plight of Pakistani women. The Foreign Language film winner was from Iran. It could not have been more politically correct! In any case, Oscar winner or no, God IS the bigger Elvis, and Mother Dolores has chosen the better part.
Oh, and she didn't go because Mother Superior ordered her to go. She IS the mother superior! Unfortunately, I hear the jokes were just as raunchy as ever, and Melissa McCarthy was particulary raunchy.
Just my opinion.
Maggie

Above is the link for Dolores Hart. Seems she was nominated for an Academy Award and left Hollywood because she had a calling to be a nun.

Lately I've noticed that many of my friends and family state "Everything happens for a reason" very, very often. Is there a theological basis for this phrase, or is it merely a platitude people say to feel better about life? If it is a legitimate phrase, how do we reconcile this idea and the idea of free will?

Technically, Sundays are not part of Lent. Although we celebrate them liturgically as part of Lent, the Lord's Day cannot be a day of fast and abstinence. Six weeks of Monday through Saturday gives you 36 days. If you add to them Ash Wednesday and the three days after it, you get the 40 days of Lent.
The six Sundays in this period are not counted because each one represents a "mini-Easter," a celebration of Jesus' victory over sin and death.
Mother Dolores is Prioress of Regina Laudis but not the Abbess. She was asked by her Bishop to do something like this film and she says, “We wanted to invite the world into another order of life that might give some hope.” I admire her tremendously and will soon be entering a foundation of RL called Our Lady of the Rock. Well done Mother D.

This isn't the first time Mother Dolores has been in a movie since becoming a nun. I first became familiar with her through a PBS documentary about one of the sisters in her convent named Sister Noella Marcellino. Sister Noella is a world authority on artisanal cheesemaking and has really advanced the scientific understanding of how traditional cheesemaking works. It's called "The Cheese Nun: Sister Noella's Voyage of Discover." You can read more about her, with a mention of Mother Dolores, here: http://www.nytimes.com/2003/12/21/nyregion/21CONN.html?pagewanted=all
and you can buy the DVD through PBS or watch it through Netflix.

How did you know you had a vocation? Could you write a little about that for us. I am so confused about what God wants of me. Marriage, single, sisterhood--what kind of sisterhood? I have no boyfriend right now. I don't really want to get married unless God wants me to. But should I be single or a nun? I don't know how to answer that? How did you? Thank you.

Sister, you might like the book, the Nun's Story, better. Sister Luke leaves the convent in an outfit left behind by one of the posulants, with another in her cardboard suitcase. The outfit doesn't quite fit her. The order does give her a veil suitable to those who were nurses at the time in Europe, and two (count 'em) safety pins. The order also makes her take back the money her father gave as her dowry as a condition for giving up the religious life.

The book is MUCH BETTER than the movie, much more in detail as to why Sister Luke should not have been a nun in the first place, and how WWII in Belgium affected Sister Luke's departing her order.

I could never figure out why the superior in the convent near the tropical medicines school asked her to flunk, either. In the book, it does say Mother Superior stated after they get their certificates, that if she had known Sister Luke's abilities, she never would have suggested failing the exam.

Dual Role - Yes, Hollywood takes liberties when they make movies. In the Song of Bernadette, a young man wants to marry Bernadette. She flirts very innocently with him near the beginning of the movie. The writters added that to make it seem like Bernadette was making even more of a sacrifice by entering the convent. Bernadette was never "interested" in anyone. There was a young man who wrote to the bishop asking for her hand in marriage, sort of as a way of "taking her off the bishop's hands." It's not clear whether he thought she was a burden to the local church/religious order, or he just wanted to come off sounding that way in the letter. Maybe his secret motive was that he wanted his own private saint, all to himself but he didn't just want to come out and say it.
Anyway, you have to take movies with a grain of salt. The books are MUCH better. Another example is "In This House of Brede." The book shows Sister Phillipa's struggle with money, but the movie makes it all about an exclusive relationship with a young sister. It borders on lesbian. Neither is a very accurate or nice reflection on authentic religious life. Lay people tend to like it though, and suppose it to be quite accurate. It is about as accurate, spiritually, as Hollywood's portrayal of women is, physically.
Maggs

Shoot. I forgot to look up the saint of the day. Again.
Dual Grandma is right. I read " The Nun's Story" first when I was a child,and read it again (several times) as an adult. I love the book. I tried to watch the movie once. I didn't watch the entire movie. It was boring. The book was great.

Dual Grandma is right. You'd probably be better reading "The Nun's Story" by Katherine Hulme. The book was better by far.

I couldn't help but notice that you said "to pe precise" instead of be precise.