Music to My Ears

I would love to!  Besides that fact that St. Hildegarde is a fascinating person, her new status in the church is also something to talk about.

She wasn't a saint, officially. Four attempts have been made to canonize her, but the process took so long that it was abandoned.  She had made it to "Blessed", which means she lived a life of heroic virtue and a miracle had been attributed to her intercession.

Now she is officially a saint by what is called "equivalent canonization"  , which basically means she is a saint because the Pope says so.  There's a little more to it than that. The Pope doesn't go around calling people saints by osmosis.  That makes her all the more very special and worthy of our attention.  Next October she will become the 35th Doctor of the Church.  There are only 3 women who hold that title (St. Catherine of Sienna, St. Teresa of Avila, and St. Therese the Little Flower). Now there will be four.

Hildegarde experienced visions at a very early age, so by the age of eight--or maybe fourteen--she was sent off to the cloister with to be "enclosed" with and older nun name Jutta. And there she remained for 24 years until Jutta passed onto to her heavenly reward and Hildegarde was put in charge.  During this time, Hildegarde was a prolific, writer, poetess and singer.  She also was an herbalist and healer. 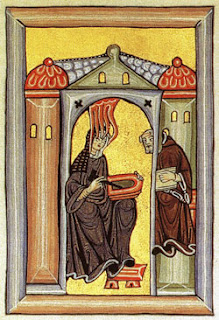 And the visions never stopped. This isn't a picture of an octopus attacking St. Hildegard. This a rendering of her receiving a vision in all five senses, which is how she described the experience.

Because 69 full compositions remain for us to enjoy, Hildegarde claims one of the largest repertoires of medieval music.  She wrote what is considered to be the first, or at least the first surviving, morality play. A musical, it has many parts and a speaking role for the Devil. She wrote buckets of music of all sorts, and of course many hymns.

She wrote down her visions. She corresponded with Bishops, Abbots and Popes. Nearly 400 letters survive. She wrote two volumes on herbs and medicinal cures.

She also did four preaching tours. Her writings about the Scriptures were so profound, stemming as they did from her visions, that she was the only woman around during that medieval time who was allowed to give speeches at all, let alone speak on the Bible.  She had ardent fans.

And if that isn't enough for you, she has an asteroid named after her. Asteroid 898, is called "Hildegarde".

I  am personally thrilled by her canonization, because it means we finally have a great saint to be the patron saint of musicians. Not that St. Cecelia isn't a great saint. It's just that she really had nothing to do with music at all and St. Hildegarde was a truly great composer, breaking the boundaries of medieval music.
Posted by Sister Mary Martha at 1:13 PM

St. Hildegarde von Bingen was one of my favourite composers to learn about in school. How wonderful that she's been appointed a Doctor of the Church! Thank you for such a lovely writeup of her life and works.

LOL, is that all she did? WHAT AN EXAMPLE!! I'll remember her every time I feel I don't have time to do stuff.

Thanks for breaking the great news that St. Hildegarde will deservedly become a Doctor of the Church! I have always admired this Renaissance woman from Medieval times.

I've been struck lately by severe headaches--the kind that are only gotten rid of by going to the emergency room and getting hooked up to IV painkillers. Coincidentally (literally--he went to the hospital in Cleveland at the same time I went to the hospital in DC) a friend of mine across the country is undergoing experimental brain surgery for his own crippling cluster headaches. I thought we could both use the intercession of a saint at this point, and found two names mentioned as patron saints for migraine suffers: St. Teresa of Avilla and St. Gemma Gelgani. Which has raised two questions in my mind:

And, more existentially, 2. Does it matter? I don't mean does praying for a saint's intercession work, because I know what you'll say about that. I mean, if I pray for the wrong saint's help, won't the saint I pray to still give me the hand up I need? Isn't that kind of part of their job definition? Or is it less effective if I invoke...I dunno...St. Joseph of Arimathea, who doesn't have any particular history with head or headaches than the headache sufferers official patron saint?

P.S. A third, half-facetious, half-serious question: 3. Will praying to the proper saint help us pay for our treatments? Insurance won't pay his $100,000 bill because the surgery is too experimental, and my own insurance has told me it won't pay for prescription refills in a timely manner.