Oh, My Aching Back

Back pain? Who is the patron saint for back pain?

We know that patron saints are people who have suffered from or dealt with the same problems we have (or thereabouts, or in a round about way).  And some saints pull double duty from not only suffering from what ails us, but from having been miraculously cured from said suffering as well.
St. Peregrine springs to mind (cancer). And the Opus Dei fellow. St. Jose Marie Escriva (diabetes).

And St. Gemma.  I'll let you head over and read her story.

Don't you think she might be a bit of a package deal? What with St. Margaret Mary and St. Gabriel being sort of pals of hers?

By the way, separated brethren who don't believe people in Heaven pay us any mind, we have lots of incidences where people from Heaven visit people on earth and pray with them or otherwise guide them. Surely you've heard of St. Joan of Arc?  She didn't just wake up one day and think, "Hey! I know! I'll head an army and save France! Right after I milk the cow!" No.  She heard the voices of St. Michael, St. Catherine and St. Margaret. Not to be confused with Margaret Mary. Joan's St. Margaret was St. Margaret of Antioch, who is the patron saint of peasants. 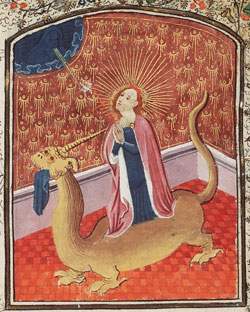 Poor St. Margaret was yet another beautiful girl who, after pledging herself to Our Lord, was tortured and beheaded. Legend has it she was swallowed by a dragon. That's the dragon there in her picture, munching on part of her dress, as far as I can tell. What actually happened was that Satan tempted her and showed up in the form of a dragon.

And then snacked on her dress.

And of course, should you be swallowed by a dragon, you'll know which patron saint to call upon.
Posted by Sister Mary Martha at 1:32 PM

Well, all three will be good as besides the back--I am borderline diabetic and my husband has cancer.

my sister is looking for a patron saint for a girl who is outdoorsy and athletic. I can't think of any - can you help? Thanks!

Monica,
How about St. Gianna Beretta Mollo?
I think she loved to ski and hike outdoors.