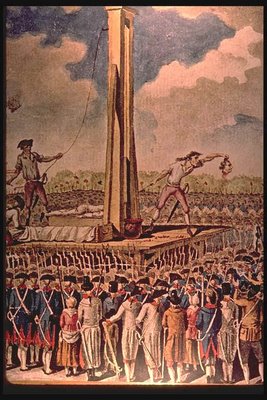 There was a method in my madness bringing up Catherine Laboure the day before her feast day. (Happy Feast Day Catherine! We're jealous!)

Now that you are aware of her story and the story behind the medal, I want to run this by you. This is a theory I read a few years back and it caused me to stew in my own juice ever since.

I'm not sure if I've discussed before that Mary's visits so often have a political bend to them. Fatima, for example, was a warning about what was going on with Communism and Russia. At Lourdes, Our Lady confirmed the long held doctrine that Mary was conceived without sin. The church has always maintained that Mary was conceived without sin but it wasn't officially dogma until Vatican I and there was a big fight over doing that. So Mary coming along and introducing herself by saying, "I am the Immaculate Conception" was quite a big deal. It confirmed another decision made at Vatican I: Papal Infallibility. The Church was always infallible, but the Pope was not personally infallible until Vatican I and then it became retroactive for all the Popes, even the teenage ones and the Borgias.

Mary is no slouch.

Here's a little more background for this theory: Mary appeared to Catherine in 1830, warning (she must have been reading the papers) that France was about to be in hot water again. The clergy came under attack in the very same month. The rise in popularity of the Miraculous Medal was in no small part due to the fact that Catholics were driven to hide their faith.

So here's the theory. Mary circled France to save the world because France was the source of all the evils of the 20th century.

I know a lot of people are thrilled to hear this.

I'm not thrilled. I don't care much for it when a whole bunch of people, like an entire country, are blamed for the evil of the world. You can't blame Great Britain for the Beatles. You can't blame America for "Girls Gone Wild". On second thought, maybe you can.....

The idea here is that the French Revolution spawned Deism, an idea that glorifies man and human reason, which led to Rationalism, which gave birth to secularism in the US and Communism in Russia.

Here's the part of the theory that spins my top: Mary circles France.

She starts in Paris with St. Catherine Laboure to pour out her grace to everyone because, boy, are they going to need it. She next appears in LaSallette in 1846. Two years later all hell breaks loose. Karl Marx writes the Communist Manifesto, the Pope had to flee Rome, there were riots in London and as if that wasn't enough, the Potato Famine!

So Mary stops in at Lourdes in 1858 and asks that everyone do penance and say the rosary. The Franco Prussian war starts in 1871 and Paris falls. Luckily Mary comes to Pontmain where the peasant children of the day (I can't think that Mary ever appeared to any non-peasants) report that Mary increases in size when they pray the rosary. Eleven days later the war ended.

At Pontmain Mary has 43 stars surrounding her. (Stars from the sky, not Mary Pickford and Judy Garland.) They signify the 43 years France has to get it's act together. Instead France secularizes the schools. So 43 years later the First World War began. Russia's fledgling democracy is overtaken by Stalin 3 years later.

Mary dips down to Portugal and appears in Fatima in 1917. Apparently no one ever prays enough and we have WWII, so Mary goes to Medjugorie. In 1981.

You can see this theory is just falling apart like reasons to invade Iraq. Although I must admit to you when I first read it I was sucked in. I had wanted to do a presentation about the whole thing while on my next speaking engagement, because I love talking about Mary's help for the world. I got out a big map of France so I could show her path, circling the country.

I was undaunted by not being able to find LaSalette or Pontmain on the map. They are teeny places. Perhaps France would like us to forget they exist. When I finally managed to find them, guess what? Those places are by no stretch of the imagination in a circle. If Mary was trying to create a circle she only managed to zig zag around France like Matt Talbot after he sold his shoes for a bottle of booze.

I was so disappointed.

I was even sort of okay, when I read the theory, of the dip into Portugal. It's not that far from France. Really...

But Medjugorie is really problematic. Not only is it way way out of the 'circle', it's more than 60 years later. The icing on the cake is that Medjugorie was recently officially dubbed not worthy of veneration or belief. The church official deciders decided that Mary just wouldn't have to repeat herself that much as what has gone on at Medjugorie. I concur.

What a shame. It would have made such a great presentation. I could have made a giant felt banner with a map of France and little felt Mary cutouts and a little Stalin head.

Back to the drawing board.
Posted by Sister Mary Martha at 10:30 AM

France is the source of all evils of the 20th century?

It seems to me that's aggrandizing France a bit, and the Blessed Mother is way too hip for that I'd imagine.

"(Stars from the sky, not Mary Pickford and Judy Garland.)" Mega dating your self there Sister.

I've only just learned how to pronounce Medjugorie so I won't sound like a recent convert as I work in the bookstore and now it's all off. Oh well, we sell not a few books on her appearance that never happened or that did but that isn't worth getting hept about.

And, I have no comment one way or the other regarding the theory but I have been wondering when she will appear Washington D.C. to a street person to let Number Two know it's really time he moved on.

"The Church was always infallible, but the Pope was not personally infallible until Vatican I and then it became retroactive for all the Popes, even the teenage ones and the Borgias".

My understanding is that the pope has always been infallible in matters of faith and morals and Vatican I only clarified it. "The theory" makes it look like the Council came up with it expo facto.

theodosius, the Pope always having been infallible was the outcome of Vatican II, among other things, but there was quite a fight over making that pronouncement. So much so that the Pope actually locked the Cardinals in the Vatican. Some left in a huff anyhow, at their first opportunity and refuses to vote. Everyone else voted yes.

Lots of people subscribe to the theory that Fatima was really about the Muslims - she has a special plan to convert them through that appearance.
So, if you throw out Medjugorie and then recategorize Fatima, you've still got France.

Not geographically. It's just not a circle at all. So disappointed.

When temporal power was lost with the seizure of the Papal States, the only other power left to keep the Papacy in charge was spiritual power.

Hence the doctrine of Papal Infallibility.

I thought the Cardinals were always locked in the Vatican? Wait, I guess that's for papal elections, not Councils . . .

the Cardinals weren't always locked in the Vatican to pick the Pope. They went to some very nice places and took WAY too long, months sometimes, to pick a Pope. Now they get locked up until they get the job done, which has definitely improved the process.