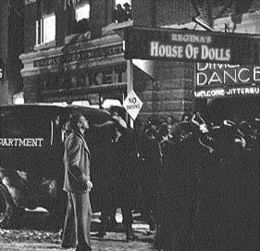 We went to the Home Depot as late as we could muster, given our work hours and the fact that the bathroom is out of commission. All the contractors and people who know what they're doing are there during work hours. We mistakenly thought that there would be less people at 9pm.

At 9pm at the Home Depot there are a lot of terrible looking people. People who have 5 hours to paint their apartment walls before they move out in the morning who are looking for the cheapest white paint they can find that will cover up the unsightly colors they painted the place without the landlord's permission and 7000 hand prints. People who are buying plants and rugs and fans and doorknobs and drawer pulls. And lots of people with emergency plumbing problems. Because it isn't really an emergency if it's not at 9pm now is it?

It's an oddly good match when we arrive in a land of zombies. We look like exorcists. Sort of.

Another reason it really doesn't do any good to go so late is that there are also less Home Depot employees. If they spend their work days fleeing contractors and people who know what they're doing and what they're looking for, you can imagine how they feel in the sea of zombies that is night time at the Home Depot. It's a matter of life and death, us or them.

We found the plumbing aisle on our own. Did I say aisle? Aisles. One whole aisle of bathtubs, one of fixtures, one of toilets, one of hardware, pipes, fittings, plumbers tape and a whole wall of drain opening products.

Sister St. Aloysius was right! There is a product that you can dump down the drain that's supposed to get rid of tree roots. But it said something about the septic tank and it was dressed in it's own private Hazmat suit so I was nervous about trying it.

That would mean we would have to ask someone. Perhaps we should leave, have a Mass said for us and come back.

We could try to call on St. Vincent Ferrar, but I have to admit I'm dubious about his patronage of plumbers. St. Vincent is the patron saint of plumbers and construction workers because he did so much to build up the church. He was a scholar. I'm sure he wouldn't know a pipe wrench if he fell over one. He would be even more lost in Home Depot than we are now. But then in heaven all things are possible. (Even war...)

We decided to split up to find help. I found a poor bug-eyed man trapped by several zombies asking questions because he had the misfortune to be threading some pipe for a customer. even if he dropped the pipe and ran he would be trapped on the end of the aisle by a bunch of boxes and a fork lift. Ha!

My attire caused the zombies to part like the Red Sea and I asked him about the Chemical Warfare product dressed in it's own Hazmat suit available to me. He was very nice, soothed, I think, by my presence, an unusual experience for both of us, I'm sure. He told me to
"never use that stuff" and he told me some other stuff I could use. St. Vincent comes through after all.

So I went to find Sister St. Aloysius. Somehow she had found a frightening looking Home Depot employee. Maybe he had found her. A rummy, or perhaps a parolee. Remember "It's a Wonderful Life"? Remember how when the angel shows George Bailey what his town would look like without the influence of his life and how the local bar is a horrible den of iniquity and a terrible old drunk who had spent "twenty years as a jailbird" comes in it turns out to be the pharmacist that would have poisoned a little boy had it not been for George Bailey?

When I got there, Sister St. Aloysius had turned into a zombie. Mr. Gower was standing side by side with her and she was staring blankly at all the products. When I stepped in and grabbed the bottle of what the pipe threader told me to get the spell was broken, the orange vested Mr. Gower nightmare disappeared in a poof.

Poor Sister St. Aloysius blinked at me. She had explained to the pathetic version of Mr. Gower in an orange vest that all the sewage had come up through our toilet and that we needed something to unplug it. Mr. Gower had stood close to her side, put his arm around her waist and pulled her next to him and said, "What did you do?" She had peeled herself away from him.

It was at that precise moment I had arrived.

We tried to beat a hasty retreat but here's another reason late night isn't any better. There are just as many people shopping at 9pm, but there are far fewer checkers at the check stands. Luckily, we have the patience of many saints to call on. And there's a McDonald's right in the store.
Posted by Sister Mary Martha at 10:18 AM

Sister, your Home Depot stories have convinced me that marriage was indeed the right vocation for me. My husband makes those trips for me now. Sometimes I go along, but he does the work. (aaaaalleluia!)

Sister, how much Purgatory time does Mr. Gower have to look forward to for having come on to a nun? Aren't nuns married to God? I can't imagine making a pass at His spouse is good for one's eternal soul...

Dear Kasia, the sad thing is I don't believe that Mr. Gower was 'coming on" to Sister St. Aloysius. I believe he was trying to make a light hearted joke. I have a feeling Mr. Gower does indeed have PLENTY of Purgatory time coming for a myriad of reasons, like not helping customers at his own whim.

Ahh...I had to think overnight about what kind of "light hearted joke" Mr. Gower could have been making. Now I think I must have added time onto my own Purgatory experience by assuming the worst about Mr. Gower... :-)

Copper sulfate granules, sister? Or were those the ones in their own Hazmat suit? If you don't get satisfaction & your pipes are old PVC you might want to get a plumber out there. We had a lovely set of elm roots coming in the trap in our bathroom and it turned out the guys that laid the original pipe hadn't cemented it at the joints.

You poor thing! Our Home Depot has a Harvey's; much better!

Sister, a question has arisen at my blog and I thought I'd go to the expert here: was the miracle of the Loaves and Fishes related to the Sermon on the Mount, or were they totally separate events?

I was trying to refrain from posting again, but this was just TOO GOOD. The "Wonderful Life" reference: my pals & I watch it every Christmas, sometimes twice, and practically know it line-by-line!

The instant you mentioned "rummy" -- I had the image!

P.S. You see? I REALLY am reading all your archives...