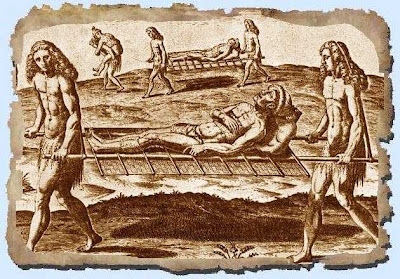 Some people are really terrible at being sick. Today's opportunity for suffering stems from Sister St. Aloysius' terrible cold. (I told you opportunities would present themselves everyday!) She's suffering with a cold and I'm suffering from her suffering.

She's attempting to soldier on, but I may have to conk her out with a frying pan before too much longer. She's having post nasal drip and is making Felix Unger noises while trying to pretend she's not making any noise.

I had a flashback, or perhaps it was a vision, since I have never ingested hallucinogens. Suddenly I was 8 years old. My father, who was a terrific carpenter by hobby, was once again remodeling a section of the house. He eventually remodeled the entire house but on this particular day he was stopped in his remodeling tracks because he whammed his thumb with a hammer. His thumb was the size of his head.

He refused to go to the emergency room even though my mother was relentlessly insisting that he go so they could drill a hole in his thumbnail and relieve the swelling. I was on his side in this. Drilling a hole in one's thumb nail that's already swollen to the size of one's head doesn't seem like a good way to relieve pain.

But his refusal to go had nothing to do with pain. We lived in a small town. Anything that went on at the hospital was printed in the local newspaper. If your child stuck a pea up his nose and went to the emergency room, it was in the paper the next day. Six people would ask you about your child's nose and the pea and pass judgement on your parenting skills and/or your child's mental capacity. My father didn't want to see:

I'm sure they included the address so people could drive by your house and gawk at the guy who whammed his thumb.

He suffered all day and then sat at the supper table barely able to eat. Since my mother couldn't bring herself to conk him out with the frying pan, she was still fussing at him.

"He refuses to go to the hospital because he doesn't want his name in the paper and we have to sit here and listen to him...." She then mimicked what my father was doing, which was to suck air through his teeth in an inverted hiss. "It's ruining everyone's dinner!"

The poor man ruined our dinner and then relented. Guess what it said in the paper the next day? I'm sure my mother has it in a scrapbook somewhere.

A recipe for days to come. Just wait until Sister Mary Fiacre and I catch the cold simultaneously and all three of us are listening to each other suffer and pretending not to suffer. Add the Stations of the Cross and stir.

We got to offer up the stomach flu last week. And 4 ear infections. And backed up plumbing (at the same time as the stomach flu. Do I get extra points for that? I thought of you as the plumber was up on the roof with his snake down the vent.)

Here's a toe to keep that thumb company!

I think you do get extra points...if there are points. Find my post about Brownie Theology. It could apply here.

I only have a story that mirrors SMM's.

Hubby with raging cold-like/flu symptoms who *refuses* to use symptom suppressing OTC meds because he likes to avoid taking too many medicines. :>/

A reasonable stance, but he really doesn't take any medicines on a regular basis. ????

He was sneezing 50 times a minute and then blowing his nose with toilet paper/fast food napkins/paper towels and refusing the offer of his very own box of Kleenex.

And, unlike his normal sunny disposition, grouchy and touchy about being "helped".

I could say he gave up OTC sniffle meds/Kleenex for Lent, but he's a Baptist.

So I just stood by with hot tea and such and offered it up. :>)

There should be a saint of emptying snotrag-filled wastebaskets. ;>)

Thanks! I thought we had it pretty bad, but today I met a woman who's kid had scarlet fever, so it made our sufferings look like small potatoes. (blighted, famine type potatoes, but small!)

Here's hoping your family is past the worst. :>}

There's always somebody whose problems/suffering puts us in mind of how good we have it, really. :>}

And I hope Sr. St. Aloysius is either doing OTC sniffle meds or is past the worst of it, too! :>D