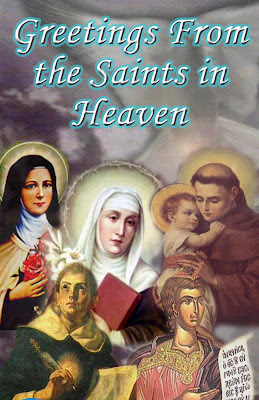 We're still having questions about honoring the saints and, I'm sorry to say, praying to the saints, which we never do even though no one believes us. For the zillioneth time, we are asking the saints to pray for us, just like we would ask we ask one another to remember each other in prayer. I guess the saints are supposed to just sit around in heaven enjoying their hobbies and forget about us until we get to heaven and get to sit around with them. Someone brought up dulia and hyperdulia as if this would be helpful. Although these Latin terms sound like something you might hear about on a drug commercial, they help explain how we honor the saints. I have serious doubts that someone who can't understand that we don't pray to the saints or that the saints might be interested in praying for us, the most simple straight forward explanation possible, is going to get dulia and hyperdulia through their thick skull. I really do. But here goes:

Let's pretend for a moment that there is no afterlife. No saints, no heaven. Like the John Lennon song. Only let's not pretend to be John Lennon. Because when we stop pretending you could seriously go to hell for doing things John Lennon did while you were pretending.

So who do we honor the most? I'll let you decide who that is for yourself. Mom, grandma, you lovely Aunt Clara who raised you. It's that person that you can't hear anyone say a bad word about, the one that is set apart from everyone else you know because they are so special to you. The Bestest of the best. We can say that, because we're in this pretend world and we don't have to worry about bad grammar or what should be capitalized either.

(It's not really.....remember we're pretending. It's a good thing, too, or we'd be married to Yoko Ono.)

All the other people that we honor, the brave soldiers, the wise teachers (I would say priests, but there aren't any...no need for them with no heaven or afterlife), helpful relatives...you get the picture. These are all people we honor because they are deserving of our honor.

Not really...just in this pretend world, the one in which atheists and people who think they are witches and vampires live. The one where we would actually like hearing Yoko Ono sing.

So here in the real world, where we can't get to the 'off' button fast enough should we so much as see Yoko Ono, we have these two types of veneration.

Hyperdulia is only for the Blessed Mother Mary, no one else.

Dulia is for the Church Triumphant, the angels and saints as friends of God. The heavenly host.

Don't get your knickers in a knot. There is no worship involved. Worhip is for God alone.
For God we have Latria. A class by itself.

Regular honor is for the Church Militant, those of us alive here on earth.

Since I'm on this honesty kick, let's come clean and admit that many of us have given good reason for some people to remain thick headed about Catholics and the saints. I have entered more than one home that had Mary practically dripping from the ceiling. Every surface, every space on the wall had a statue of the Immaculate Conception or a picture of Mary and St Ann, Guadalupe standing alongside Fatima, the Mater Dolorosa, Our Lady of Perpetual Help, The Queen of Heaven, Stella Maris, rosaries hanging from every frame and mirror. Besides the crucifix over the bed and the fact that Mary is holding the Baby Jesus in some of the statues, Jesus doesn't seem to be very important.

Oh well. There's a reason it's called HYPER dulia. It's still not latria. Even if it looks like it. No wonder people get confused.

Dulia is also what we call the type of veneration we have for relics, which include items a saint has used while he or she was alive (that's a second class relic). This veneration also drives the separated brethren round the bend. We'll talk about that the day the separated brethren toss Uncle Joe's Purple Heart in the trash along with their old copies of Teen Beat and yesterday's soup cans. The day that John Lennon's autograph has no monetary value.
Posted by Sister Mary Martha at 1:06 PM

Thank you for your latest entry!

So what exactly ARE we doing when we pray a novena to St. Joseph. If we're not PRAYing to St. Joseph, PRAYing the St. Michael chaplet, etc., what IS the word we should use when we speak of such things. That is where my confusion comes in. (And I'm a good cradle Catholic!)

I believe the word you're looking for is 'intercession'. We are praying for their intercession...which is simply asking them to pray for us. In a novena we're asking a lot. Nine times. Enough to pull St. Joseph away from his heavenly flooring project.

I discovered you from the Kitchen Madonna blog, and I am completely smitten! If you have a moment, I bet you'd like my podcast - it's real Catholicism, but we don't take ourselves too seriously - sound familiar? Thanks for a great blog!

LOL! Oh, what a hoot. Thanks for this post!

I think the problem isn't with the 'to'/'for' distinction, (since in normal conversations, we do talk about praying *to* the saints) but because people think the verb 'to pray' automatically involves worship.

Actually, it just means 'ask', as in all the Shakespearian characters running around saying "I pray thee, knave..." Whether it's appropriate or not all comes down to what you're asking for, as you said.

That's the price you pay for having a faith that's 2,000 years old; we're still using words in a way that the rest of the world used to but doesn't any more!

(If you really want to see proof of this, take a look at the use of the word 'cult' in the ancient Church, and watch the separated brethren *really* go off the deep end.)

Just kidding. I think another part of the problem is that if you look at the prayers they read 'holy St. Joseph...' which Does, in fact, make it look like you are talking to him rather than to God. Personally, I don't have a problem with this because I know any answer will be by the grace of God, after St. Joe gets done asking him.

I'll be honest. Protestants in general do not venerate the saints highly enough.

I don't find in problematic that people go to the saints for help.

I will say though, that this practice should never take the place of spending time directly praying to God. Asking my friends to pray for me is good. Asking them to pray, and not praying myself is not. And I think sometimes people don't spend enough time in prayer with God.

Also, veneration of the saints and the blessed Virgin is a good thing. And I think that most good Catholics understand how the different levels of honor work (even if they don't know what "dulia" means). But I do think there are a few Catholics who do venerate Mary more than Christ, and who love her more. When protestants see this sort of thing, it is sometimes easy to develop misconceptions about what Catholics believe.

A matter of semantics:

These are things I'm having my impressionable little children memorize, and if something has changed in the last 40 years, I'd like to correct myself. It is, really, just a matter of semantics in my view, but I am quite a stickler for semantics. Sister, would you please address this distinction? {You know it would have to be a homeschool mom who would bring this up, right?}

Sister, I'm another homeschooling mom who is about to go on a tangent. (Hopefully, not too big of one.)

You mentioned relics (which have plenty of Biblical basis, but nevermind that). Is an item blessed by the saint (say, a Rosary blessed by a pope who is declared a saint sometime after his death) also a second-class relic? Or is that third-class?

All I know is that it's special enough to keep away from my children until they are older and more responsible. ;)

Dear Sister:
I just found this post. Wish I found it last nite before I recorded my podcast on the Communion of Saints(My wife and I do little apologetic snippets)
Mary dripping off the ceiling! I know what you are saying. It's hard to defend that, but if people hate all things Catholic, they will never understand dulia vs hyper vs latria, but i think the John Lennon analogy was funny.
God bless

I completely agree, particularly about not taking the time to pray yourself. It's like when my six-year-old will send one of her friends over to ask if they can go play on the swings or something. THAT DRIVES ME NUTS. She should have the gumption to ask herself! How can we then ask others (friends, relatives, the saints) to then pray for us if we haven't prayed for us first?

Also, about your last paragraph - there are knuckleheads wherever you go, even in the Church. Basing an opinion on Catholics on these crazies (which I fully understand that you haven't done in any way) would be akin to basing an opinion on Protestants on the crazies that play with snakes in Arizona.

I don't like saying that we don't pray to the saints, but that's because I'm using the older meaning of the word. Hehe, just to point something out... does praying involve worship? well, how old a definition of worship do you want?
O.E. worðscip, wurðscip (Anglian), weorðscipe (W.Saxon) "condition of being worthy, honor, renown," from weorð "worthy" (see worth) + -scipe (see -ship). Sense of "reverence paid to a supernatural or divine being" is first recorded c.1300. The original sense is preserved in the title worshipful (c.1300). The verb is recorded from c.1200.