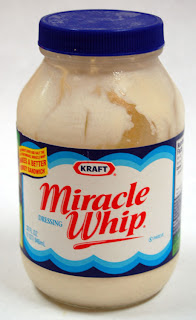 Here's something I've learned from my stay here in the Midwest. I do like the tangy zip of Miracle Whip. Especially when it's on a BLT made with home grown tomatoes. Truth be told, I don't have a BLT. I have a BT. I don't care for lettuce on a sandwich. My moral dilemma is this: do I ruin my sandwich with the L and offer it up to the Poor Souls in Purgatory? It seems like a waste of food to me, even though I would actually eat the L. I do like L in it's place in a salad bowl.
The whole thing may give me some indigestion to offer up anyhow, as I have been vexed by the raging argument two posts down amongst the comments. Although things may have smoothed out to some extent, I have not been able to get past this notion, although I have no problem loving the poster:
"Church teaching condemns the PRACTICE OF, not the PERSON. It's more merciful."
Excerpt from anonymous post above.
What an intriguing concept. How does one NOT include the other. If something is practiced isn't something practicing it?......It seems that if a practice is condemned then the real condemnation lies with the person because the person has the soul and not the practice.......
I'm going to blow right by the regular theological argument which goes something like this: the sin is forgiven and the sinner can choose not to sin again. We can separate the act from the person because the person can change, and also because we can't judge the motivations of others or what is in their hearts.
We do, but only in court.
I have to go for the practical approach. I maintain that you hate the sin and not the sinner on a daily, if not hourly, basis. It's how people stay married, it's why children actually grow into adulthood without being pushed off a cliff before age ten. It's how people manage to stay at a job year after year side by side in small cubicles, it's how they manage to take public transportation without bringing a sidearm.
It's how you maintain a long standing friendship. It's how nuns live in convents together and how basketball teams drive toward a championship season. It's how the Freemasons, the Catholic Church and the United States Senate stay powerful.
Well, maybe not the Senate.
The problem people have is not with the concept, it's with the practise on a larger scale. It's one thing to forgive your husband because he passive-aggressively leaves toothpaste spit in the sink or to forgive your co-worker because they went behind your back to the boss. That's not you out there with the semi-automatic weapon at the post office, now, is it?
The problem is applying the same forgiveness when someone has really wronged you. Or the world. In order to do that, we must find our way to the soul God made, which was perfect and is forgiven by God. No one said it was easy. Too bad. Offer it up.
Otherwise we have to tell that nun who hung out with Sean Penn when he was on death row there to go home and watch TV or something, as she may do about as much good there. She can keep her mind sharp with a good crossword puzzle.
Posted by Sister Mary Martha at 12:01 PM

Oh! Now you've made my mouth water for some home grown tomaters. Dang, I love those things. My neighbor's are almost ripe...ahhhhhh! I'll take that overwhelming urge to go pick some right now and offer it up. It won't be easy. Somebody's gotta do it!

I've been thinking about this post - separating the practice from the person. Of course we forgive the sins of those around us, and yet the Bible says even a child is known by his actions. While a person most certainly can change, their actions show us much about their character.

This thought has led me to another area I've been researching. Standards for modest Catholic dress.... can one really say that their manner of dress has nothing to do with their heart? Common sense tells us that a person's choice of clothing does tell you something about them. Colleen Hammond's book "Dressing with Dignity" has much to say about the history of women's clothes, the Church's thoughts, etc.

What do YOU think, Sister? Willing to share your thoughts on this? Should women wear only dresses and skirts? Are pants ok?

There's nothing finer than a homegrown tomato.

I went through a period of several years when I LOVED Miracle Whip, but then I lost my taste for it. Now I can't stand the stuff, and use only Mayo. I don't understand it. Miracle Whip hasn't changed. At first I thought maybe I was just needed a break from it (I have months where I can not get enough Hollandaise sauce, and others where I don't want any.), but it's been 20 years now, and my taste for Miracle Whip has not returned.

We all have stuff we like as kids that we don't like as adults. (Get that peanut butter away from me.), but I lost my taste for Miracle Whip in my 30s. I can't think of any other food I loved in adulthood that I eventually went off of so completely.

dr. mooney, Don't you know you have a moral obligation to eat meat? Those poor creatures WANT to become part of a higher form of life, and the only way they can accomplish this is to be eaten. You've got a lot of catching up to do!! :)

I think you ought to be able to eat your sandwich any way you please. If it's already been made and it has lettuce on it, you might just set it aside to put in your garden later. Some creature is sure to eat and enjoy it. Then it wouldn't be wasted. I don't think lettuce is one of those foods that could harm any kind of animal, do you?

We have been enjoying no end of BLTs in our house now that our tomatoes are in.

How do you feel about the "already cooked" bacon?

Okay, enough of the small talk. Permit me, please, to move on to the thorny subject weighing heavily on my heart. Besides praying for their souls, how can one deal with the anti-Catholic hatred which abounds, specifically related to the recent settlement of the sexual abuse cases in LA? Have you any words of wisdom or common sense?

Just in case you think I wasn't paying attention, I am, as I write, loving the sinner but detesting the sin related to this abuse scandal.

You made me want one when I went out yesterday with my mother. I am looking forward to its leftovers along with only one gourmet beer. lol