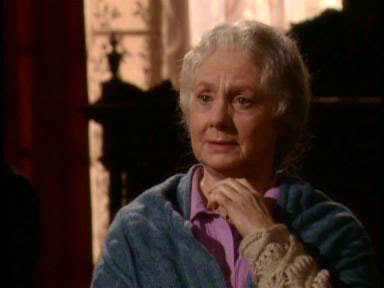 I was in a quandry as to what to give up for Lent. I've more or less given up everything as it is, under my present circumstances (although things are improving and thanks for your prayers!).

At least there is the opportunity to share in Christ's suffering. I've been watching my mother's soap opera with her as I am sitting with her day and night. That would be plenty of suffering, right there (the soap opera part), but the main family on the soap opera is supposed to be a group of Catholics. Sometimes there are some pretend Irish Catholics on there with very bad, very tortured accents. One of the characters was a nun, but went the way of Audrey Hepburn and then some, having an affair with a married man and then pretending to throw herself off a cliff ( a festival of mortal sin), only to resurface scores of years later to announce that one of the other characters is her long lost son. "I'm yer moodder." Thankfully for all of us, she dropped dead after her announcement.

Now I know how Jesus feels watching us all sinning away every day.


OK, here's a dumb question for you. I've recently heard that cremation is ok, but not encouraged for Catholics because of the resurrection of the dead. But I can't follow this line of thought for a number of reasons, one of which is that if being all in one piece and in one place mattered, saints wouldn't be in little pieces in altars. (Another is that I just think God can cope. And bodies mostly turn to dust after a while anyway, a system God devised...) Anyway, can you explain this to me? It came up in a course on Grief today, and I was puzzled.
Thanks so much.

I think I may have covered this once before, but we'll just run through it again quickly. The Catholic Church did not used to allow cremation because of the Resurrection of the Dead. (That means at the end of time, you will be reunited with your body...which is a good reason to keep yourself in shape.) But then the Church decided that it was okay, since you turn to dust anyhow. Fast dust (cremation), slow dust, it's all dust. It will be up to God to sort out all that dust. I'm not sure why it's not encouraged. My personal feeling is that is just residual discomfort because it was not allowed.

However, there is a case where cremation would be a mortal sin. That's when you have yourself cremated to say "Nyah! Nyah!" to the Church and show how much you don't believe in the Resurrection of the Dead one way or the other. "Ha!" you are thinking, "resurrect THIS!" That would be a mortal sin.

You said Catholics are not bound to venerate the saints, only highly encouraged. Does that go for the Blessed Virgin too? What about the talk of her being the "Mediatrix"?

But you don't have to pray for anyone's intercession. The reason I make that distinction is to comfort all those people who insist on only talking to Jesus. My father used to say, "stupid with an attitude". I would say, proud to be missing the boat on asking heroes to pray for you. Nonetheless, as a Catholic, you can skip asking for the intercession of Mary and the saints. As stupid as that is.

The Mary thing is particularly vexing. Here's what I have to say about the idea that ignoring Mary is a smart move:

So. You only talk to Jesus. Good for you. Let me get this straight. Tomorrow you are invited to a party and Jesus is going to be there. You get to this party and you talk to Jesus and it's just wonderful. You sit down on the couch with your plate of cheese and crackers and, lo and behold, next to you on the couch is Mary, with her plate of olives with pimento. You say nothing to her? You just sit there staring ahead eating your cheese? Wouldn't you be fascinated to get to talk with Jesus' mother? Seriously, wouldn't you? If Jesus wanted to sit on the couch too, would you just shove Mary aside? And what if she said to you, "is there anything else you'd like me to say to Jesus for you?", your reply would be, "no, I'll just talk to Jesus myself"?

And what do you think Jesus would think if you were so rude to his mother at the party?

What did we learn from the story of Jesus changing the water to wine? You might

remember that He didn't want to bother with the whole mess. He particularly didn't want to let the Messiah cat out of the bag yet. But when His mother asked Him to do something, He did it. Moral of the story: Jesus listens to His mother.

Don't be stupid. Ask her to pray for you. She's yer moodder!

I'm not touching the Mediatrix explanation with a ten foot pole...at least today...because it is difficult for many people to understand at all and will only make those people who still can't get the simple explanation (that we have to say until our faces turn blue) that we don't pray TO Mary just all the more stupified.


I have a question. Is it possible to "miss" one's vocation? To feel called to Holy Orders, for example, but through stubbornness, fear, lack of trust, or ignorance, choose another path that wasn't God's design for us?

Well sure. That's what free will is all about. Mary could have said no. Joseph could have taken a powder. There are plenty of saints who avoided God like the plague for 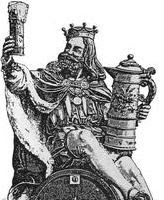 as long as they could. Surely there are people who lived as, say, St. Augustine did, party animal that he was (he is the patron saint of beer) and never had a St. Monica to cry and pray them into the priesthood and just partied on. St. John of God lived the life of a regular fruit cake until he finally found God in the looney bin. I think he still resisted for a while after that. He sold holy cards, but he didn't believe anything. That's why he's the patron saint of greeting card makers. There are people whose parents wouldn't let them join the convent or the priesthood. Too bad for those parents. We were always told that giving a child to the priesthood or the convent was a free ticket to heaven.

I think that's still true. I'd better look it up and make sure it's not another
"nun story" (sans Audrey Hepburn).

Okay. I looked it up. Let's just say, there are some nuns spending quite a bit of time in Purgatory just for their rotten fact checking. I'm shaking my head. I hate to think of all the things I've passed on with my rotten fact checking. It seems I uncover a new one every day.
Posted by Sister Mary Martha at 8:42 AM

Just keep doing what you're doing Sister. You are the highlight of my day!

HA! That's MY show! It used to be (20+ years ago) full of interesting intrigue and a few plot twists worthy of James Bond, but has denegrated to what it now is. I've seen about two weeks of that show in the past 10 years...

I'd be pleased to take some of your unfinished penances upon myself, Sister. I love you and your blog.

Sister,
As I recall, the real problem for the Church is being appropriately respectful to the body. At one time cremation was a very pagan sort of thing, so the Church outlawed it in order to make a distinction. Unless I'm mistaken, the original symbolism in pagan cremation contradicted the resurrection of the body.
While cremation is now permitted, it is considered a sin to scatter the ashes.

I get a hoot out of your blog, though I'm protestant. Today I couldn't resist disagreeing with your father. Not to say that there aren't arrogant Protestants...there are and I am one of them at least part of the time (and perhaps now). But most of us, when we insist on talking only to Jesus, do not intend arrogance. We are simply repeating what our church taught us from birth. I've often seen Catholic submission to the magisterium characterized as proper humility...wouldn't the same fidelity to church teaching also be humility in a protestant? (I realize you must in the end regard our position as error.)

As a former Lutheran I struggled with the 'praying to saints' thing for a long time. I can say with total certainty Saints do help. I credit the birth of my first child to St. Gerard. The doctor said my son had died in utero. He is a regents scholar in college now. Thank you St. Gerard.
I credit St. Raphael for the healing of my cousins baby girl. Thank you St. Raphael.
I credit St. Anthony with saving my sanity more times than I can count. He finds all the stuff I lose. He is also a very comforting Saint. Thank you St. Anthony. Tracy, you may find it interesting that my Lutheran family has used St. Anthony several times and still preach the 'no praying to saints' until they are desperate to find a lost item. St. Anthony works for them every time too.

Yes this woman is definitely a Marrano! They are legion.

Question for you about the saints. I can follow asking them for prayer - seems like a great idea to me. I can use all the help I can get. But how do they hear them? God can hear me, obviously. Someone once suggested that my prayers rise to heaven where the saints are, but I always thought God heard my prayers because he is right here with me always. Could you explain, please? Or refer me to an earlier post if you already have?
Thanks so much.
Sarah

Sorry, one more question:
praisedivinemercy says it's a sin to scatter ashes. Is that so, and if so, why? This is interesting.
Sarah