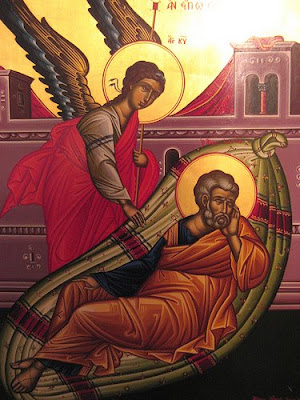 We're still discussing one of my favorite topics.


I'm sorry, you lost me after you said this priest taught you about dreams and then went on to say he didn't believe the miracles of the OT (at least the manna and the Red Sea) were really miracles at all, other than the timing. So how is it this man, who couldn't figure out the miracle thing, which is clearly spelled out in the Bible, be an expert on dreams, which are usually so vague and confusing? So St.Joseph was really the angel in his dream and the warning in the wise men's dreams were really from themselves? I don't believe that all dreams are safely tucked away into that defragmentation theory. If you've had a vision dream, you'll know it. And they aren't always clear as to their meaning, at least not right away. I truly believe God uses dreams sometimes to get our attention and put us on a path of discovery.
Kathy

Oh, Kathy, you'll have to read what I said more closely. I did not say the priest did not believe in the miracles of the Old Testament. I said he was undaunted by the fact that manna grows on trees and that he believed it was a miracle because the Chosen People stumbled across it right when they needed it.

He wasn't an expert on dreams. He was just explaining a couple of things he had read about dreams. I don't even know why he went into that. It didn't really have anything to do with the point he was making, that the Prophets were relating a dream they had had.

I'm the one that took up the gauntlet. I found that one piece of information so fascinating that I read everything I could find on the subject, including the silly stuff, like 'dream dictionaries'. I had the same reaction when I visited the train that hauled Abraham Lincoln's body across the country after his assassination. There was one piece of information I found so fascinating (that Lincoln was re-embalmed over and over again during the trip), it launched me into reading everything I could find about Lincoln.

But your point is a very good one, because we do indeed find people in the Bible, in the Old Testament and the New, who have angels visit them with very important information that must be heeded. That said, we don't want to believe that angels are visiting people in their sleep, just because they think that's what happened. I'm sure you enjoyed the lovely picture up top of the angel visiting St. Joseph. But we don't want to think very long about this angel visiting Joseph...

Smith.
I've actually covered this before. Go ahead and read that. I'll wait here and pass the time watching this:

I would just really want to caution people that St. Joseph didn't have angels visit him in his sleep night in and night out. I would think that if actual angels visited you in your sleep, angels coming with the power of a message straight from God, that you wouldn't wonder for one minute whether it was really undigested beef.
Posted by Sister Mary Martha at 5:00 PM

Ok, point taken! I did go back and re-read your post on this and now I see where I jumped to some conclusions. I guess I just thought the priest's teachings were intended as a point to legitimize the topic. I just get fired up when I see that someone seems to put a subject into such a definitive category. Sorry for my misreading your post, I'll exercise greater self control and better reading skills next time!
Kathy

Sadly it is extremely rare for me to remember my dreams. I used to say 'I don't dream' but I know better now, everybody dreams during REM sleep.

So anyway, if I woke up with a vivid memory of a dream in which Mary or a Saint or Jesus spoke to me...well I would be pretty moved by that to say the least.

Sister, would you perhaps know of a good patron saint to pray to for a dying faith to be restored?

Sister, can I say one rosary for more than one intention or is that "cheating"?

Sister, I had a dream that you won this contest!

I had a dream that the blessed Mother was really angry with me for some reason or other, so I woke up from fright and decided to read a while. I reached out to the heap of books next to my bed and the one I picked up (in the dark so it was truly random) was 'Be Not Afraid' by PJPII. I wasn't quite sure what to make of this, but it struck me as God's sense of humor at work again.

Sister, if all this dream stuff is true, then how did Maria Goretti become a saint? Besides people asking for an intercession, what if her rapists dream was just his way of calming himself down, just imagining that she had forgiven him? How do people figure out if their dreams are in fact influence by God, and not just something they are left to by their own paranoia? Surely they must consult with people, right?

Why is Elvis in a play about Joseph?

Hello Sister. I've recently learned from a psychologist that your dreams are your sub-consious talking to you. If you aren't understanding what your sub-consious is saying to you in a dream you can actually 'ask' him/her to change the dream because you are not 'getting it'. It really works. Especially on recurring dreams.

anonymous looking for a patron saint for one whose faith is dying:

St. Anthony, finder of things and of lost souls.