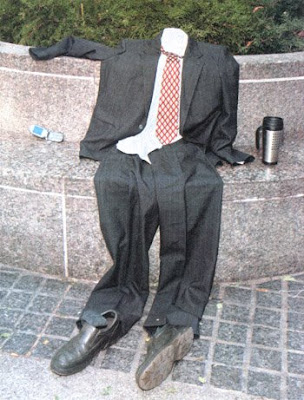 Luckily, Catholics get to have a drink:


On a business trip, one of the reps from another district got a little tipsy and told me I was alright, and I wouldn't be "left behind". He was crying. He must worry terribly about people not getting caught up in the rapture, but I heard the whole rapture idea was made up by a guy in Ireland in the 1850s. I didn't know what to say to him. Any ideas?

Question 3(sorry!)I said the Luminous Mysteries today and wonder what they mean by "Proclamation of the Kingdom". What do I meditate about during this mystery? Thanks for your help Sister!

Your poor friend. He's concerned that you'll be LEFT BEHIND. That's nice of him. Isn't he concerned that he'll be drunk when the rapture occurs, since he seems to think we are living in THE END TIMES? 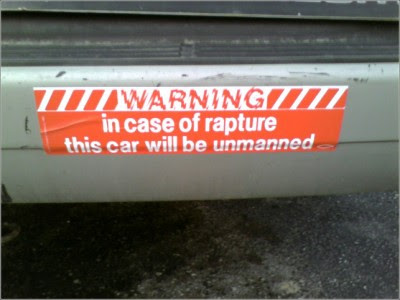 Real quick, just in case there is someone living under a rock who doesn't know what someone means when they speak of "The Rapture": at the end of the world when Jesus comes back in what is known as "The Second Coming", all the true believers are taken bodily into heaven. Zap. I once saw a bummer sticker that said, "when the rapture occurs, this car will be without a driver."

For the record The Catholic Church does not believe in "The Rapture". 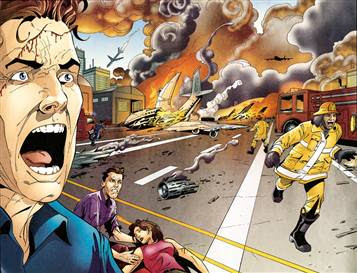 This idea that certain people will simply disappear, leaving behind their clothes for rest of us sinners to wash and fold, did not start with the Irishman to whom you refer. But John Nelson Darby is responsible for the popularity of the idea. His book and ideas spawned best sellers that have spawned all sorts of fanciful stories of planes crashing because the pilot disappears in the Rapture and families are torn asunder when Mom and son fly up to heaven and Dad and daughter are left behind to fight over whose turn it is to do dishes. Horses are riderless, groceries go unscanned, people are left hanging on the phone with no one on the other end, cars, buses and trains crash, and the pharmacist never fills your prescription. Ever. Because he flew up to heaven and left his white coat and glasses on the floor at Walgreen's.

I don't see how anyone can bother calling that last one a Rapture. That's just what happens at the end of time is all. Everyone is joined up with their bodies and off they go, for better or for worse.

I can't find any Scripture to support the notion, unless perhaps one roams through Revelations on their own making up what they think it all means. Even then...it's a stretch. I've read what got slapped up there as a scriptural reference. Sorry, don't see it.

What to tell him? "Sober up, fella! Your thoughts on whether it's going to me you or me headed for heaven are erroneous in the first place. You pray for me and I'll pray for you. Deal?"

Patron saints for you, mom and nutty sister:

St. John the Baptist, a whole new life at any age.

This should help you with the Luminous Mysteries.
Posted by Sister Mary Martha at 11:44 AM

i had a license plate border that said, "warning in case of rapture, cars yours"

This may be one of the best posts ever. No I mean - ever.

I am going to save this and hand it out as if it were a Bible tract in the hands of an evangelical.

It is forever a mystery to me that many Catholics, primarily those (ahem) "fallen away" site the Rapture for a reason to not come back to church.

For goodness sakes kids - WE ARE CATHOLIC! Drink up. Have fun. Keep your rosary handy.

In any event, when I tell people, Catholic and otherwise that the endtimes is "not theologically supported by the canon of the Church"(maybe I need a new approach?) they still eye me suspiciously.

However, if I have copies of this post to back me up, I should be in great shape.

And I sure do loves me some Saint Dymphna.

I just wanted to tell you, Sister, that you rock. Love the blog, and especially the humorous and intelligent discussions of things like the Rapture.
How's Sister Mary Fiacre by the way?

Scripturally speaking, Rapture fanatics believe this is what Jesus was talking about when He spoke of "one being left in the field, and one being swept away," etc.

They also, once again, leave behind the context of His statement. He was speaking of the "days of Noah." Indeed, the "one who will be swept away" is not caught up with Him in the clouds, but swept away by The Flood.

I saw a funny website once about the rapture. It's a list of different signs of the coming rapture, and each thing listed (things like natural disasters, unemployment, liberalism, volcanoes, etc.) is given a certain number of points. The higher the total number of all of the things added together, the faster the rapture is approaching. Here's the site if you want a laugh:

Interestingly enough, "The Antichrist" (I can only assume they mean the Pope) is only rated at 2 out of 5. I guess they don't actually feel all that bad about him being, you know, the Antichrist and everything. Maybe he just hasn't done anything particularly Antichrist-y in a little while. That's ok though, the "Wild Weather" and "Inflation" ratings are both at 5, so they can still bump that total up high enough to try and scare people. Our total rapture index number puts us at the "Fasten your seat belts" rating, if anyone is wondering.

I think I agree with you Sister, people have been saying that the end times are near forever. And who knows? Maybe they are. Maybe Jesus will come back before I even finish writing this comment. Or maybe He'll come back in 3000 years. We know neither the time nor the hour, right? Like a thief in the night? I'm not generally a big fan of thieves in the night, but when it comes to the end times, I think I like it better that way.

Sister, I have a question about Confession...for a Protestant/evangelical friend with a fallen-away Catholic mother. To her credit, she wants her mother to have some spiritual peace/healing before the lady dies, and wanted to call a priest...but she asked me why Catholics don't believe we can go to Jesus directly for forgiveness of sins. I offered John 20:21-23 as a scriptural basis for the sacrament...but here's my question: Is confession to a priest necessary, or merely helpful? I know that it would be my choice, for many very human reasons (it is more "concrete" to speak to a real person; I recieve wise counsel & discernment from the priest; I recieve the graces of the sacrament)...but is it "required" for forgiveness? Inquiring minds want to know!

I once heard on the radio that the rapture was IMMANENT, so buy your 2year subscription to the End Times Magazine NOW!

Looks like I meant 'imminent' rather than 'immanent' which means something entirely different. Sheesh.

When I was a young teen (and very caught up in evangelical Christianity--though I was totally ignorant of any scripture or anything but the "feeling" of it), I always got very nervous on days where the clouds looked strange. I literally believed that they would crack open and Jesus would come riding on a giant horse.

Of course I never actually READ Revelation, because I was too scared. But I had no problem telling people what would happen when the Second Coming happened.

lulz to Anonymous and the whole "sky cracking open" thing...when I was a little kid, my dad told me about somebody meeting up with the devil at the crossroads. I assumed "crossroads" meant "intersection," so I was always on the lookout for satan when we stopped at red lights.

I have a catholic "evangelical" grandmother that seems to integrate her ideas about the rapture into every conversation that I have with her. What is a subtle and kind way to tell her that she's wrong about it? I'm not always gifted with your gift of "bluntness." What Scripture and other literature can I show her?

I'm very concerned that you would suggest St. Dymphna, who is the patron saint of mental illness - a very serious and real thing - as an intercessor in what seems to me to be a disagreement between two siblings where one has dismissed the other as 'nutty' because she disagrees with her. However, the fact that a person or group disagrees with us does not mean that they are mentally ill: it means that they do not share our opinion. They might be wrong, their opinion may be more irrational than ours (in our opinion) but they are not suffering from a serious and often deadly illness that robs its sufferer of identity, will, dignity and sanity.
St. Dymphna ought not, it seems to me, be invoked for a 'nutty' sister with whom one disagrees any more than St. Scholastica should be invoked if that same sister were called a 'spaz' instead of 'nutty.'
Leave St. Dymphna to look out for those of us who are actually suffering from mental illness: we need all the help we can get.

No disrespect to anyone, but a lot of these screwy evangelical fundamentalists speak without knowing what they're talking about.

Sister I have a question. I recently learned that some of my relatives who passed away a long time ago, 20+ years, that no one ever had any Masses said for them. I am thinking I should do it now but then I thought, what if they have already done their time in purgatory and are in Heaven already? Have a I wasted a Mass intention by doing that? But, then, what if they are not, then it will be my fault they are still languishing there in purgatory. How should I handle this? And what if the time frame is shorter - say they only passed away 5 years ago or even 3? I know it sounds crazy, but I feel sort of stuck and am wondering what to do. Thanks!

Have a Mass said for them anyway. If they don't need it, God will use the graces for something else. Besides, Padre Pio would pray for his father after he had been assured that his father was in heaven, because it was the prayers that he prayed and would pray that had got him there. It's the whole God's-time-isn't-our-time thing.

If you think the rapture business has got out of hand. You need only look at the new name calling business. Apparently our separated brethren insist on calling our Holy Father a 33rd degree fremason.
Am I allowed to put a minor curse on them when they call the Pope bad things in my house and think they can get away with it because they are related.